A Day Trip to Cairo

As far as archaeological attractions go, the pyramids of ancient Egypt must surely rank amongst the most iconic of them all, along with sites such as Pompeii in Italy and Stonehenge in England. Iconic sites usually achieve their status because of their mystical capital. And as mythological baggage goes, the pyramids have more than their fair share. These spectacular examples of ancient architecture are imbued with more mystery and intrigue than any other archaeological site. Not surprising then, as anyone who has visited Cairo will know, thousands of tourists visit the pyramids each day. But, as is so often the case with these iconic sites there is so much more to ancient Egypt than the pyramids. 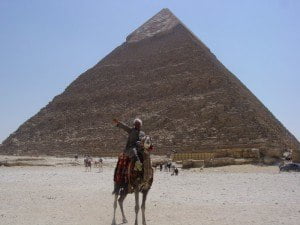 Camel Driver at the Pyramids, Cairo

My first trip was one of the many package tours; a week cruising the Nile followed by a week in Luxor. Not all cruises are the same, they vary in price and itinerary. I spent some time comparing the itineraries and chose the tour that visited the most archaeological sites. “The Jewels of the Nile” tour, I think it was called, stopped of at the Temple of Hathor at Dendera, just north of Luxor, and at many sites on the Nile all the way south to Abu Simbel in the Upper Nile. During my subsequent visits I chose to make Luxor a base, exploring that area further as well as taking day trips to other parts of Egypt – my most memorable being Cairo.

As archaeology holiday destinations go Luxor is, in my opinion, archaeological heaven. The modern city stands on the ancient city, and so the amazing temple complexes of Karnak and Luxor are just there as much a part of everyday life in Luxor today as are the modern hotels. And there are a lot of hotels. 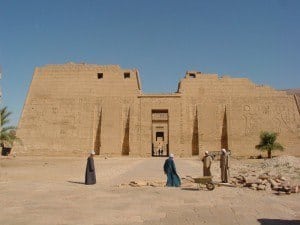 There is no hiding the fact that Luxor is a popular tourist destination. Besides the many and varied hotels, there are also many cruise boats that moor overnight in Luxor. There will always be times when avoiding bus-loads of people on guided tours is just impossible. But if it is the archaeology you are there to enjoy, you soon manage to look beyond the hoards. And it is not all bad, for instance the necropolis in the Valley of the Kings is often over-run with a bus-load of tourists, but this is often short lived. Whereas, I managed to spend a very peaceful two hours at the nearby workers’ village of Deir el-Medina.

Luxor was one of only three of ancient Egypt’s cities; the other two being Helipolis and Memphis. Also, it was the only one located in the south. During the New Kingdom it was the capital city of Egypt – a period in which Egypt was at its most prosperous and powerful. Not only was the city the political centre of Egypt it was also a major religious centre, with an incredible flourishing of art and architecture. And it is to these highly decorated monuments on a grand scale that tourists come to see, and with good reason.

The modern city, and most of the hotels, is located on the East Bank of the River Nile. Here you have the temples of Karnak and Luxor, the Luxor Museum and the famous Winter Palace Hotel. A felucca ride takes you across the Nile to the West Bank, and such sites as the Valley of the Kings, Valley of the Queens, Hatshepsut’s temple, and the workers’ village of Deir el-Medina to name only a few. And when, if you ever do, exhaust your options in Luxor, you are only a short flight away from Cairo, Aswan or Abu Simbel.

A day trip to Cairo? That does sound rather extravagant, but not if your starting point is another city in Egypt. Which is exactly what I did during my last visit to Luxor in 2003. Having written quite a bit on the debate about the nature of the relationship between Niankhhnum and Khnumhotep I really was itching to visit their tomb in Saqqara, about 30 kilometres south of Cairo. 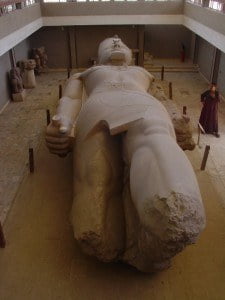 The Colossus of Ramses II, Memphis

The staff at the hotel I was staying in could not have been more helpful. For $300 for two people, they arranged everything, including return air tickets to Cairo from Luxor, the necessary airport transfers, a private and knowledgeable guide with private transport while in Cairo and lunch in a great (air conditioned) restaurant. This did involve an early start and a late return, but it was worth it.

Not only did I get to visit Niankhhnum and Khnumhotep’s tomb (it is so well documented seeing the real thing did not give me the elusive clue I must admit I was hoping for), I saw everything and more I might have put on my wish list, including the stepped pyramid in Saqqara, the remains at Memphis, the Sphinx and the pyramids, as well as the national Egyptian Antiquities Museum on the now well known Tahrir Square, with Tutankhamun’s solid gold death mask. Of course, as with any organised tour in Egypt there were the obligatory stops at carpet and perfume factories.

As day trips go, this has to be one of the most memorable I have had. But then again I should confess my history with day trips is not that good. I chose 1 May for a Eurostar day trip from London to Paris. One of the very few days in the year when everything shuts in Paris, and I mean everything!

Some people think that Egypt is just far too dangerous a country to even contemplate taking a holiday there. Over the last 14 years there have been only four high profile incidents at tourist resorts that have resulted in foreign casualties, so it is perhaps not without reason some think that it is not safe to travel to Egypt. Recent events in Egypt and elsewhere in north Africa only serve to reinforce that perception. 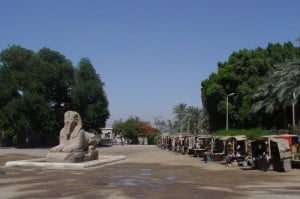 During each of my visits to Egypt I can honestly say that never once did I feel my personal security was in any danger. I greatly enjoyed each visit and would not hesitate to return tomorrow. Today, neither the US nor the UK governments advise against travelling to Egypt. Obviously, anyone thinking of travelling to Egypt should consult the information produced by these two governments specifically for travellers (links below).

If you are considering travelling to Egypt I would strongly urge you to go ahead. Certainly unless there is any significant escalation of security issues. Egypt relies on its tourism industry, now more than ever. And given the West’s meddling in the affairs of the Middle East and North Africa I think now is not the time to abandon the region. I would be as apprehensive today about going to London or Paris as I would be for Egypt. I do appreciate this is about personal perceptions, but given the current information at hand, I do not perceive any greater risk involved with travelling to Egypt now than for many other places in the World.

For archaeophiles planning a trip to Egypt, and wanting to see as much as they can but without unlimited time, I would definitely recommend staying in Luxor. It may be a cliché but it is true, there really is so much to do and see. If the pyramids or the massive rock temples at Abu Simbel are on your must-see list of sites in Egypt, this is easily and inexpensively done by taking a day-trip from Luxor to Cairo and Abu Simbel.

If you have the stomach for a cruise on the Nile, I recommend a 7-day cruise from Luxor to Aswan. From Aswan you usually have the option of a bus trip to Abu Simbel. Then, recover from your cruise with a week in Luxor, during which time a day trip to Cairo will give you everything you could possibly have hoped to see and more.