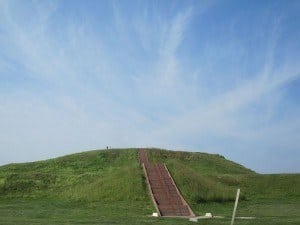 Cahokia Mounds are the remains of what was the largest and most complex urban settlement in the USA before the arrival of European colonists. The earliest evidence for human activity here dates to about 500 AD, and by 1200 AD there were over 120 mounds and covered an area estimated at about six square miles. It is thought that there were as many as 20 thousand people living in the city. No settlement in the USA would be this big until 1800 AD. Today the archaeological site, and interpretative centre, is in Cahokia Mounds State Park just east of St Louis and on the other side of the Mississippi River, which gives its name to the culture that built these impressive mounds.

The largest structure on the site, called Monks Mound because a community of monks live here soon after Europeans entered the area, is a four terraced platform mound. It is he largest prehistoric structure north of Mexico, 30 metres high, 290 metres by 255 metres, and covers an area of 5.6 hectares. Excavations have revealed that it went though a series of building phases, ten in all. But at its height this structure would have been the central focus of the city. Excavations also revealed evidence for a large building on the top, 32 by 15 metres. In front of the mound is where the city’s main plaza is located, which is where various games and rituals would have been performed. This area was flattened and prepared by huan, it is not a natural feature.

Perhaps one of the most enigmatic features of the site is the so-called ‘woodhenge’. A series of post-holes in a circle was discovered by archaeologists, creating something of a timber circle much like the more well known stone or wooden circles in England. The placement of the circle was quite precise and seems to have been used to marked solstices and equinoxes. The timber posts placed in the circle today are a reconstruction.

Where is the Cahokia Mounds State Historic Site?

Cahokia Mounds in the News

The photograph on this page is in the public domain, taken from Wikipedia