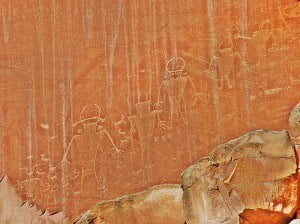 The petroglyph panel above Highway 24.

Capitol Reef National Park is one of the USA’s National Parks, established in 1971. The park takes its name from the white dome-like sandstone geological feature that visually resembles the Capitol Building in the American capital city of Washington DC. In fact the park is a well known for its striking and varied landscapes, which makes it very popular with day-trippers and hikers. Archaeological sites in the park range over thousands of years in date, from some of North America’s earliest peoples to the farmsteads of the first Europeans settling in this area in the 1800s.

The most visible and easily accessible archaeology to the park’s visitors are the petroglyphs created by the Fremont Culture. Between 600 and 1300 AD these people lived a largely foraging lifestyle, but they also farmed corn, beans and squash. A number of the petroglyph panels have been made accessible to visitors. Including one on Highway 24, where there is a designated parking area and a short trail to the panel. There are also easily accessible petroglyphs in Capitol Gorge.

There is a well documented history of the early European visitors to this part of the United States. European surveyors were in the area in the late 1700s, and the first European settlers came in the 1800s. In the park are the remains of one of these settler communities, Fruita at the junction of Fremont River and Sulphur Creek. Anyone who has visited the park will appreciate how crucial these water supplies were. Todays visitors to the park can see what has survived from this early settler community, including a schoolhouse and an orchard.

Where is Capitol Reef National Park?