Hidden away just a few miles north of the Atlanta metropolitan area is the often overlooked Etowah Indian Mounds Historic Site. The site is one of the few remaining examples of the mound building Mississippian culture, and represents the most intact instance of a site of this kind in the southeastern United States. Although pottery suggests the first settlement here between 200 BC to 600 AD belonging by the Swift Creek culture, the Etowah Indian Mounds complex was constructed and inhabited later, from around 1000 AD to 1550 AD by Native Americans of the South Appalachian Mississippian culture. Max recently visited the site and shares his impressions. 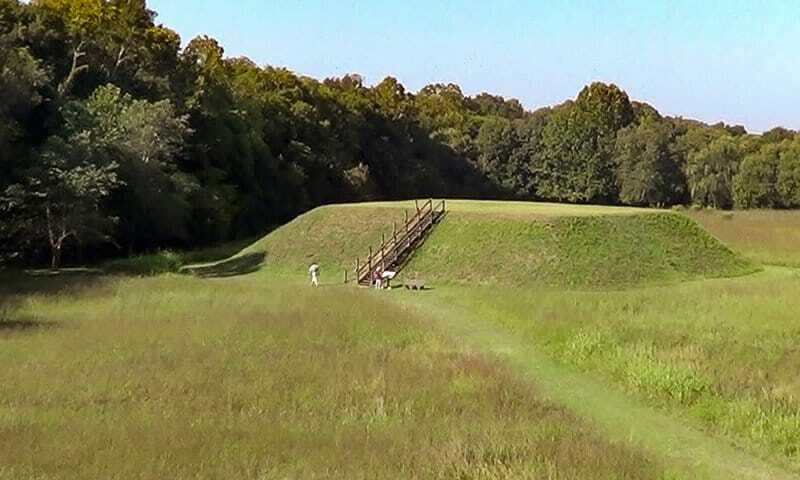 The now reconstructed mound C – excavated in stages by archaeologists from 1883 to 1961.

Upon arrival at the Etowah Indian Mounds Welcome Centre you are presented with the option to either first visit the museum dedicated to the site or to head outside and experience the mounds themselves. I chose the latter. After walking through the doors you are met with a reconstruction of a wattle and daub house, a particular kind of wood and clay construction utilised during the settlement’s heyday between 1250 and 1325 AD. Next to the house is an information board explaining the archaeology behind this type of dwelling, as well as the history of the reconstruction itself. The reconstruction is the result of a collaboration between Native Americans, the Etowah staff and local volunteers. Further information panels are to be found throughout the site and they provide interesting details about the archaeology of the mounds. 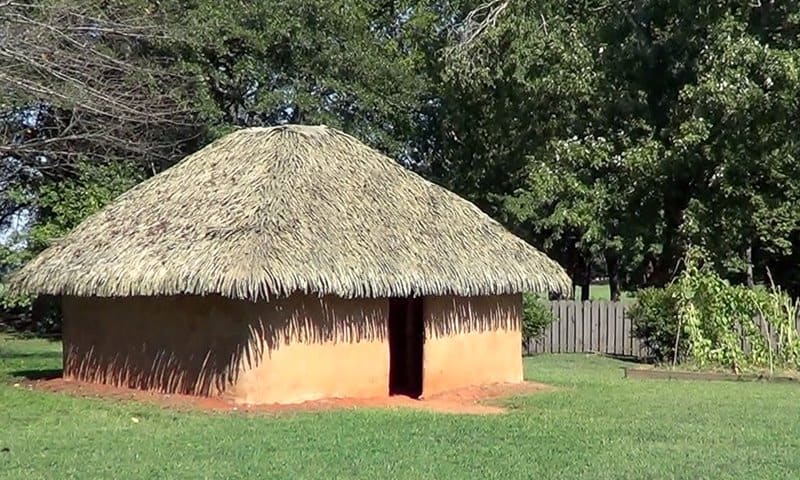 The reconstruction of this hut was a collaborative project between local Native Americans, site staff and volunteers.

A short walk further and you are at the mounds.

What immediately struck me is the size and unnatural quality of these human-made hills on what is an otherwise flat terrain. The three surviving mounds are such a dramatic feature in the landscape that it is impossible not to let your imagination run wild and think of how these earthen pyramids were constructed and what they may have looked when they were the central feature of a lively settlement of several thousand people. As you wander around the site think about what life may have been like for the people who once lived here. Once a political and religious centre for the region, the Etowah mounds must have been a bustling and dynamic place. 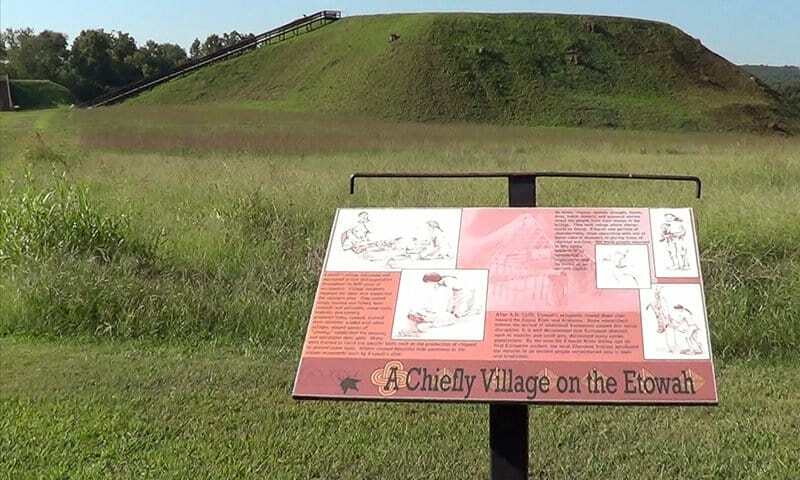 One of the many information panels, with Mound A in the immediate background and Mound B in the distance.

The Mississippi River, after which the Mississippian culture is named was a central feature of Mississippian society, just as how the people at Etowah owed much of their livelihood to the Etowah River. The rivers served not only as a source of food but also as a means for transportation of people, goods and culture. The South Appalachian Mississippians, a regional variation of the Mississippian culture who inhabited much of the southeast, became influenced by their Middle Mississippian neighbours to the northwest at around 1000 AD and started to adopt Mississippian traits. The mounds at Etowah were first thought to have been built by the Iroquoian-speaking Cherokee who inhabited the area at the time of European contact. The Cherokee, however, attributed the mounds to an ancient people known only through their oral tradition. The site was later discovered to have been developed by the ancestors of the Muskogean language speaking Creek Indians.

The Etowah settlement started to develop during the early Mississippian period (1000-1200 AD), a period which is broadly characterised by various groups coming together and transitioning from hunter gatherer societies to more stationary, complex, and centralised chiefdom based on rapid population growth do to increased agricultural production, in particular maize. The site is made up of a total of 6 mounds; the three main platform mounds A, B and C located at the western edge of the site as well as 3 minor mounds D, E and F to the east. The two groupings were separated by a raised ceremonial plaza which served as a kind of town square and was used for ceremonies, games such as stickball and chunkey, as well as a marketplace for the trading of goods.

Mound A, also known as Temple Mound, stands 63 feet (19 metres) high and at its base covers an area of about 3 acres (1.2 hectares). It is thought that the chief’s home and temple was on top of this mound and it is from here he probably presided over religious ceremonies. Through the use of magnetic surveying which took place from 2005 to 2008, following an earlier excavation on the mound’s summit in 1994, archaeologists have established that this mound had four major structures in addition to a courtyard. Also excavated in 1994 on Mound A was a 22 feet (6.7 metre) wide staircase. This ran from the base of the mound to the top, on the side facing the plaza.

Mound A in the foreground and Mound B in the distance. You can see how much taller Mound A is than Mound B.

Nowadays, each mound has a wooden staircase enabling easy ascent to the top, where particularly in the case of mound A – the largest of the six – one can enjoy views of the entire site from a perfect vantage point. Mound B, whose construction began between 1100 and 1200 AD now stands at around 25 feet (7.6 metres) high. After a short period during which the site was abandoned, construction of the mound continued from 1250 to 1325 AD. During excavations at the top of Mound B the traces of a series of postholes were found. The pattern and nature of the postholes suggest the structure was some kind of circular hut.

Mound B, on top of which archaeologists found traces of a structure thought to be restricted to elite members of the community.

Mound C, the Burial Mound, is the only one of the three to be completely excavated. It is smaller than the other two standing at around 10 feet (3 metres) high and was constructed in several stages from 1250 to 1375 AD. After test excavations in 1883 by members of the Smithsonian Institution, the excavation of this mound began in earnest in 1925. It was from excavations of Mound C that many of the beautiful artefacts were recovered, which are now housed in the site’s museum. Many of these objects are dated to the settlements most prosperous period: the Middle Mississippian period (1200-1400 AD) which is characterised by widespread expansion and development of Mississippian traits throughout the region and the expansion of political and ceremonial complexes like that at Etowah.

The Late Mississippian period (1400-1550 AD) saw the gradual decline of settlements like Etowah. It is a period characterised by increasing instability due to a theorised drought which led to maize shortages and over consumption of natural resources from increasingly concentrated populations. This led to war, population movement and the construction of fortified population centres – as seen at Etowah. It is also thought that the introduction of European diseases assisted in the widespread collapse of Mississippian society.

As I continued my walk past the mounds and along the Etowah River on the southeastern edge of the site I could see how the river would have served as a useful natural barrier for the protection of the settlement. The Etowah settlement was in fact at one point completely enclosed by defences. Utilising the pits from which the earth used to construct the mounds originated, the people at Etowah linked them with a series of defensive ditches which were further backed up by a wooden palisade surrounding the entire complex. You can see how this worked in the drawing below of what the settlement looked like. 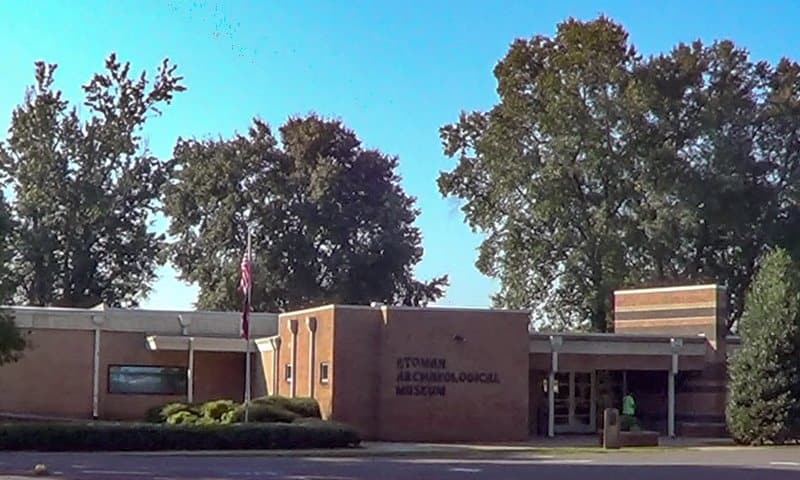 The museum houses a number of the artefacts recovered from the 20th century excavations at Etowah.

After completing my tour of the mounds and the riverside I made my way back to the museum. I was pleasantly surprised by a large assemblage of artefacts from the site, including two magnificent marble effigies of a couple, which were excavated from Mound C. There is also a theatre where an informative film of high production quality is shown.

If you happen to find yourself in the Atlanta area I would say the Etowah Indian Mounds are well worth a visit. A number of online reviews comment on what a great find this site is, and what a pleasant day was had by all. 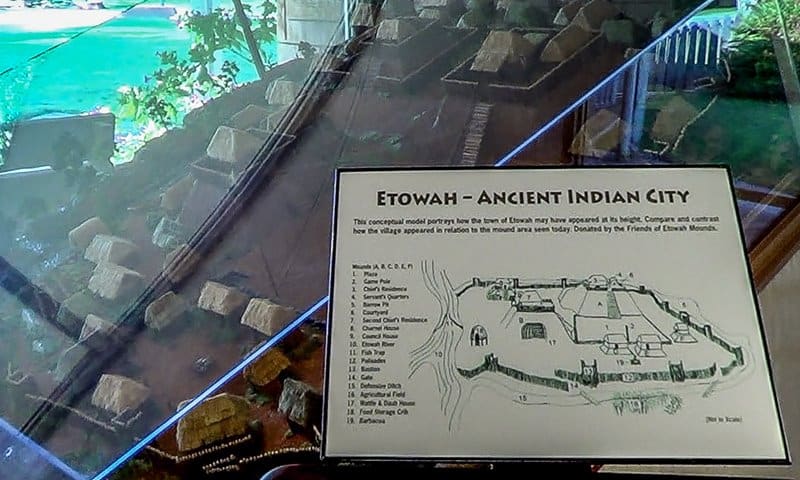 A model of the Etowah settlement as it might have been.

Every day from 09h00 – 17h00 (The mounds area closes at 16h30)
Closed on the following days: Thanks Giving, Christmas and New Year

Besides the 6 Earthen Mounds, there are reconstructions of houses to see, a nature trail through the park and a film about the Etowah Indians in the Visitor Centre

The average time to tour the site and the museum is about an hour and a half.

Make sure you are wearing comfortable walking shoes.

And in the summer be sure to have water and a hat – it can get quite hot. Avid the midday heat by going early in the day or just before closing. 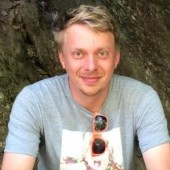 I am a certified archaeologist working in the Netherlands with a focus on fieldwork in prehistory. After earning my degree in archaeology from Leiden University I expanded my interest to encompass a variety of topics including visual anthropology, human evolution and ritual and meaning. I feel it is important to cultivate interest among the public so, along with my work, I am passionate about developing strategies to actively engage and share archaeology with the community.