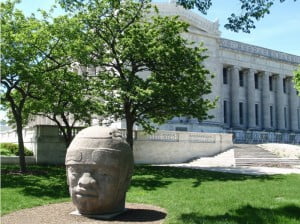 The Field Museum is one of three institutions that make up the Museum Campus on the lakefront of Lake Michigan in Chicago. The museum began as a repository for the vast number of objects and exhibitions that had come to Chicago in 1893 for the World’s Columbus Exposition. Today the museum has over 24 million artefacts and specimens in four broad areas, anthropology (including archaeology), geology, botany and zoology. Some 50,000 ethnographic and archaeological artefacts were on show at the exhibition of 1893, today the museum has over a million and a half such objects from all over the World.

Much of the development of the anthropology and archaeology collections in the Field Museum since 1893 has been a result of research undertaken by museum staff. The internationally significant Mesoamerican collection, for example, derive in part from excavations carried out by Eric Thompson and others.

Highlights of the archaeological collections include:
Sen-Worset III was a Pharaoh in during Egypt’s Middle King’s. His funerary boat is at the museum, and is only one of six such boats outside Egypt. This was the artefact that the scientist Willard Libby of the University of Chicago used to help him calculate the half-life of radiocarbon, when he was working on developing the technique much of archaeology benefits today, radiocarbon dating – for which he won the Nobel Prize in Chemistry in 1960.

A number of the artefacts in the museum’s Roman collection come from a Roman Villa site near Pompeii, and were buried by the eruption of Mount Vesuvius in 79 AD. Besides these objects are a number of replicas of artefacts recovered from Pompeii, including bronze sculptures and other everyday implements such as pots and pans.