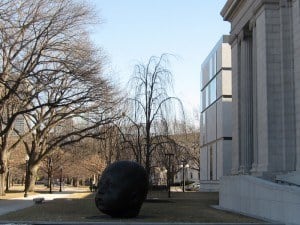 The Museum of Fine Arts in Boston opened in July 1876, and moved to its present location in 1909. Over the years the museum has created one of the most significant collections of ancient and contemporary art in the World. Perhaps one of the most significant transformations was the opening in 2010 of the wing for the Art of the Americas. In 53 galleries over 5,000 objects spanning three thousand years tell the story of art in the Americas, from prehistoric times to the 20th Century. The museum also has an extensive collection of art from the Ancient World, over 83,000 artefacts, ranging from 9,000 years ago to 600 AD.

The Ancient World collection includes objects from Britain to Afghanistan, including sculpture and architecture, coffins and mummies, coins and jewellery, weapons and musical instruments.

Of particular interest in the Egyptian collection are a number of artefacts from Armana demonstrating the change in religion and artistic style during the reign of Akhenaten. Also from the Nile is an impressive collection of Nubian artefacts, which includes a granite royal sarcophagus, colossal stone statues, as well as fine gold and silver vessels and jewellery. These Nubian objects come from excavations undertaken by the Museum’s Dr George Reisner, who excavated in Nubia between 1906 and 1942.

The Classical World is also well represented at the MFA, from prehistory (Neolithic, Bronze Age, later Iron Age) to the Athenian, Roman and Byzantine periods. Of particular note are over 250 portraits of Roman Emperors and Empresses. There are a number of objects from the Ancient Near East, including one of the striding lions (in glazed brick) that decorated the walls of the processional way that led to the Ishtar gate at Babylon.