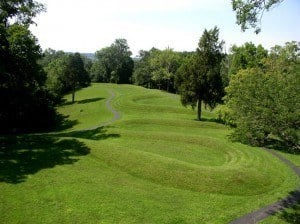 Serpent Mound is a large earthen mound shaped in the form of a recoiling snake. The tail is thrice coiled, out of which the body emerges looping back and forth seven times before ending at the head, which was placed near the edge of a cliff above a stream. The mouth of the serpent is open, and extends around a 37 metre-long hollow oval feature – as if swallowing an egg. In all the snake is over 400 metres in length and the height of the body varies from about 30 cm to a metre, making this the largest of the effigy mounds of the eastern United States. Recent excavations recovered charcoal fragments that produced radiocarbon dates of about 900 years BP, suggesting the mound was created by the Fort Ancient culture (1000 – 1500 AD).

Where is the Serpent Mound?

The Serpent Mound is in a park, named the Serpent Mound State Memorial, managed by the Ohio Historical Society. The effigy mound is sited on a plateau that overlooks Brush Creek Valley in Adams County, Ohio. Zoom in on the map below to see the features of the serpents body, described above.
[mappress mapid=”330″ width=”100%”]

Effigy mounds are restricted to the eastern and northern United States, where they are are quite common and found in many shapes and sizes, including birds, bears, bison and turtles. Their purpose and function is not well understood, and the subject of much debate amongst archaeologists. The head of serpent appears to have been aligned with the setting sun at summer solstice, and the coils aligned to both solstice and equinox sunrises in summer and winter. This alignment suggests that Serpent Mound had an astronomical ceremonial purpose.

Native Americans believe snakes to have been powerful supernatural creatures of the underworld. Snakes are in fact quite common in late prehistoric art of various Native American groups.