The Hashemite Kingdom of Jordan is well known, and on many bucket lists because of, the archaeological site of Petra. Most people have seen the extraordinary rock cut tombs of the ancient Nabataeans. For anyone planning a visit to Jordan, there is more striking historical architecture to explore. Once the Byzantines and Christian Arabs were defeated by Muslims, the first Caliphate was followed by the Umayyad Dynasty. During their brief rule, 661–750 CE, the Umayyads built a series of ‘Desert Castles’ that must be on any Jordan itinerary. Later from the 11th century CE, when the European Christians attempted to take back control of the Holy Land during the Crusades. The Crusaders constructed some very imposing fortifications, as did the Muslims defending the area against their attacker. Many of these fortifications and castles in Jordan are popular tourist attractions, and are easy to get to by joining a guided tour or solo.

Visiting the Best Desert Castles on a Day Trip from Amman

Jordan has a number of the Umayyad desert palaces. Quite a few of these are open to the public and easy to get to. And there are even a few guided tours to the best desert castles. Whether you go solo or take a small group tour, don’t miss them! 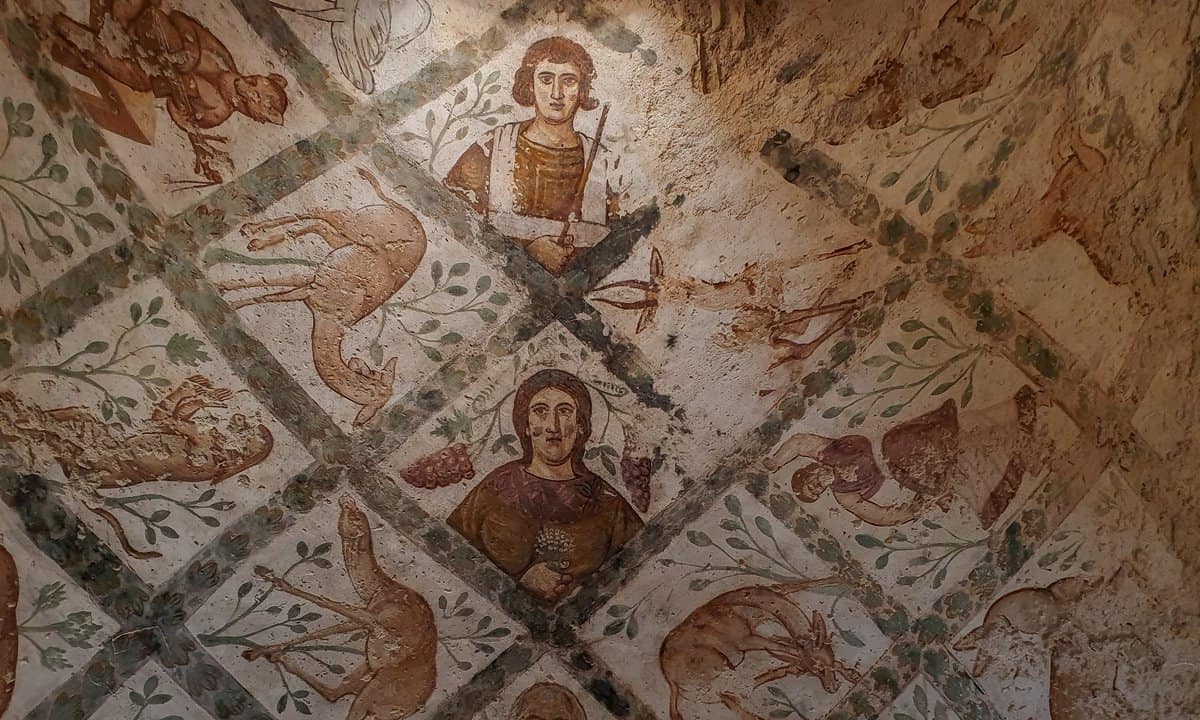 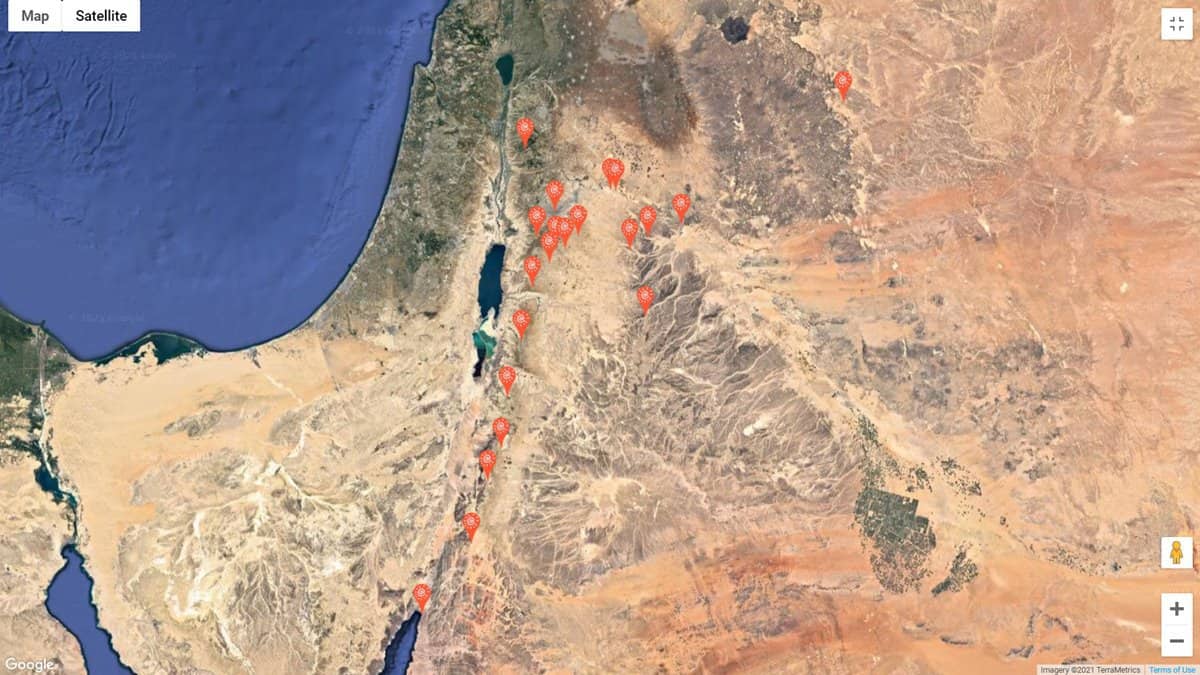 Map showing the distribution of castles and palaces in Jordan, including the Umayyad castles and palaces as well as the castles built by Crusaders and Muslims in their conflict. Notice how the castles follow a line, particularly in south Jordan. This line is the ancient king’s highway. It was an important trade route that connected north Africa with Mesopotamia. Control of this route was as important for the Umayyads as it was for the Crusaders and the Muslims. Follow this link for an Interactive Map of the Castles and Palaces of Jordan >>

Desert Castles of Jordan – the Umayyad Castles and Palaces

Between about 661 and 750 CE a number of ‘desert castles’ were built throughout the semi-arid Umayyad province of Bilad al-Sham. An area that roughly corresponds to modern-day Jordan, Syria, the West Bank/Palestine and Israel. Although there are exceptions, there are shared features. Most the castles and palaces seem to be square, much like Roman forts. In fact a few were built on the ruins of abandoned Roman castra. They had grand entrances, as well as a hamman (bath house), a mosque, agricultural buildings. Many have exquisite decoration. They all seem to have been all but abandoned after the end of the Umayyad Caliphate in 750 CE.

Traditionally these structures were thought to be rural residences of the local Ummayyad rulers. But the position of these centres along major routes and near water sources suggests they were more than palatial country residences. The extravagant architecture was a political statement to impress local tribes. They would also have enabled rulers to control routes, to monitor and tax the movement of people and their livestock through the desert. 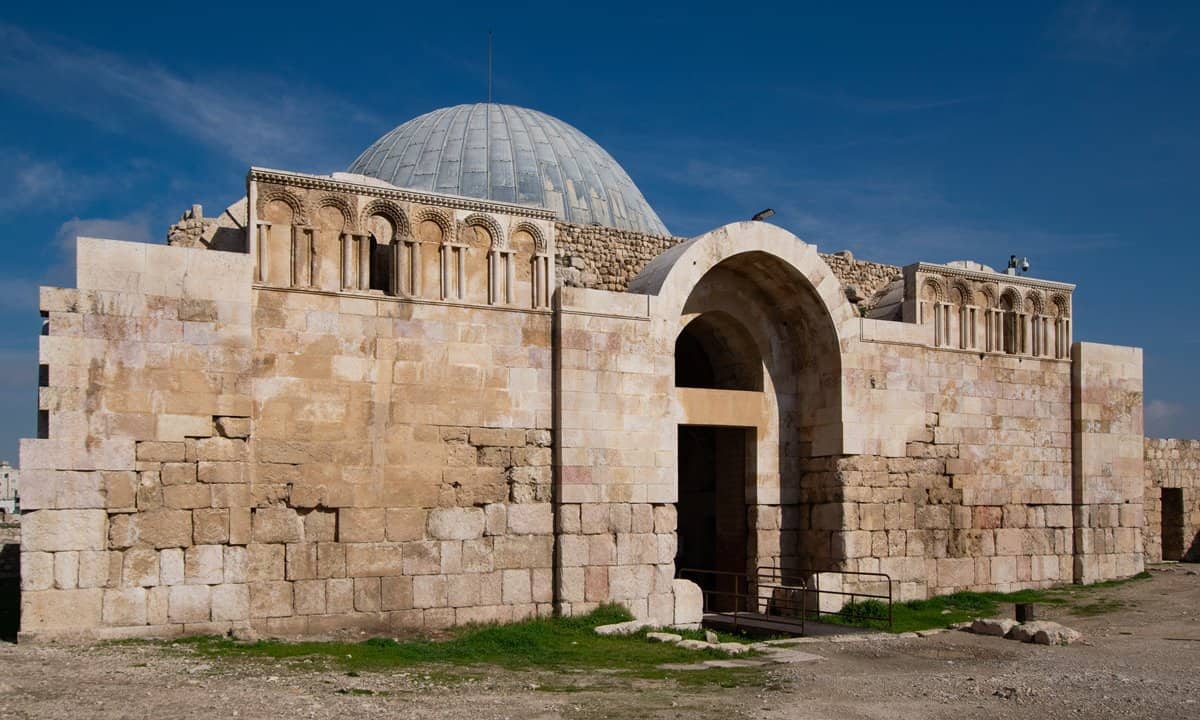 The imposing gateway to the Umayyad Palace in Amman.

The Citadel is a complex archaeological site at the historic centre of Amman. It has an imposing presence on most of the older parts of the city around it. And it is what would have been the monumental, domed entrance to the Umayyad palace that is one of the the Citadel’s most visible feature. This is the formal entrance to the Umayyad palace. And the palace was built on the platform that was created by the Romans for a temple. In 749 CE an earthquake destroyed much of the palace, after which it was remodelled by the Abbasids. The interior courtyard to the castle at the top of this page.

Very little is known about this castle. An inscription found in one of the rooms suggests it was built before 710 CE, making this one of the earliest examples of Islamic architecture in the area. The square structure is 35 m on each side, with circular corner towers and a rounded entrance that project. Sixty rooms are spread out over two floors, arranged around a central courtyard. It is unlikely this is a castle, the features do not match other Umayyad castles. Rather it may very well have been a caravanserai, a roadside inn. 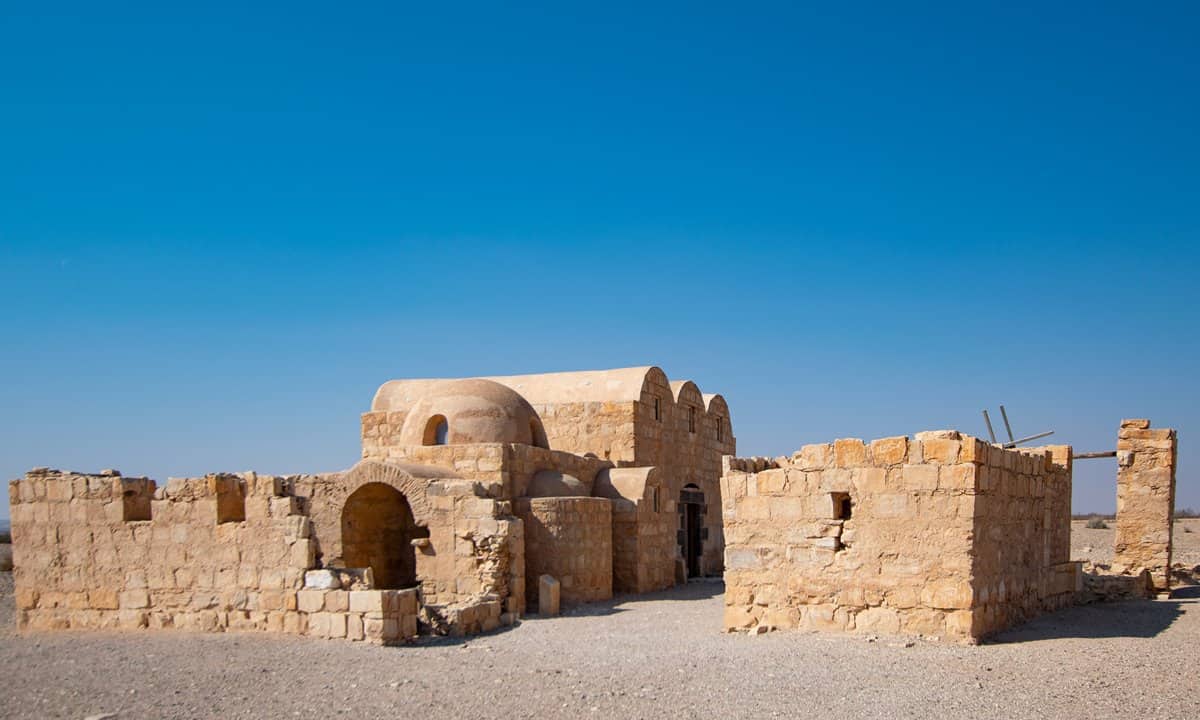 What remains of Qusayr ‘Amra today, a small country cabin.

Initial impressions when pulling up here should be ignored. What appears to be a rather small set of unimposing ruins soon turns out to be one of the more spectacular of the desert castles. What you see today is all that remains of a larger castle complex, which was build by an Umayyad prince as a royal retreat, with no military function. All that stands now was a small country cabin, with many remarkably well preserved frescoes on the ceilings inside. The bathhouse is one of the oldest surviving remains of a hammam in the historic Muslim world. The entrance to the blue (or black) castle on the outskirts of Azraq.

Strikingly black as a result of being made from local black basalt, the castle is situated next to an oasis that is the only natural source of water in a vast area. The history of the site starts with the Romans who established a military fort. The Umayyads built a mosque, but much of its current form is from 13th century, when the castle was developed the Ayyubids. Following Ottoman occupation, T.E. Lawrence based his operations against the Ottomans here between 1917 and 1918. This connection to “Lawrence of Arabia” is a great pull for many tourists. A section of the reconstructed and highly decorated façade in Berlin.

The façade of the palace of Mshatta was a gift to Kaiser Wilhelm II from the Ottoman Sultan Abdulhamid II in 1903. This section is 47 m long and 5 m high, and is highly decorated with grapevines, animals and fantasy creatures. The original site of the Umayyad palace is about 30 km south of Amman, just north of the runway at Queen Alia International Airport. Qasr Mshatta, Arabic for winter palace, is a square complex surrounded by a wall about 1.7 m thick with 25 towers. The site can be visited, although a project is underway to make the site more suitable for visitors.

The Crusades as applied in the eastern Mediterranean refer to a series of military campaigns from 1095 to 1271, the aims of which was to take back the Holy Land from Islamic rule. These campaigns were supported and often even organised by the Latin or Catholic Church. In Jordan Crusader activities were centred on an area known as Oultrejordain, old French for ‘beyond the Jordan (River)’. The area stretches from the Zarqa River in the North through the Negev Desert to Aqaba on the Red Sea in the south, with the Dead Sea and Jordan River as the western border, and the Muslim caravan and pilgrimage routes in the east.

Until 1100 the Fatimids of Egypt controlled the region. With the arrival of the Crusaders the Fatimids withdrew without contents and local desert groups made peace with the Europeans. Baldwin I, the first King of Jerusalem, established the first crusader stronghold at Montréal Castle, in 1142 this transferred to Kerak Castle. In 1187 Saladin, the founder of the Ayyubid Dynasty, invaded the region and by 1189 had conquered all of Oultrejordain and destroyed all the castles. From then on the region would forever be under Islamic rule. The restored ruins of Montréal Castle.

Montréal (from Mont Royal) is a Crusader castle built on a conical hilltop that is known by Jordanians as Shoubak Castle. Given it’s proximity to Petra, it is a popular stop for visitors when travelling between Amman and Petra. The castle was built by the first King of Jerusalem, Baldwin I in 1115 CE. The strategic importance of this location is that it commanded the route between Egypt and Syria. Very little of what we see today is the original Crusader fortification – there are ruins of the curtain wall and two chapels. The visible walls and towers are 14th century Muslim additions. 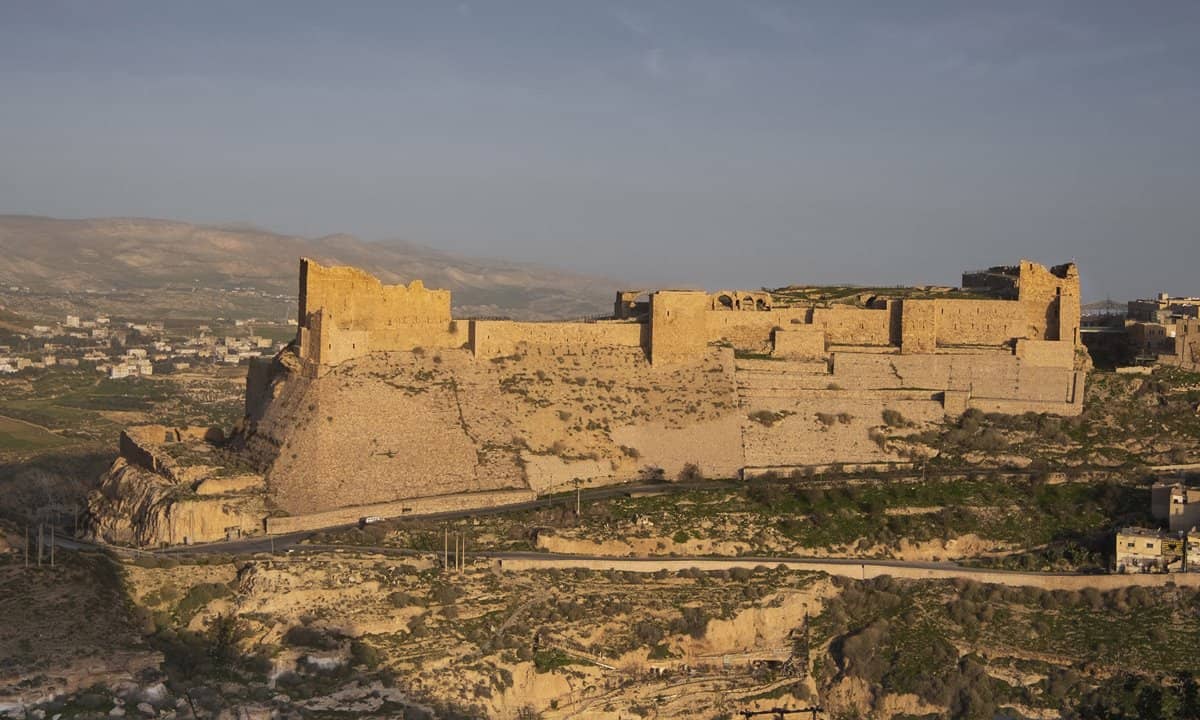 Kerak Castle in Jordan, not to be confused with Krak des Chevaliers.

Kerak Castle is one of the larger crusader castles in the Levant (but not the best preserved), and has a mix of western European, Byzantine and Arab features. Although construction of the Crusader castle started in 1140, the hilltop had been in use for some time. Nabataean reliefs and sculptures have survived, and later it became the Roman centre of Characmoba. The castle houses the Karak Archaeological Museum, which covers local archaeology from prehistory to the Islamic era, as well as the history of Crusaders and Muslims at Kerak Castle. The entrance to the hilltop Ajloun Castle.

Ajloun Castle is considered one of the finest examples of Islamic Ayyubid military architecture. And for this reason it is a popular tourist attraction. Built under instructions from Salahuddin in 1183 CE, it served, quite successfully, to halt the incursion of the Crusaders into the region. Strategically located on a hilltop, the castle also served to protect local mining operations as well as the routes between Damascus and southern Jordan. Visitors follow a path, through which the stages of the castle’s construction are clearly noticeable. The entrance gate to Aqaba Castle.

This is the supposed site of a Crusader castle that destroyed in 1187 when Saladin invaded Aqaba. No remains of the Crusader castle have been found, prompting some to suggest this was not the location of the Crusader’s castle in Aqaba. What we see today was built, or rebuilt, for the Mamluk Sultan in the 16th century. Later in 1917 it was here that the Arab Revolt successfully defeated the Ottomans. Lawrence of Arabia rode from here to Cairo to report the news. Today the Aqaba Flagpole, flies the flag of the Arab Revolt that commemorates the Battle of Aqaba.

Guided Tours to the Castles of Jordan

The following are recommended tours that will get you to the castles mentioned above. Combine a trip to Petra to see the crusader castle at Shoubak. Similarly, see the Roman ruins at Jerash and Umm Qais adding as stop at the striking Ajloun Castle.