The eastern limit of South East Bulgaria is the Black Sea. And as a coastal region with extensive sandy beaches, this is the most visited region in Bulgaria. The most popular and largest beach resort is Sunny Beach, a strip of some 800 seaside hotels along the Black Sea Coast well known for its wild nightlife, attracts mostly international tourists. Just along the way is the ancient town of Nessebar, a UNESCO World Heritage Site that is said to have the highest number of churches per capita. This and other ancient cities (Sozopol is another ancient site well worth visiting) were first settled by the Greeks, but were also important ports for the Romans, Byzantines, the Bulgarians and the Ottomans. Further inland there are many archaeological sites from the Thracians to the Ottomans. In the west is the national archaeological reserve of Kabile, one of the the most important Thracian settlements in Bulgaria. See also: Introduction to the Archaeology & History of Bulgaria

The south east region includes the provinces of Burgas, Sliven and Yambol. Along the ridge of a large promontory into the Balkan Sea are a series of natural outcroppings of megaliths, large, weathered, volcanic rocks. Although the grouping of stones is definitely natural, it does appear as if the ancient Thracians made use of some of these settings for ritual or religious purposes. Many of the stones have traces of carvings, and excavations in and around the stones have produced considerable deposits of ancient pottery – some early Iron Age in date. Photo © Vmenkov 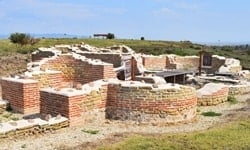 The Archaeological Reserve of the Thracian and Ancient City of Kabyle is an area around a low hill on the Thracian Plain that has been inhabited more or less continuously from about 3,000 years ago to the 14th Century. An onsite museum takes visitors through each stage of this complex history. And a series of trails lead visitors around the site to see the best archaeological features. And all with stunning views across the plains to spectacular mountains. Sozopol is one of the oldest cities on Bulgaria’s Black Sea coast, founded by the Greeks in the 7th century BC. The city’s museum housed in the St. Cyril and St. Methodius Temple covers the history of the area, from nearby Bronze Age settlements to 17th – 19th century Christian art. Besides an extraordinary collection of ancient Greek vases, another highlight of the collection is an alabaster casket said to contain the relics of John the Baptist – found on the nearby island of St Ivan in 2010. [Website] Photo © Bulgariatravel.org