Berlin is a city of international culture and World changing history, well known for diverse architecture, contemporary arts and music, festivals and night-life. Perhaps this is not the first European city to spring to mind as a destination for archaeology – but the spectacular Prussian heritage along with the many monuments and memorials associated with the time of the Third Reich and World War II aside, Berlin has the World’s finest collection of museums with some of the most important artefacts and objects from all corners of the earth.

Archaeological evidence, although not extensive, suggests that the area in and around Berlin was inhabited as early as the Bronze Age. Thereafter, it is the remains of wooden houses that date to the end of the 1100s that provide evidence for sustained human settlement in the area; specifically the land around the island in the Spree River that is now called MuseumsInsel. However, the timber-framed buildings to the east of MuseumsInsel are not Medieval originals, rather they are much more recent reproductions.

Berlin was given its town charter in the 13th century, and it is generally accepted to have been founded in 1237. Frederick I was the first in a long line of rulers from the Hohenzollern royal family to rule the area (1688 – 1713), and declared himself the first king of Prussia in 1701. Kings from this family ruled in Berlin until 1918, first as electors of Brandenburg, then as kings of Prussia, and finally as German emperors. And it was this royal family who are largely responsible for the Prussian castles and palaces in and around Berlin – as well as the museums on MuseumInsel.

Walking Tour of Berlin
For a great introduction to Berlin’s history, take an introductory walking tour of the top historical sites and monuments in the city, then explore at your leisure. This tour is available as a One Hour Tour or a Two Hour Tour.

Berlin’s first castle-fort was erected in 1443 on the island in the Spree River. A much grander Italian Renaissance style city palace replaced the castle in the 16th century, which was in turn replaced by a Baroque palace in the 17th century. The Berliner Stadtschloss (Berlin City Palace) was the winter residence of the Prussian Kings, while they lived in the palaces at Sanssouci in Potsdam during the summer. Charlottenburg Palace was also built for these royals, during the 17th and 18th century, and is today the largest palace in Berlin and the only surviving residence of the Hohenzollern family in the city. At the beginning of the 19th century the first museum, the Altes Museum, was constructed on MuseumsInsel followed shortly after by the Neues Museum and then the other three.

After German Unification in 1871, the Stadtschloss became the seat of power for the German Kaisers. And it was from a balcony on the palace that in November 1918 over four hundred years of royal occupation of the castle and rule over Berlin and the German Empire (1871 – 1918) came to an end with the declaration of the German Social Republic, the so-called Weimar Republic.

Other Prussian buildings that should not be missed include the Neue Wache, or the New Guard House, which was designed by the same architect who designed the Altes Museum – Karl Friedrich Schinkel. Built in 1819, it was intended as a guard house for the Palace of the Crown Prince, Kronprinzenpalais. Since 1931, however, it has been a war memorial, with a shift in emphasis on the dedication reflecting the changing politics in Germany since then. It is now called the Central Memorial of the Federal Republic of Germany for the Victims of War and Dictatorship, and directly below the oculus and thus open to the elements is a moving sculpture of a Mother with her Dead Son, which is based on a smaller sculpture by Käthe Kollwitz. 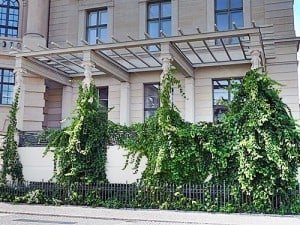 On the other side of Unter den Linden, diagonally opposite the Neue Wache, is the Altes Palais. The neoclassical palace was the residence of King Wilhelm I, the first German Emperor following the Unification of Germany in 1871. Of particular interest here is the Caryatid Pergola – destroyed along with the rest of the palace during the second World War, it was finally restored in 2007. The caryatids here are not as detailed as some other examples of caryatids inspired by those on the Erechtheion in Athens, but the ancient Greek influence is obvious.

The Gendarmenmarkt square is perhaps best known as the site of the best Christmas market in Berlin. On the square are the French and German Cathedrals, and the extravagant, neoclassical Konzerthaus Berlin – also designed by Karl Friedrich Schinkel, and built in 1821 on the remains of the national theatre, which was destroyed by fire in 1817. These three beautiful buildings were heavily damaged during World War II, but have since been fully restored. The Deutscher Dom now houses a German history museum. The Französischer Dom owes its origins to the Huguenot community living in Berlin at the beginning of the 1700s, and is now a Huguenot museum.

The Weimar Republic was replaced by Hitler’s Third Reich in 1933. Archaeologists have begun excavating sites associated with Nazi era and World War II Berlin. One such site, beneath what was Templehof Airport, is the Columbia Concentration Camp used by the Nazis between 1933 and 1936 to house and torture political opponents. After the war, the camp was razed and the land used for the airport. Now that Templehof has been decommissioned and the land is being prepared for development, the remains of the concentration camp are the focus of ongoing archaeological investigation. The excavations here do much add to the accounts of survivors that are understandably now only as good as their failing memories. Another site that has been excavated by archaeologists, now open to visitors, is the former headquarters and prison of the State Security police – Topographie of Terrors, provides a chilling experience of the Nazi reign of terror, and adds an important site to the other monuments and memorials associated with this period of the city’s past.

Take a three-hour tour of Berlin with a historian, exploring Jewish history from the 19th and 20th centuries. This tour covers Jewish culture in Berlin during the Middle Ages and the Renaissance, the persecution of the Jews from the 1920s through to the Third Reich, and the renewal of Jewish life in Berlin today. More Details and Book Online >>

One of the more interesting and highly contested spaces in Berlin today is the Schloßplatz, or palace square, and the land where the city palace once stood. 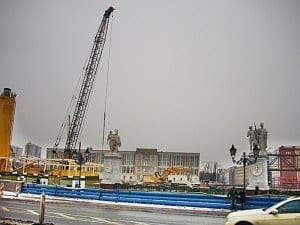 The Baroque city palace was all but destroyed by the end of the Second World War. The German Democratic Republic (GDR), not sympathetic to the castle and what it stood for, had the ruins demolished (1951) rather than attempt any restorations. Some Berliners risked their lives by saving certain elements of the castle, some of which can be seen in the Humbolt Box today. The balcony from which the republic was declared was preserved and used for the entrance to the GDR’s Council of State building (photograph right), now the European School of Management and Technology.

In keeping with the new political ideology of the GDR, the square was renamed Marx-Engels-Platz and the ‘Palast der Republik’ replaced the royal palace. The use of asbestos in the new ‘palast’, forced it to be closed to the public. Following German Reunification in 1990 the government ordered the building to be dismantled. What to do with the deeply historical space has been the focus of much attention, debate and controversy ever since – even after decisions have been taken.

A final decision was reached in 2007, when the government declared the Stadschloss should be reconstructed. The baroque façade would be reproduced, but with a modern interior. Work on the project has been hampered by financial debates and difficulties. The new ‘palace’ is to be called the Humboldtforum, and is to be a cultural centre. Archaeological excavations on the building site are revealing some of the earliest foundations of buildings erected on the island. To learn about this vast and expensive project, visit the Humbolt Box on the Schloßplatz. 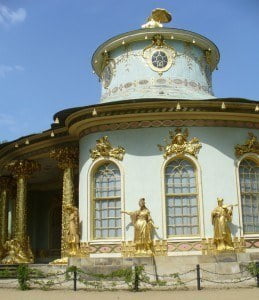 The Chinese House in Sanssouci Park.

Need a break from the cultural overload that is Berlin? Well, many peaceful lakes (Kladow and Wandlitzsee) and quaint villages (Frankfurt an der Oder and Brandenburg an der Havel) are just a train ride away, anything from 15 minutes to an hour, that allow you to just sit back and relax. But, if you need a historical fix then there are two choices. An important memorial north west of Berlin and about 50 minutes by Metro is the Sachsenhausen Concentration Camp. The camp was liberated by Soviet soldiers in 1945 and served as a prison until 1950. Much of the camp is still standing, including the prison cells and gas chambers.

Only 30 minutes from Berlin by train is the richly historical city of Potsdam and the extravagant Sanssouci Park and castles, that served as the summer residence for the Prussian kings. Often described as Germany’s Versailles, Sanssouci is a must for anyone interested in all aspects of neoclassical traditions. For more on Potsdam and its Neoclassical heritage, information on how to get there, and tips about different tours from Berlin, click here. 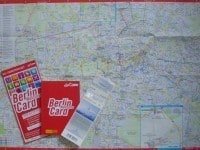 There are so many excellent museums and other must see attractions in Berlin, and it only takes visiting a few of these for your wallet or purse to start feeling a little lighter. Not surprisingly, there are a few different passes for the various museums and attractions in Berlin. Besides the convenience of having a pass, if you are looking to save money with a pass, deciding which one is good for your needs is every bits as important as knowing how to use the one you choose. For tips and advice on which card or pass to get to keep your costs down, click here.

Also, read about my Five Days of Archaeology in Berlin, which together with the information in this guide should give plenty of ideas for an interesting and enjoyable time however long you stay.