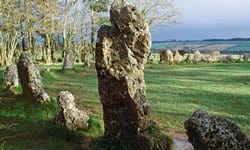 The magnificent Rollright Stones are a complex of prehistoric monuments near Long Compton village. The oldest is the Whispering Knights, a collapsed dolmen that was once part of an Early Neolithic chambered tomb. More impressive is the Kings Men, a Late Neolithic or Early Bronze Age stone circle measuring 33 metres in diameter. The solitary King Stone stands not far away. Managed by the Rollright Trust for English Heritage, the Stones also have a rich folklore and are a sacred site for modern Pagans. 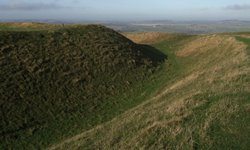 Uffington Castle is not as its name might suggest a Medieval fortification, but rather an Iron Age hill fort. Situated at the top of the summit of Whitehorse Hill, about 170 metres south west of the White Horse chalk figure, from where there are breath-taking views for miles around. At 220 metres by 160 metres in size with earthen grass covered ramparts that are up to 3 metres high, this is a rare example of a particularly large hill fort from this period, usually restricted to the more southern counties of England. Photograph © Andrew Lewis 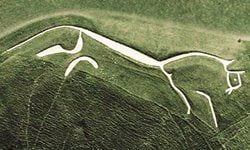 The Uffington White Horse is a geoglyph, or an area of grassland where the turf is stripped back to reveal the chalk beneath, in this case crafted into the shape of a colossal horse. At 111 metres (or 360 feet) long the horse can be seen from quite some distance. It is thought to have been first created at the end of the Late Bronze or early Iron Age, but it remains a masterpiece of prehistoric art. The horse is about 170 metres north east of an Iron Age hill fort. 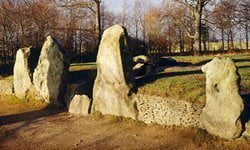 One of Britain’s most impressive chambered long barrows, Wayland’s Smithy is a tomb to house the Early Neolithic dead. It became “Wayland’s Smithy” in the Early Middle Ages, when local Anglo-Saxons named it after Wayland, a mythological blacksmith. Perched atop the Ridgeway with impressive landscape views, it is a miles’ walk from the National Trust carpark. The track between the two also takes in the Uffington White Horse and Uffington Castle. A must-see for keen walkers and prehistory fans. 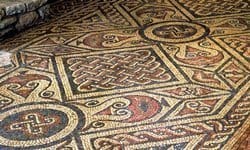 One of the largest Roman villas in Britain, North Leigh sits amid a rural idyll on the tranquil banks of the River Evenlode. Excavated multiple times during the 19th and 20th centuries, at its height in the 4th century it contained 4 bath suites, 11 rooms with under-floor ‘hypocaust’ heating, and 16 mosaic floors – the very height of Romano-British luxury! Owned by English Heritage, it is free to visit, with many ruined walls and a beautiful 3rd century mosaic floor awaiting the visitor. 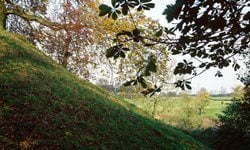 After the Norman Conquest of 1066, the victorious new elite sought to enforce their control over the rebellious English by building castles. Deddington Castle is one such example, owned by Odo of Bayeux, the half-brother of William the Conqueror and one of the most powerful of the Norman invaders. A classic motte-and-bailey fortification, Deddington had ramparts up to 15 metres high. The site fell into disrepair later in the Middle Ages and likely experienced further damage in the English Civil War. 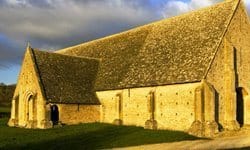 Situated in the village of Great Coxwell, this late 13th or 14th century rubble-stone barn was once part of a grange which serviced the Cistercian-run Beaulieu Abbey in Hampshire. Measuring an impressive 44 metres by 12 metres internally, it would have served as one of the largest English warehouses of its day. An important reminder of Medieval architectural skill, the building was a favourite of William Morris, the 19th century Arts and Crafts pioneer. The National Trust now own the property and request a small entry fee. 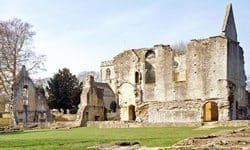 The romantic ruin of an old manor house built in the final decades of England’s Middle Ages, Minster Lovell Hall sits along the banks of the River Windrush. One of the country’s richest men, William, Baron of Lovell and Holand, commissioned it in the 1430s. After the House of York lost the Wars of the Roses, the monarchy took possession of the manor. Much of the building was demolished in the 18th century, resulting in the picturesque set-up one can see today. A Grade I listed building, Minster Lovell Hall is in the care of English Heritage and is free to visit. 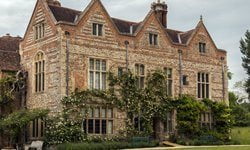 A 16th century country manor house, Greys Court today reflects the changing tastes of its many occupants over the past four centuries. The extensive grounds include a series of beautiful walled gardens, a rare Tudor-era donkey wheel, and a 14th century tower, the only extant reminder of the medieval castle that once occupied the site. Now owned by the National Trust, the house has made appearances in several British period dramas, including Downton Abbey and Midsommer Murders. 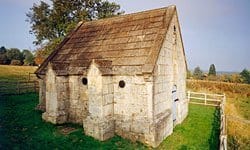 Built in the early 17th century, North Hinksey Conduit House is a rare survival of the Carfax Conduit, Oxford’s first piped water supply. After Oxford’s medieval water transportation system fell into disrepair, a London lawyer introduced the pipe as its replacement, bringing fresh water into the city from a spring near North Hinksey. The conduit house sat atop the spring and contained a 20,000-gallon lead cistern. 17th and 18th century graffiti on the limestone exterior provides a valuable insight into local social history. 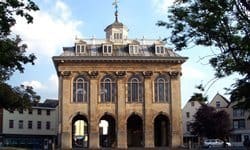 Situated within an ornate Baroque building constructed between 1678 and 1682, Abingdon County Hall Museum contains a range of permanent and temporary exhibits on local history. Built by a protégé of Christopher Wren, the building was designed as a town hall and courtroom but was converted into a museum in 1919. Its archaeological and historical collections rage from the prehistoric to the modern and include a replica of the famous Viking Age ‘Abingdon Sword’. Owned by Abingdon Town Council, entry is free. Photograph © Des Blenkinsopp [Website]