Widely thought to be the birthplace of the Renaissance, Tuscany and its capital Florence is a very popular European tourist destination. Visitors come to the area to experience evocative landscapes, as well as centuries of history and art. A number of the Medieval towns are listed UNESCO World Heritage sites, including the historic centres of Florence, Siena and San Gimignano. Tuscany is not all culture and tradition, the region has over 120 designated nature reserves. The area is also well known for its Agritourism; an initiative that started in the Italian countryside where bed and breakfast accommodation, restaurants and cooking courses are incorporated into family farms. The provinces in Tuscany are: Arezzo, Florence, Grosseto, Livorno, Lucca, Massa and Carrara, Pisa, Pistoia, Prato, and Siena. 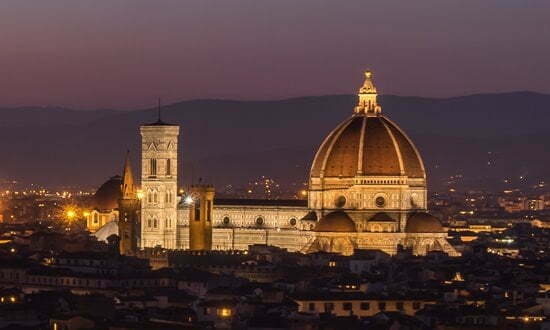 In and around the city of Cortona are a number of ancient architectural features. These include Etruscan defensive walls and a Roman aqueduct within the limits of the city itself. Surrounding Cortona are many Etruscan tombs, a network of Roman roads, and the remains of a late Republican/Imperial villa. These monuments are all located within a few kilometres of each other. Two signposted routes have been set up for visitors to explore these Etruscan and Roman sites via foot paths or by car. The ‘urban’ route covers sites in the city, while the ‘extra-urban’ route takes in sites beyond Cortona. [Website] According to archaeological evidence, the present-day town of Volterra has been occupied continuously since at least the 8th century BC. Before becoming a Roman town – that was called Volaterrae, the place was an important Etruscan centre, and before that a Neolithic settlement. After the fall of the Roman Empire, the town was a Bishop’s residence from the 5th century AD. Amongst the few remains from the Roman period of the town, the first century BC theatre is the best preserved architectural feature. The town’s Guarnacci Museum deals with the archaeology of Volterra. [Website] The Museo Archeologico Gaio Cilnio Mecenate is directly on the southern portion of a Roman amphitheatre in Arezzo. The museum occupies what was the monastery of S. Bernardo, a Olivetan convent founded in 1323. Almost certainly masonry from the amphitheatre was used in the construction of the convent, which was converted into a natural history and antiquities museum in 1823. One of the most spectacular artefacts in the museum’s collection is the Crater of Euphronios, a 6th century Attic vase made in Greece by an artist called Euphronios. [Website]

On the second floor of the Palazzo Pretorio is the Museo Archeologico Castiglion Fiorentino – a local museum that explores the area’s history from the Iron Age to the Medieval period. Pride of place is given to the archaeology of the nearby Etruscan settlement of Brolio Melmone. Recent excavations here recovered a wide range of artefacts associated with the activities of daily life, such as fishing, weaving and the making of pots. The site also yielded a fine collection of 6th century Etruscan Bronzes. [Website]

The Egyptian Museum can be found within the National Archaeological Museum of Florence has the second largest collection of Egyptian antiquities in Italy, after that of the Egyptian Museum in Turin. The history of the collection dates back to the Medici’s in the 18th century. Today some 14,000 artefacts in the museum’s collection range from the prehistoric periods of Egypt’s past to the Coptic Age. [Website]

The Etruscan Academy Museum of the City of Cortona Founded in 1727, with the establishment of the Etruscan Academy, the Museo dell’Accademia Etrusca e della Città di Cortona is now an amalgamation of two museums: the Museum of the Etruscan and Roman City of Cortona and the Museum of the Etruscan Academy. The museum, housed in the 13th century Palazzo Casali (also called the Palazzo Pretorio), is well known for its spectacular collections of Etruscan art and archaeology. There are also artefacts recovered from the nearby Ossaia Roman Villa as well as a couple of mummies and two richly decorated sarcophagi. [Website] Founded in 1761, the Guarnacci Etruscan Museum is one of the oldest public museums in Europe. The first collection of artefacts was the private collection of abbot Mario Guarnacci, who bequeathed his antiquities and library to the town of Volterra. This early collection has been substantially enhanced by purchases and further donations, making this one of the most important archaeology museums in Italy. Besides Etruscan funerary artefacts, the museum has impressive collections of Greek, Roman (Republican and Imperial) coins, bronzes, jewellery and gems. [Website]

Maremma Museum of Archaeology and Art To visit the Museo archeologico nazionale di Firenz is to visit a grand 17th century Medici palace. In fact many of the Etruscan, Greek and Roman artefacts on display originate in the Medici family’s collection of antiquities. Just one of many well known ancient objects is the bronze ‘Chimera of Arezzo’, widely thought to be one of the best examples of Etruscan art. Also worth seeing is the vast collection of Greek ceramics from Athens that were imported by the Etruscans. The museum also has an important collection of ancient Egyptian artefacts, known as the ‘Egyptian Museum’. [Website]

Displays in the Museo Archeologico Nazionale of Siena provide an excellent overview of the archaeology of both Siena and nearby Chiusi. [Website]