Visiting Akrotiri of Thera, Santorini in 2023

The Bronze Age settlement of Akrotiri was one of the most important Minoan urban centres and ports in the Aegean Sea when it was covered by volcanic ash in the 17th century BC. 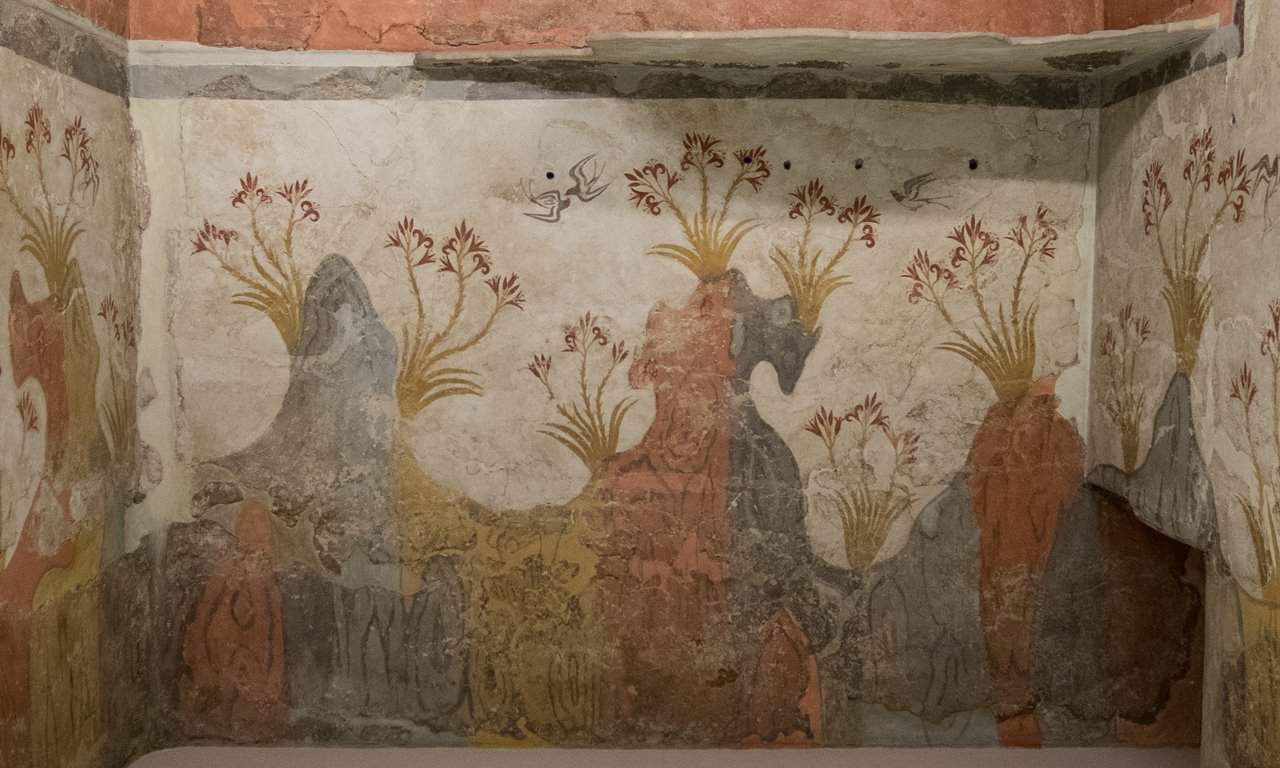 The so-called Spring Fresco depicting swallow flying above lilies and the volcanic landscape of the island, the only fresco found at the site still in situ.

The information on this page was last checked and/or updated on 20 January 2023.

Skip-the-Line entry tickets for Akrotiri can be purchased online, in advance from GetYourGuide and Tiqets. Both suppliers have a free cancellation option should you need this.

It is also possible to buy tickets via the Greek government’s ticketing website. But READ their Terms and Conditions: “Upon completion of the transaction the ticket details shall not change, unless the site cannot be visited on the indicated day due to force majeure, in which circumstance the duration of the ticket can be expanded upon notification of the User. The ticket is not refundable, cannot be cancelled and cannot be changed. The price of stolen, lost or destroyed tickets is not refunded.”

The prehistoric settlement of Akrotiri on the island of Santorini (Thíra) is one of the most important sites in the Aegean. In prehistory it was a well connected Minoan port town, with connections to mainland Greece and as far afield as Egypt and Syria. As the town was covered in ash following a volcanic eruption on the island, preservation of the settlement is exceptional, making this one of the most significant archaeological sites in Greece.

Today the site is covered by a bioclimatic roof and walkways are suspended above the archaeological remains, that allows visitors to walk among the two and three-storey buildings. 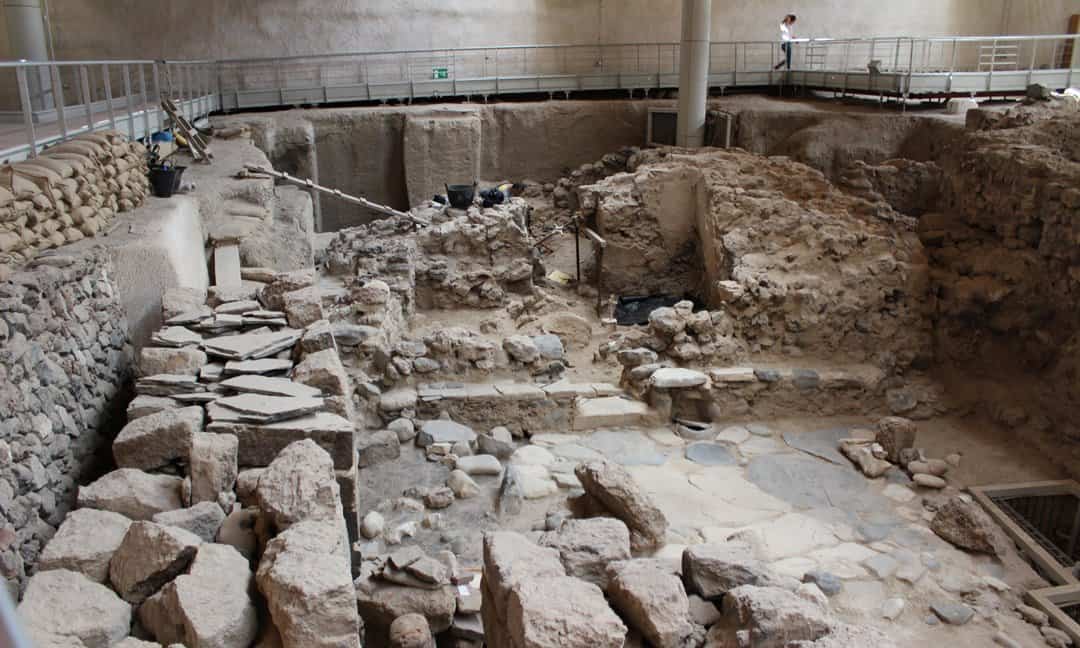 Did You Know? Akrotiri is referred to as the ‘Greek Pompeii’ because the site was covered in volcanic ash. And, like its Italian namesake, a charred bed was also recovered by archaeologists. This along with a number of frescoes and other artefacts are on display in the Akrotiri of Thera Room in the National Archaeological Museum in Athens.

Although the earliest evidence of habitation dates to the Late Neolithic times (around 6,000 years ago), it was not until the Late Bronze Age (cira 4,000 years ago) that Akrotiri had developed into one of the main urban centres and ports in the Aegean Sea. The extent of the settlement is an estimated 20 hectares; although it has not all been uncovered.

The settlement has a number of notable features: it had an elaborate drainage system, and was made up of sophisticated multi-storey buildings that were decorated with exquisite wall-paintings. The quality and quantity of the furniture and ceramic vessels are evidence of the town’s prosperity. Whereas the numerous imported objects recovered by archaeologists indicate a wide network of communication across the Mediterranean; from Crete and the Dodecanese islands to mainland Greece, from Cyprus to Egypt and Syria

Sometime towards the end of the 17th century BC the inhabitants of the town were forced to leave after a series of severe earthquakes. There followed a volcanic eruption, the ash of which completely covered the island and the town. The exact date of the eruption is debated, (for the latest research, see this article in Science Advances), but it is generally accepted that this was the largest volcanic eruption in the last 4,000 years.

The archaeological site of Akrotiri is directly south of the modern-day village with the same name, at the south-western part of the crescent shaped island of Thíra, the largest island in the Santorini archipelago.

How to Get to Akrotiri: Private or Public Transport

Akrotiri is easy to drive to if you have a rental car. But having a car for your stay is not essential. Some of the guided tours recommended on this page and detailed elsewhere do include a transfer from your hotel/holiday accommodation. Also, public transport on the island is very good.

There are regular buses from Fira (the central bus station for the island) to the car park at Akrotiri Red Beach throughout the week. Form there it is about a 250 metre walk to the archaeological site. From Fira to the Red Beach car park takes about 20 minutes, and costs around €2 for an adult.

Alternatively, hire a private minicab/taxi to take you form your accommodation to the site.

Akrotiri is named after the nearby village, the historical name is unknown.

Abandoned following earthquakes, then covered by volcanic ash between 1620 and 1530 BC.

Earliest excavations were carried out in 1867, shortly after the site was found during excavation of tephra for construction in the Suez Canal. Excavations continue today with exciting discoveries being made.

Artefacts from the site are on display in the Archaeological Museum of Thera (Fira) and the National Archaeology Museum (Athens).

Other Sites & Museums to Visit in Santorini

Exploring the Past in Santorini
Sunsets, History and Santorini with Kids
Thera Gallery – National Archaeological Museum in Athens

This map of shows the archaeological site of Akrotiri today, the extent of the site and how much has been excavated. The dotted green line shows the route of the Visitor Path through the site.

Of the frescoes in the National Archaeological Museum in Athens: The Spring Fresco was found in the Delta Complex building (the greyed infill room under the letter x on the map), while the boxers and the antelope frescoes were found in Sector Beta. 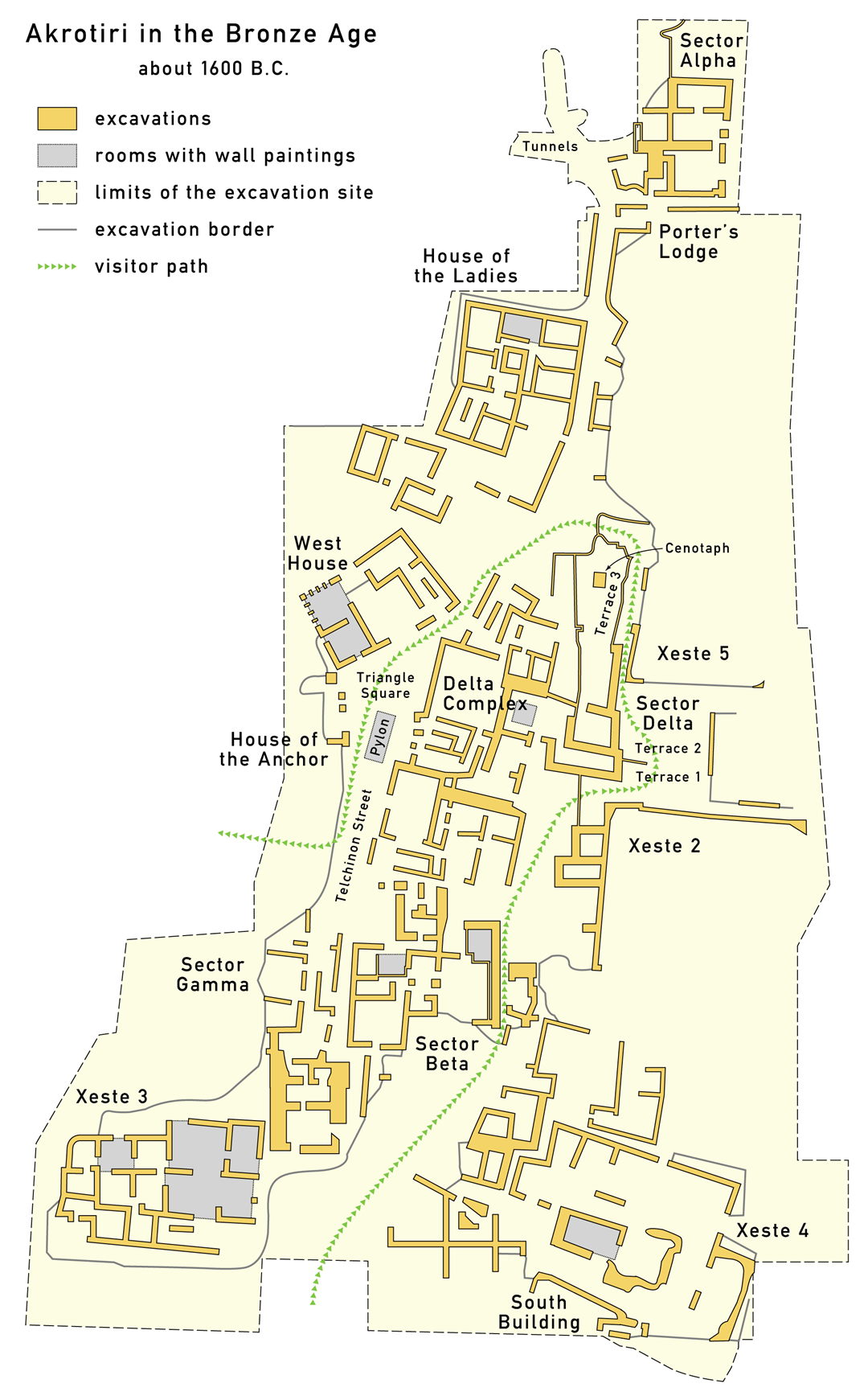 This map is a digitised compilation from a number of sources, by Maximilian Dörrbecker.