Did you know there are more ancient obelisks standing in Rome than there are in all of Egypt? And, they seem to pop up wherever you go. There are in fact 13 of them standing in prominent positions throughout the Eternal City. Some of these were made for Egyptian Pharaohs and brought to Rome by Roman Emperors, others were made for Roman Emperors. In Rome they are as striking today as they would have been in ancient Egypt and Rome. 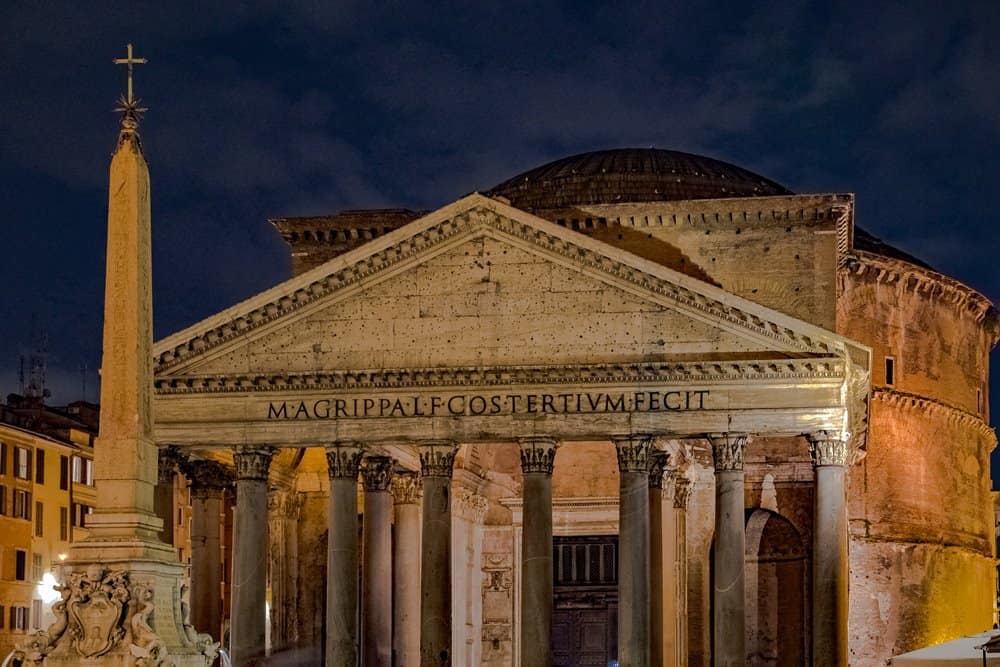 One of the most popular attractions in Rome, the Pantheon with an ancient obelisk from Heliopolis in front on the Piazza della Rotonda.

Visiting the ancient site of the Circus Maximus in Rome you see what is for all intents and purposes a modern public park with today’s Romans exercising, running and walking their dogs. There are towards the eastern end remains of what was the rounded seating built during the reign of Trajan (98 – 117 AD). But the rest is a relatively recent landscaped impression of what the circus would have looked like in ancient times. This landscaped reconstruction was created following the removal of industrial buildings in the 1930s. Today grassy banks are a stand-in for the the tiered seating that overlook a sandy track and a grassy spina. 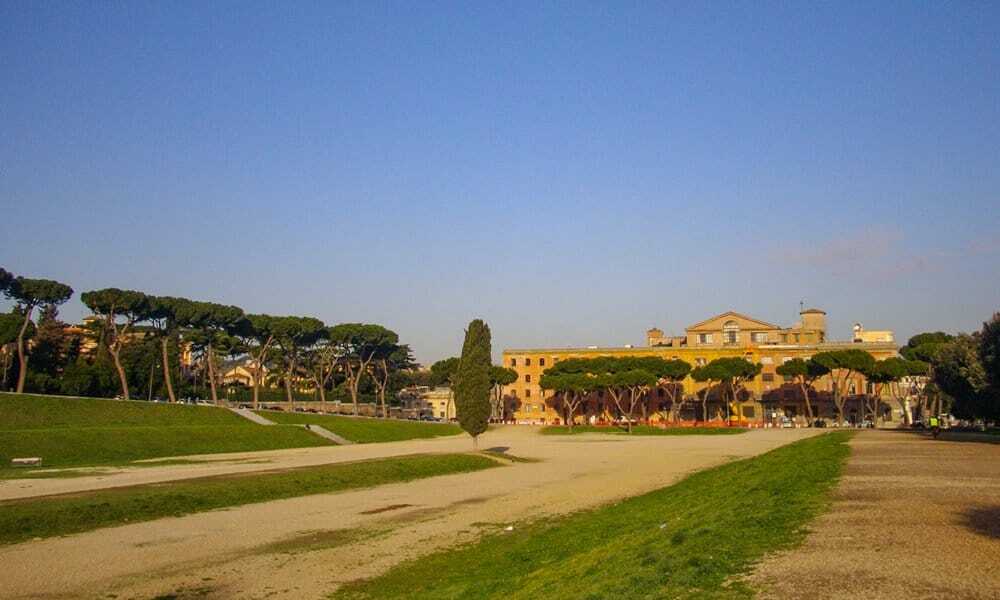 Rome’s circus maximus, or chariot-racing stadium. The earliest chariot races took place very early in the Republican era. Today it is a public park – with a lone tree standing roughly where an obelisk from Egypt once stood.

Except for a lone tree, today’s spina is bare. What remains of the original is some nine metres below ground level. We know from representations of this feature, the central area around which the racetrack would have turned, that it was ornamented. In 1587 the spina was dug up under orders from Pope Sixtus V. Two ancient Egyptian Obelisks were found, the first being what is now known of as the Lateranense Obelisk, and the second the Flaminian Obelisk. Both were then removed from the circus, repaired and erected elsewhere in Rome, the Piazza di San Giovanni in Laterano and the Piazza del Popolo respectively, where they have remained ever since. 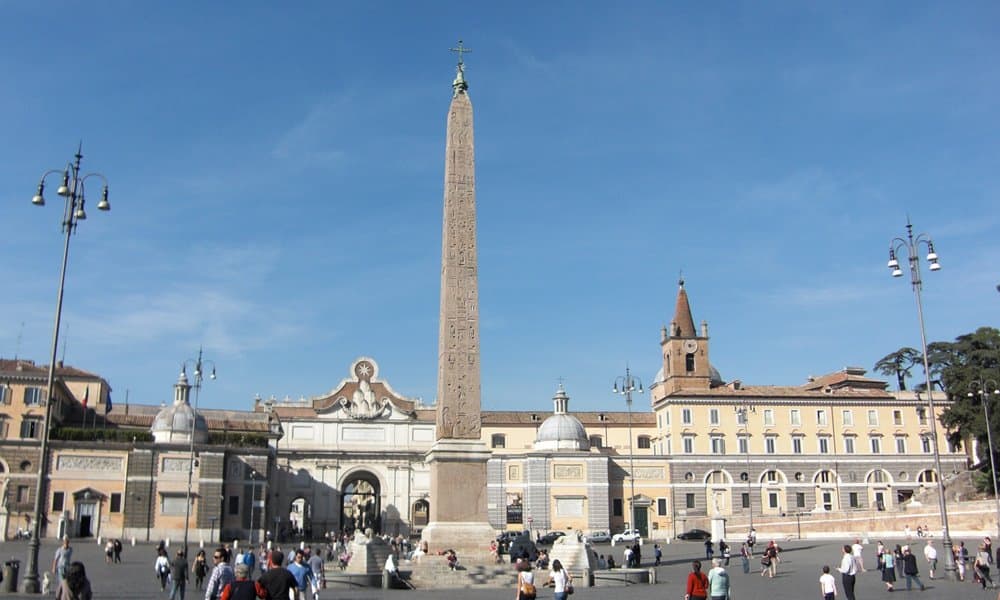 The obelisk in the centre of the Piazza del Popolo, known as the Flaminian Obelisk, was brought to Rome by Augustus to mark the anniversary of the conquest of Egypt. In Rome it was erected at the eastern end of the spina at the circus maximus. In Egypt it stood at Heliopolis having been set up by Seti I in about 1300 BCE.

There are more obelisks in Rome than anywhere else in the World, eight ancient Egyptian examples, five Roman and a number of modern ones. The largest standing Egyptian obelisk, known as the Lateranense Obelisk, is standing in Rome – in the Piazza di San Giovanni in Laterano.

Strictly speaking, an obelisk is a tall, four-sided, tapering monument that ends at the top with a pyramid. They were carved from a single piece of stone, whereas modern ones tend to be made from several stones and are often hollow. Although the oldest known obelisk is Egyptian, the word itself is of Greek origin, as it was the Greek traveller Herodotus who first described them. 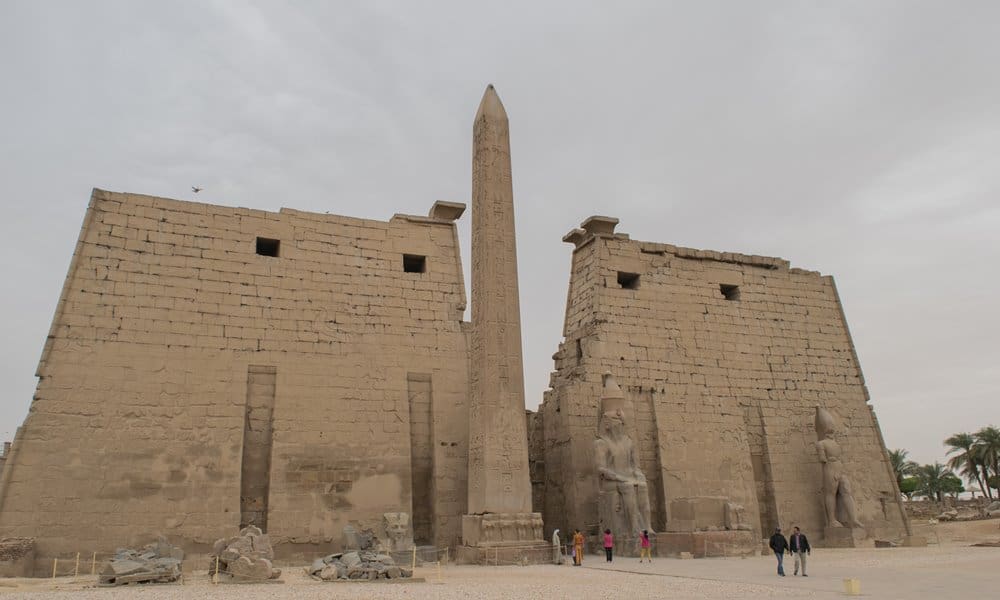 Once a pair of obelisks stood at the entrance to the Luxor Temple in Egypt. Today only one remains, the other is on the Place de la Concorde in Paris.

The ancient Egyptians made a number of obelisks, mostly they were placed in pairs at the entrances to temples. But more than half of those surviving are now scattered all over the world. The Temple of Luxor in Luxor, Egypt, has one remaining obelisk in front of its pylon.

The other of this pair, the so-called Luxor Obelisk, is now a well known attraction on the Place de la Concorde in Paris. The two obelisks were offered to France as a gift in 1829, but only one made the journey to Paris where it was erected on 25 October 1836. The other remained in Luxor and the gift was officially renounced in the 1990s by France’s President François Mitterrand.

The first obelisk to be taken from Egypt, the Flaminian Obelisk, was in fact one that ended up on the Circus Maximus. Following Augustus’s defeat of Cleopatra and Mark Anthony he took from a temple in Heliopolis a granite obelisk created in about 1280 BC under Ramses II. Augustus had it erected on the spina towards the eastern end of the circus.

During battles between the Byzantines and the Goths for the control of Rome in the sixth century, the obelisk fell amongst the rubble and remained buried until 1587, when it was excavated, repaired and moved to its present location in the Piazza del Popolo.

The only obelisk to have remained standing since Roman times is the Vatican Obelisk on St Peter’s Square in the Vatican. 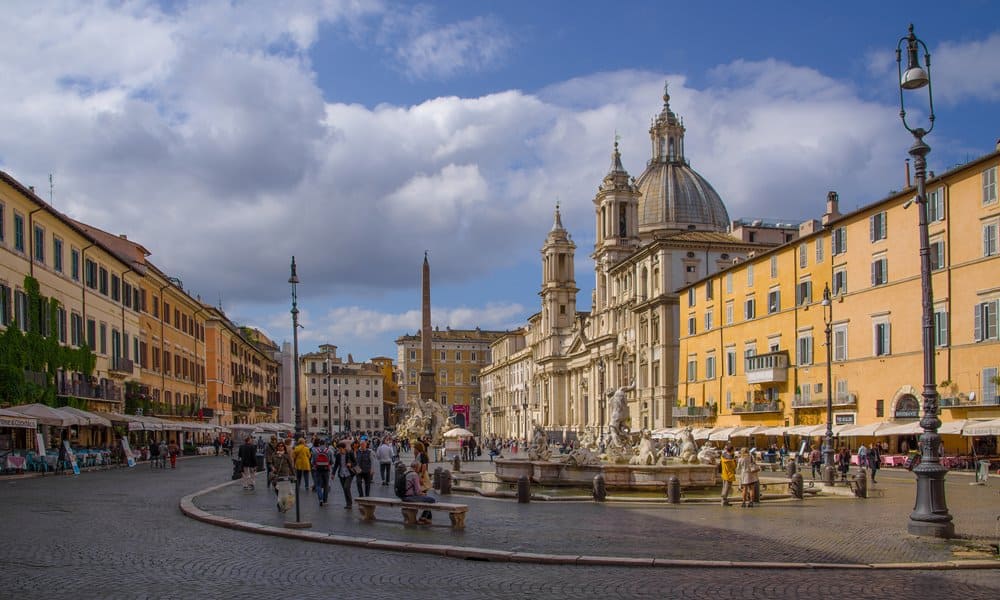 In front of the beautiful Baroque church of Sant’Agnese in Agone stands the Navona Obelisk. Although it is made of granite from Egypt, the hieroglyphs were in fact added by Roman stonecutters – and offer a hymn to Emperor Domitian.

Of the Egyptian obelisks in Rome, my favourite has to be the Minerveo Obelisk just behind the Pantheon on the Piazza della Minerva. Not only is the Egyptian object itself of interest, but it is also the obelisk’s story in Rome that adds to its character. The Minerveo was one of two obelisks brought from the small ancient Egyptian town of Sais by Emperor Diocletian to be placed in the Temple of Isis.

Much later when the foundations of the temple were discovered they were misidentified as being those of a temple dedicated to the Greek god Minerva. For this reason the basilica was named the Basilica of Saint Mary Above Minerva. And so when in 1655 the obelisk was found in the same temple it was understandably given the Greek god’s name. Perhaps it is not that unusual that the temple was thought to have a Greek connection not an Egyptian one.

Pope Alexander VII then commissioned the famous marble sculptor Bernini to create the pedestal and the Minerveo Obelisk was erected in the piazza in 1667. 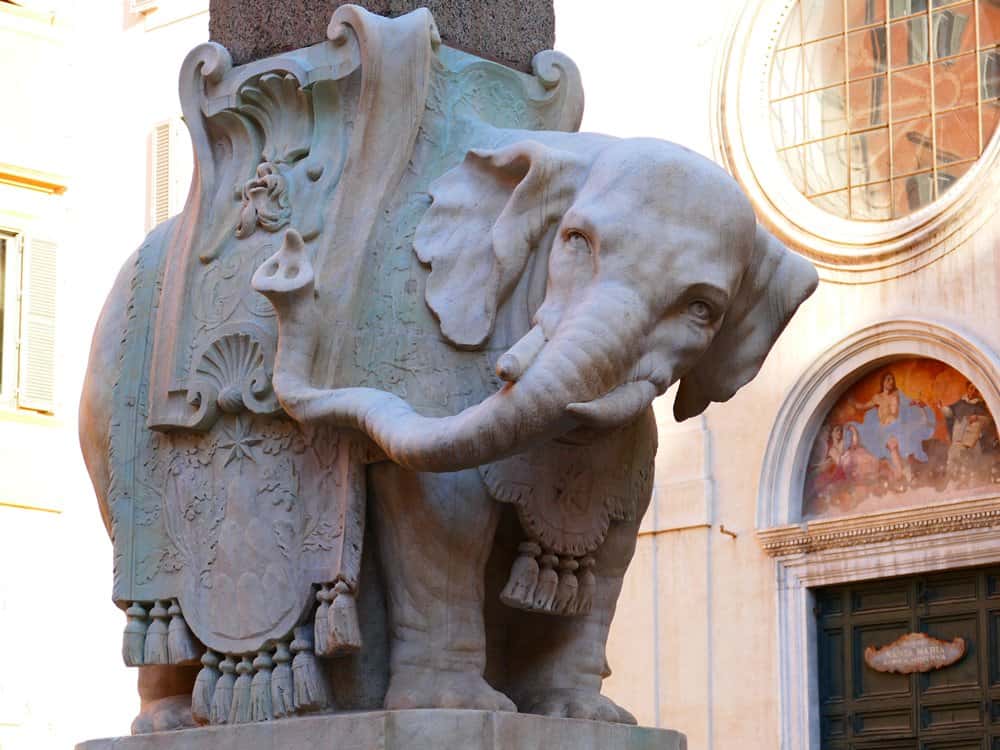 The Minerveo Obelisk in the Piazza della Minerva, the elephant, sculpted by the Italian artist Gian Lorenzo Bernini is the obelisk’s pedestal giving the impression the animal is carrying the object. You can see the base of the red granite obelisk on the elephant’s back.

Every now and then there are murmurings that these obelisks should be returned to their native lands. And indeed some are repatriated. The 1,700 year old Obelisk of Axum from Ethiopia, for example, stood on the Piazza di Porta Capena in Rome from 1937 until April 2005 when it was returned to Ethiopia.

The rights and wrongs of whether the Egyptian obelisks should remain in cities around the world aside, they are where they are today as a result of complex and interesting social and political relations, and are as much a part of the heritage of those cities as any other archaeological site. In a very physical way the obelisks are a testimony to these relations, and visiting Rome today one can not fully understand the many Roman monuments without appreciating that they were possible as a result of a vast Empire, that included Egypt. 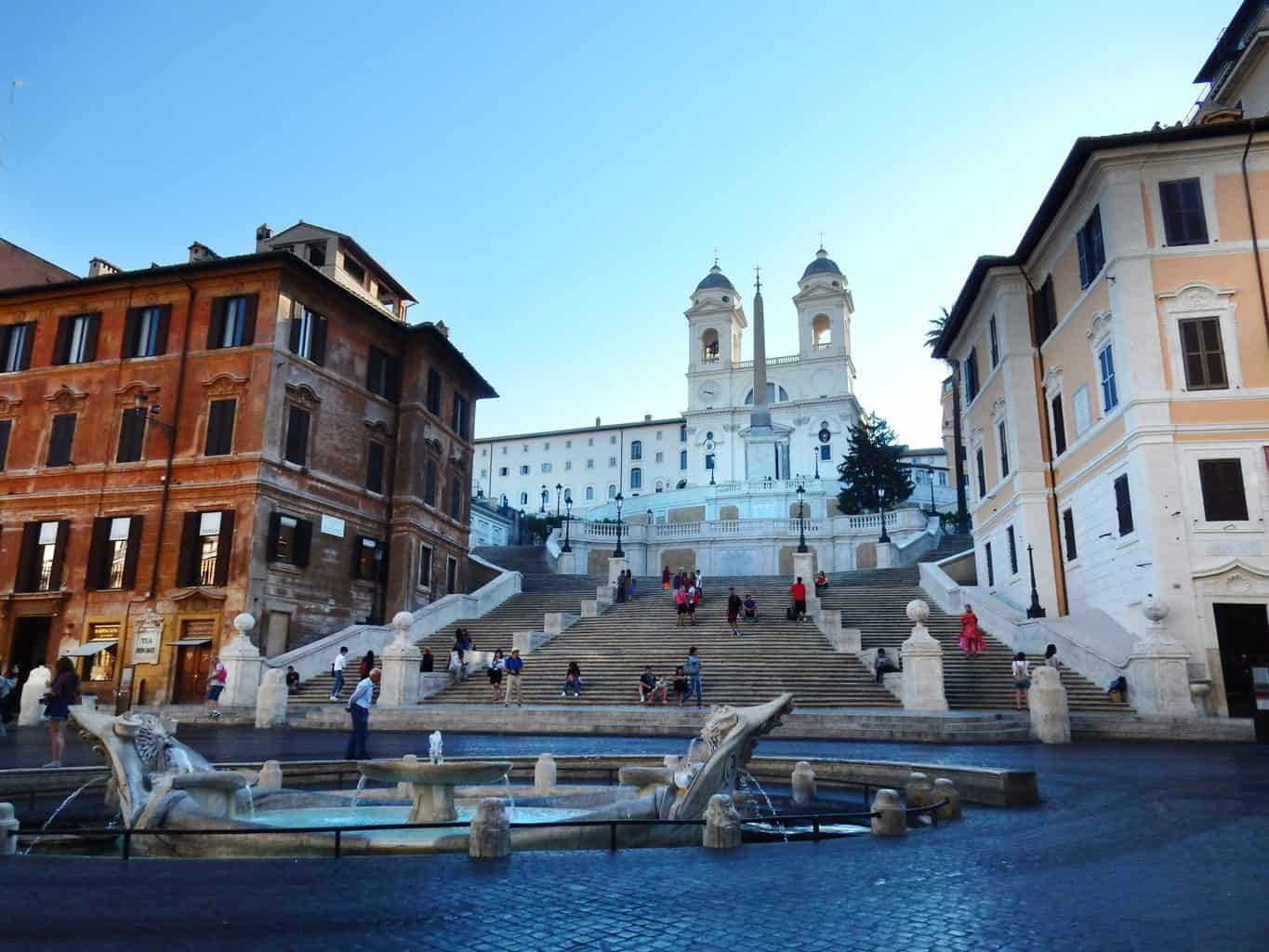 The Sallustiano Obelisk at the top of the very popular Spanish Steps is a 3rd century Roman copy of the the Flaminian Obelisk on the Piazza del Popolo.

A must read for anyone who is interested in the history of the Egyptian Obelisks found in cities around the world is Susan Sorek’s fascinating The Emperors’ Needles: Egyptian Obelisks and Rome, available on both Amazon.com and Amazon.co.uk

Read my review of The Emperors’ Needles.

Selected Walking Tours of Rome that Include the Egyptian Obelisks

Take a four hour guided tour of Rome and her Obelisks, besides seeing Egyptian obelisks and the Roman copies, you will also learn about how the city was transformed from a medieval town to a Baroque city in the 16th century. Further Details and Book Online >>

Or get up before the crowds and take a two and a half hour walking tour that takes in some of the best piazzas and fountains – you can be sure there will be lots of obelisks as well. Further Details and Book Online >>