Devon has a rich record of its prehistoric past, and many local museums have interesting displays of artefacts from the Palaeolithic and the Neolithic to the Bronze and Iron Ages. The Royal Albert Memorial Museum in Exeter is a world class institution with extraordinary collections from all around the globe, as well as Exeter and east Devon. 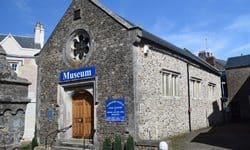 Housed in the town’s oldest building, Honiton’s museum opened to the public in November 1946. A fascinating series of exhibits include palaeontology, archaeology and various aspects of the area’s history – with fossils, artefacts and photographs covering some 140 million years. The museum has one of the most extensive collections of Honiton lace, for which the town is well-known, with some pieces dating back to the 16th century. During the summer lace-making demonstrations are popular with visitors to the area. [Website] 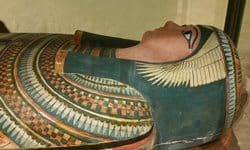 Located in the city of Exeter, this Gothic revival building is home to an award winning museum that was founded in 1868. In the museum’s collections are over one million objects and artefacts, that fall into four broad themes, namely art, antiquities, world cultures and natural history. Archaeological displays cover a range of exquisite artefacts from around the Mediterranean, including Cyprus and ancient Egypt, as well as an extensive series of displays of local history from the earliest Stone Age to the recent past. [Website] 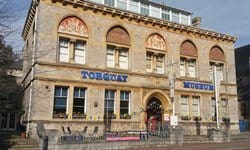 Founded in 1845, the Torquay Museum is Devon’s oldest established museum. The museum is owned and run by the Torquay Museum Society, and has been housed in the current, purpose-built building since 1876. Following major structural refurbishment, this museum is now ranked as one of the finest in the south-west of England. For a regional museum of this size it has an important and diverse collection of over 300,000 objects that relate to the prehistory and history of the Torbay area. [Website]

The only local museum in Dartmoor National Park, the Ashburton Museum delves into the important role that this town played in the wool and tin trades. The museum also houses the Paul Endacott North American Indian Collection, one of the few opportunities to get up close to such material in southwest England. Visitors can easily combine a visit to this quaint museum with a trek across the awe-inspiring Dartmoor landscape. [No Website]

Focusing on the villages and surrounding countryside of the Lower Axe Valley, this museum brings together a range of different artefacts to help visitors better appreciate local heritage. On display are a variety of old photographs depicting the area in times gone by, many belonging to the E.S. Gosling collection, as well as a selection of 19th century costumes. Romanists will also be interested in material recovered from the villa at Honeyditches. [No Website]

Housed in the town’s Grade II-listed 19th century courthouse and police station, the Axminster Heritage Centre explores the rich heritage of this market town. Displays include archaeological finds pertaining to prehistoric activity in the area and to its role as a stop along the Roman Fosse Way. The museum also showcases material pertaining to Axminster’s involvement in carpet production, an industry present in the town since at least the 18th century. [Website]

The Bampton Heritage and Visitor Centre takes up one end of St Michael and All Angels Church, a magnificent medieval parish church. It includes a range of displays on this small town in northeast Devon, including a selection of photographs from past decades. The centre also boasts a model of the old Bampton railway station, which dates from the 19th century, and a range of activities for children to take part in. [Website]

Named after one of the most important figures in British cinema history, the Bill Douglas Cinema Museum delves into the heritage of the moving picture. Located on a campus of the University of Exeter, it opened to the public in the 1990s. With over 75,000 artefacts in its collection, the museum remains an important place for academic researchers as well as showcasing a range of artefacts that no film-buff should miss. [Website]

Although only open by appointment, Bishopsteignton Heritage should be of interested to anyone looking to delve deeper into the history of this South Devon village. The heritage centre has assembled together a collection of photographs and other artefacts pertaining to the people who have lived here over the centuries, as well as the various buildings in which they lived, laboured, and shopped. Much of this material is hosted on an online archive. [Website]

Displays in the Bovey Tracey Heritage Centre explores the development of this town, which is often known as the ‘Gateway’ to Dartmoor. Exhibits cover the town’s medieval origins right through to recent periods. A key focus of the museum is on the local railway – not only does the centre occupy an old railway station but a restored GWR brake van is among the exhibits on display. A children’s area helps to keep younger visitors entertained. [Website]

Occupying an old bakehouse and two adjacent cottages, the Braunton and District Museum delves into the heritage of this area of North Devon. The area has strong links with the British military, which trains on local sand dunes, and the museum gives particular attention to the events of the Second World War. Other exhibits explore the area’s maritime heritage and the history of the local railway – including a miniature model railway. [No Website]

Based in the Old Town Hall, the Brixham Heritage Museum explores the heritage of this pretty coastal town. One of the larger local museums in the county, it delves into the important role of fishing for Brixham’s residents through the centuries, illustrating this with a range of photographs and artefacts. Archaeological explorers will also be interested in the exhibit on the Brixham Bone Cave and the evidence for Palaeolithic life it produced. [Website]

Not far from the beach, the Combe Martin Museum brings together a range of exhibits spread across three floors. These cover various facets of Combe Martin’s past, incorporating both its natural history and the story of its human habitation. Various artefacts pertaining to life in this coastal community are displayed. The museum incorporates a range of activities to keep children entertained and among its events are ‘Seaside Safaris’ run during the summer months. [Website]

Housed in the Old Town Hall, the Crediton Area Museum delves into the history of this Mid Devon town. As well as a range of artefacts recovered during local archaeological excavations, it hosts an archive of documents and photographs useful for anyone seeking to research the area’s development. Run by the Crediton Area History and Museum Society, the museum also maintains a programme of talks on local heritage. [Website]

Out on the bleak if breath-taking moors, Dartmoor Prison has housed inmates since the early 19th century, when it was initially used for French and American prisoners of war. Visitors can learn more about this fascinating place at the adjacent Dartmoor Prison Museum, which includes many original artefacts once used within the prison walls. These tell the story of both the inmates and the warders as well as detailing prominent events in the prison’s history. [Website]

Housed in a beautiful 17th century merchant’s house reputedly visited by King Charles II, Dartmouth Museum explores the heritage of this eponymous coastal town. Many of the displays delve into the important role of maritime industries and lifestyles for the people of Dartmouth, while others examine the town’s role in various military conflicts. The museum boasts a rich collection of artefacts – of particular note are an array of intricately built model ships. [Website]

Interactive Map of Archaeology and History Sites and Museums in Devon

Use the interactive map to find the museums in Devon that are listed above. You can also search for other sites and landmarks of historical interest in Devon, as well as the rest of England. As of 31 July 2020, we have pin-pointed over 165 sites, museums and historical landmarks in Devon. You can search in different ways when planning your trip to Devon. Add the map to your mobile device’s home-screen and then use your current location in Devon to find places to visit there and then, or to see how close you are to other nearby attractions. Go to the interactive map >>