Exploring the past in Portugal

Portugal the name derives from what the Romans called their early major city, Portus Cale – a port to the north near what is modern day Porto. But the area, like the rest of the Iberian Peninsula, has been inhabited by humans and our immediate ancestors for at least a million years. By far the most spectacular Stone Age archaeology of Portugal are the Ice Age engravings located in the Côa Valley to the north of the country. Later prehistoric periods are well represented here, with some impressive megalithic structures not seen elsewhere in Europe. 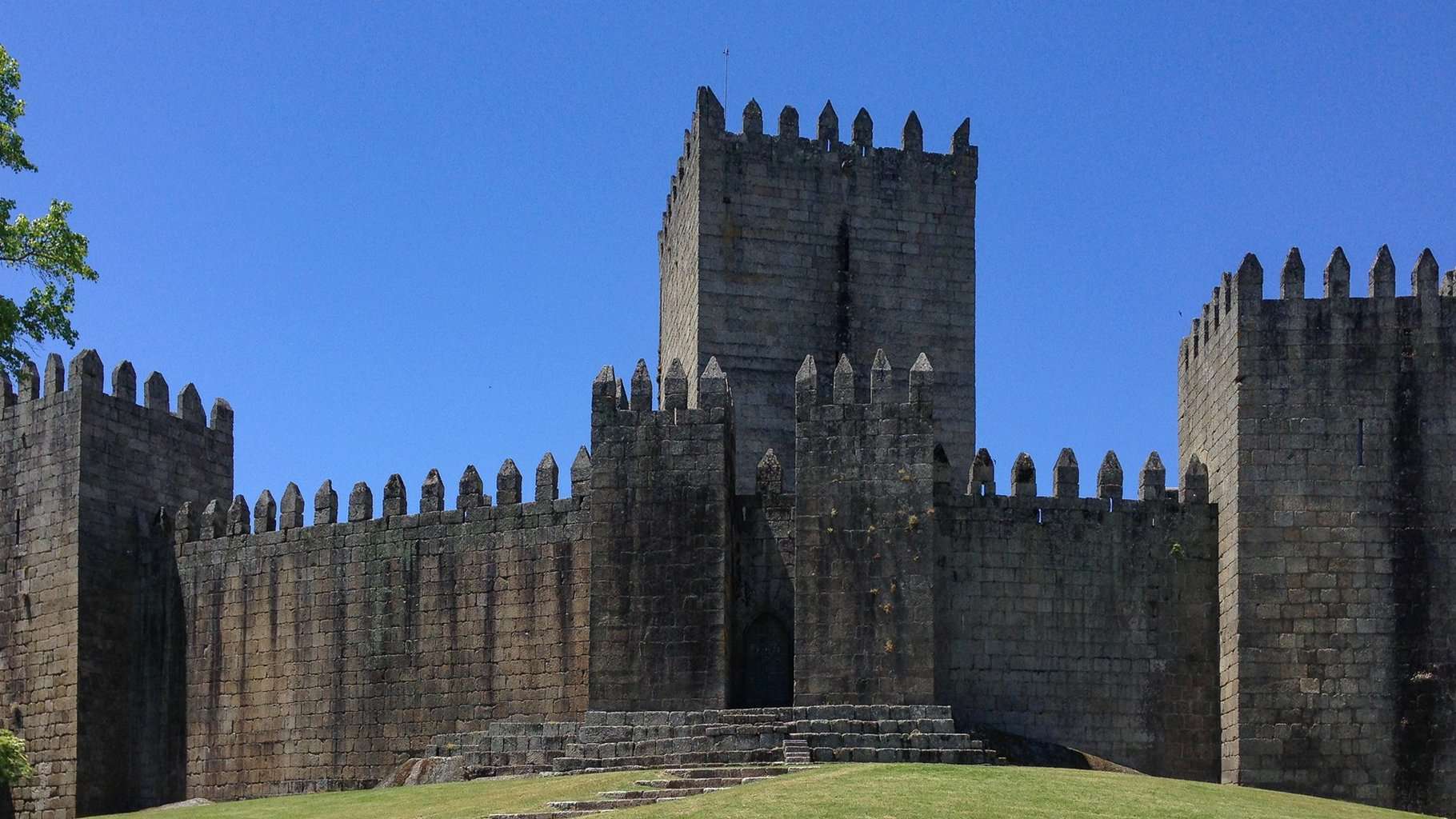 As elsewhere in Europe, castles are the quintessential symbol of Medieval Portugal, they had and still have a deep impact on the psyche of everyone that comes across their imposing figure. These warriors of stone shaped the country’s landscape and helped in defending its territory since the establishment of the Portuguese Kingdom and throughout the Middle Ages.
Guide to Castles in Portugal: From Islamic Fortifications to 19th Century Palaces >> 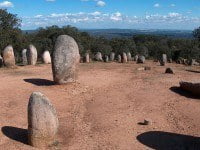 This megalithic complex is the largest surviving group of standing menhirs on the Iberian peninsula, and one of the largest in all of Europe. The earliest structure is thought to date to about 6000 BC, and the most recent about 4000 BC, spanning therefore the Neolithic and Chalcolithic periods. The circular arrangements of standing stones are near village of Guadalupe, on the road from Évora to Montemor-o-Novo. A trail, the ‘Megalithic Route’ takes in these structures and leads to and from many of the other megalithic sites in the area. 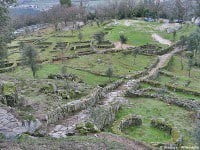 On top of a small hill with spectacular views over the Ave River valley is a large stone-walled settlement that was built some 2,000 years ago by Iron Age peoples of the northern Iberian peninsular. The hill-top town is surrounded by three dry-stone walls up to three metres thick. Within the defensive ramparts paved roads roughly laid out in a grid pattern divide up blocks of stone walled structures that probably formed the focus of individual family units. One of the most important prehistoric sites in Portugal. 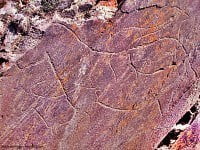 During the construction of a dam on the Côa River at the end of the 1980s rocks with engraved images were discovered. Although the imagery was typical of Palaeolithic cave art, it took some time before a Stone Age date for these depictions was accepted. A new government elected in 1995 ended the dam construction and an archaeological park was established in 1996. Today there are over 70 known locations with some 1000 engraved rocks, with imagery dating to the Upper Palaeolithic, Iron Age and historic periods. [Website] 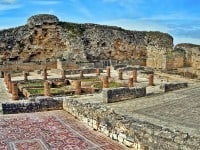 By the time the Romans arrived in what is now Portugal, they found a flourishing town. Under the Romans, from the first half of the second century BC, Conimbriga developed into a town with a population of over 10,000 people. Although not have been the biggest Roman settlement in Portugal, it is by far the best preserved. A number of features can be see in situ, including mosaic floors, and a substantial on site museum displays a large collection of excavated artefacts. Photograph © Wikipedia [Website] 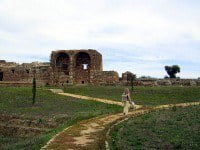 The archaeological site of São Cucufate (Saint Cucuphas) is a complex of ruins of a Medieval monastic community that was built on top of what was a Roman villa. A typical rural villa with a bathhouse and peristyle was constructed in the 1st century AD. By the 4th or 5th century AD the villa was abandoned and by the 9th century a religious community established itself amongst the Roman ruins, which lasted until the 13th century, and dedicated itself to the martyred Spanish saint Cucuphas. Photograph © Nemracc – Wikipedia

As one of the finest Portuguese cities, Évora is rightly a UNESCO World Heritage Site. Much of the remarkable architectural heritage dates to the 15th century, but as a prominent Roman town, then called Liberalitas Julia, the ruins of a temple is one of the most significant Roman landmarks in Portugal today. The temple was built sometime during the first century AD on what was the ancient acropolis, which is today the central square. Other Roman remains in Évora include the town walls and the baths. Photograph © Wikipedia [UNESCO Website] 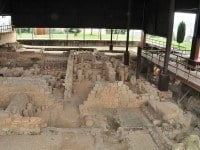 On one of the higher points within the city of Braga are the extensive archaeological remains of a large, civic complex, the oldest sections of which date back to the 1st century BC. Although only partially excavated, the complex is thought to have included the public baths and theatre for the Roman civitas of Bracara Augusta then the capital of the Roman province of Gallaecia. Parts of the public baths have been covered with a protective roof, with raised walkways for visitors. Photograph © Joseolgon – Wikipedia 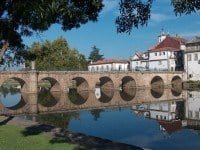 Built towards the end of the 1st century AD and the beginning of the 2nd century AD, the bridge crossing the Tâmega River in the town of Chaves in far northern Portugal is named after the Roman Emperor Trajan, so known locally as Ponte de Trajano. Still in very good shape, the bridge is 140 metres long and has 12 arches. Despite being restored over the years, two of the columns are original and have inscriptions detailing honours bestowed on locals by the Emperor. Photograph © João Carvalho – Wikipedia 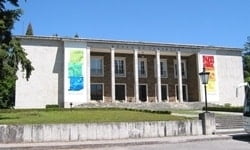 An extraordinary collection of objects from ancient Egypt to Picasso, as well as an automobile collection of over 100 cars and motorcycles. The Museu do Caramulo has in its diverse and eclectic art collections more than 500 objects: Egyptian and Roman antiquities, Japanese art, paintings, sculpture, furniture, European ceramics and Portuguese tapestries. The collection of cars includes the oldest functioning automobile in Portugal. [Website] 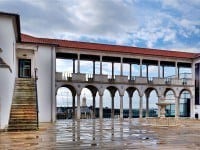 One of the most significant art museums in Portugal, it houses collections of religious art from various churches and other religious institutions in the Coimbra region. The building was once the Bishop’s Palace, which during the Middle Ages was built on top of the Roman Forum. Remains from the Roman period can be seen in the ground floor of the museum. These are the remnants of what was the cryptoporticus that supported a platform on which the forum was built. Photograph © Alvesgaspar [Website] 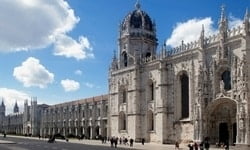 The National Museum of Archaeology in Lisbon is housed in the west wing of the Gothic Jerónimos Monastery. This is the largest and most important archaeology museum in Portugal, with artefacts from all periods of Portugal’s past, from archaeological sites throughout the country on permanent display in ‘Treasures of Portuguese Archaeology’. The museum also has an extensive collection of Egyptian antiquities, of which about 300 objects are on permanent display. [Website]

For those who like to take small group or private tours, Get Your Guide has over 950 tours and activities of all kinds, to suit all interests. There day trips from all the major cities and holiday destinations, such as Lisbon and Porto. These range from wine and culinary walks and tours to trips to castles and archaeological sites, as well as the usual range of activities such as hop-on-hop-off bus rides and segway tours. See this list of tours and activities offered throughout Portugal.