Everyone wants to see the prehistoric paintings and engravings in the caves of Font de Gaume and Les Combarelles. And with good reason. Besides the high demand, entry to these two caves is severely restricted for conservation reasons. And in these times of restrictions at public attractions globally, getting tickets for Font de Gaume and Les Combarelles will be even more difficult.

Information in this article was last checked and updated on 17 May 2021.

Because of the restrictions that apply to visiting archaeological and historical monuments throughout France, the usual procedures for buying tickets for Font de Gaume and Les Combarelles, as well as the conditions for visiting these two Ice Age caves, as outlined on this page, will be different for some time.

As always, it is a guided tour only, and now there will only be two people per tour.

Prices stay the same: €11.50 per person, per cave. The price has not been raised to take advantage of the current situation.

The cave is closed on Saturdays, as well as the following dates each year: 1 January, 1 May, 1 November and 25 December. 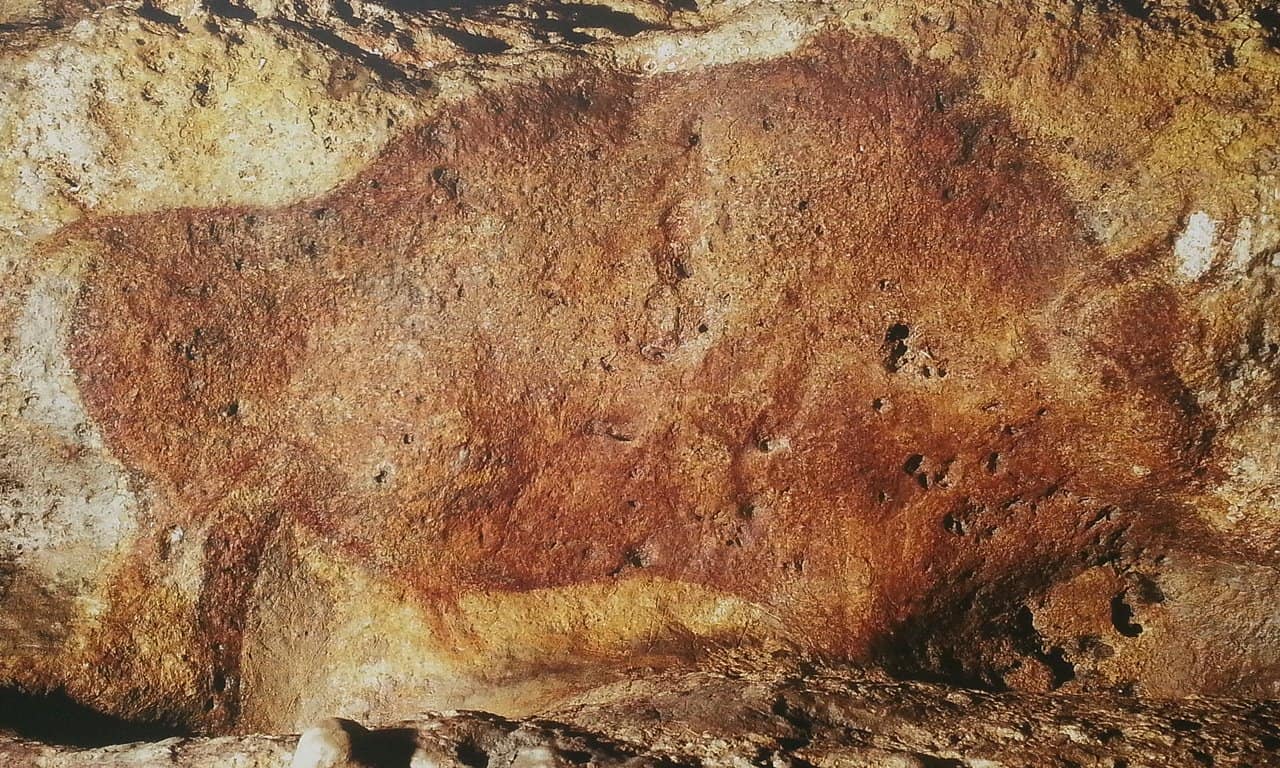 One of the painted bison for which Font de Gaume is so famous.

Getting Tickets for Font de Gaume and Les Combarelles

Unless you are part of an organised tour, the only way you can get tickets for Font de Gaume and Les Combarelles is to go to the ticket office and buy them in person on the day you wish to visit. And please note: each person wanting a ticket has to be present at the ticket office at the time of purchase. They are very strict about this, and I have seen people turned away.

Guided tours of the caves are available each day of the week except Saturday. On the following national and religious holidays, the caves are also closed: 1 January, 1 May, 1 and 11 November, 25 December
The opening hours are:

The ticket office opens at 9.30 am, throughout the year.

What time to Queue for Tickets?

The ticket office may very well open at 9.30 am, but as the demand for tickets is high queues start to form much earlier than that, particularly in high season (June, July and August – and even into September). In 2015 numbered benches were installed in front of the ticket office. So at least now there is somewhere to sit. Depending on the time of the year, bring something warm and even waterproof as the early mornings can be chilly and damp.

In the past I recommended getting to the ticket office between 6 and 7.00 am during June to August, the earlier the better if tickets to both Font de Gaume and Les Combarelles were required. I have, however, heard of people arriving at 5.30 am and still finding they were not first in the queue.

Outside the high season (April, May, September and October), 7 to 7.30 am should be fine and perhaps even later (8.30 to 9.00 am) for February, November and December. I have had stories of people arriving at 9 and still getting tickets to Font de Gaume, but on the following day arriving at 8.00 am was already too late.

I know of someone who visited at the end of January 2018 and they arrived at 9.15 am and got tickets to both.

I suppose it really depends on how desperate you want tickets, and how eager you are to visit both Les Combarelles and Font de Gaume.

As you will see in the photograph below the seats are numbered. This means you can work out when you get to the queue what your chances are of getting tickets. But do bear in mind, advance tickets are sold to tour groups. If I am not first I also ask the people ahead of me if they are getting for both or just Font de Gaume (I have yet to come across someone wanting tickets for Les Combarelles and not Font de Gaume). That way I can get an idea whether or not I will get tickets for both caves or not. Only once did I give up immediately because I knew there was no way I would get tickets for both caves. 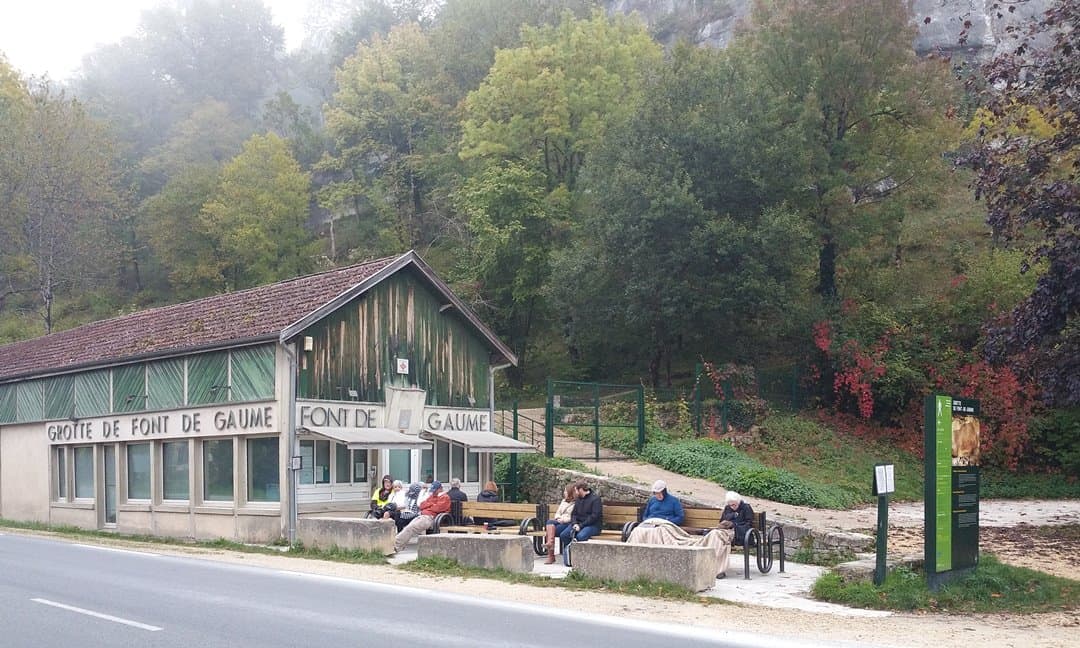 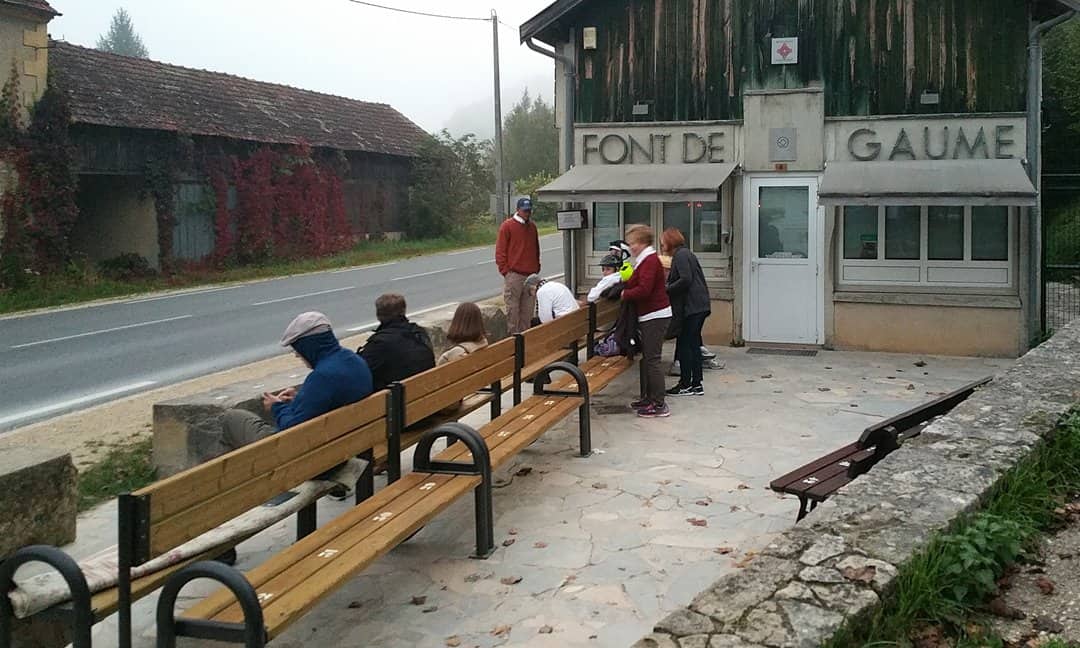 Benches in front of the ticket office, note they are numbered.

The time to get to the ticket office varies according to the tourist season. And depends on how badly you want to get into the cave on any given day. I usually conduct my cave art tours visiting Les Eyzies in May/June. At this time of the year I like to get to the ticket office around 6.30 am. Each time I have done this I have been the the second or third in the queue. This is much the same for September and October, and school holidays outside of the summer peak season. Most people then start arriving around 7 am, and then steadily thereafter. The last few weeks of July and August, the height of the tourist season, it is different – friends of mine have arrived at 6.30 am and are about 12th in the queue, but they still got the tickets they wanted.

Demand can also vary by day, within the same period. On one day in mid June 2015 people who arrived just after 9 am did not get tickets for that day, and yet on another day less than two weeks later people who arrived at 9.30 am managed to get tickets to visit the cave that day. (They were under the impression you could just arrive when the ticket office opens and get a ticket.) Something similar happened towards the end of September 2015. On Tuesday 29 September a couple arrived at 8.30 am, and by the time they got to the front of the queue all tickets were sold. They returned three days later (1 October) at 7.30 am and were lucky. But then again that was a day when a couple who arrived at 9.30 am got tickets.

Good luck! Or, bon courage as they say in France. 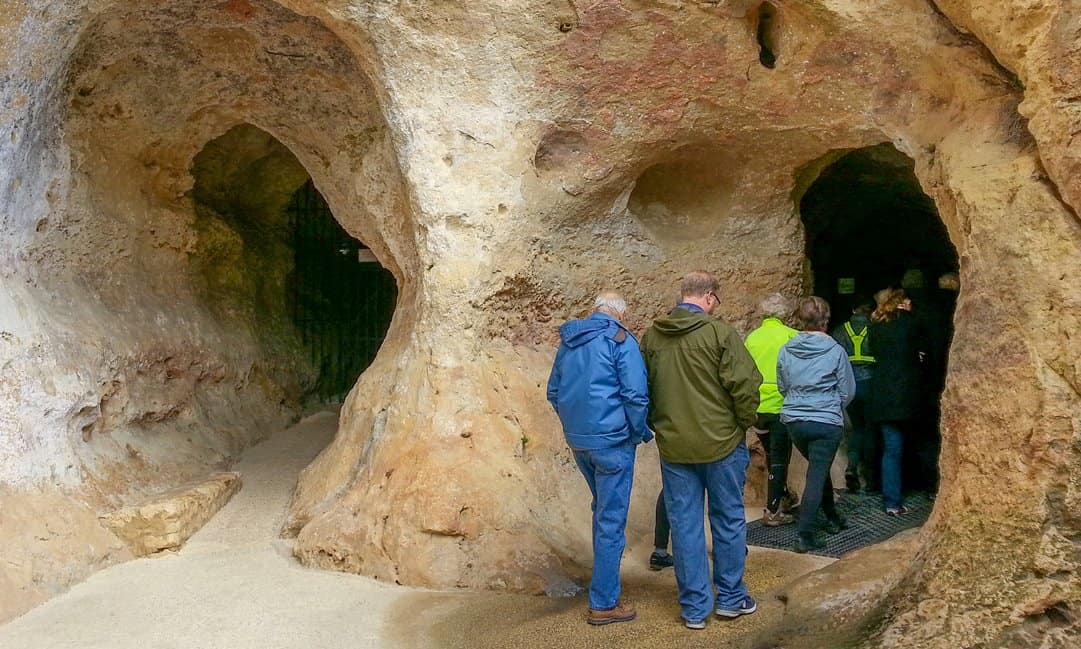 If you follow the advice above, you will be following in the footsteps of these and other people.

Can I get someone to stand in the queue for me?

Increasingly I am being asked if it is possible for tourists to get someone to stand in for them. Or, if one member of say a group of four can go at 6.00 and have the other three join just before the ticket office opens.

First, I have not heard of anyone getting stand-ins. The cynic that I am, I would be surprised if it has not happened. Certainly, I would not want to get caught doing it!

On one person in a group going early, it appears opinions are divided. When I have taken groups in the past, I have arrived at my usual time and then told my group to join me by 9.00 am. Never have I encountered a negative reaction from others. But I have seen a discussion on one well known travel review website, well known for peddling in misinformation, where the participants of the discussion all expressed outrage that someone might do this. Seriously? Why should 5 people wait in a queue from 6.00 am when one can? As long as everyone is there for the actual purchase of the tickets (as is required by the ticket office), I really do think there is nothing wrong with it. It makes ABSOLUTELY NO DIFFERENCE whether one person waits in line or five.

When ever I have queued I have always enjoyed amiable company with people from all corners of the globe and all walks of life. The Café de Mairie in Les Eyzies opens early. Before going to the ticket office I get myself a take-away hot chocolate and croissant. And often while queuing, I or others I am queuing with have nipped down to the café for a refill.

Les Eyzies is the perfect base

As we have to queue for tickets to Font de Gaume and Les Combarelles, often early in the morning, if seeing these two caves is important for your trip to the Vézère Valley then I strongly recommend a base in Les Eyzies. Besides a number of hotels in the town, there are also bed and breakfasts and self catering establishments. I tend to stay in hotels, and have stayed in all of them at least once. My favourite by far is Hotel Le Moulin de La Beune. It may only be a 2* hotel, but it has more character and charm than most of the other hotels in town. I love its setting and the excellent restaurant. And very little beats returning at the end of a hot day sightseeing in the Dordogne to a chair beside the babbling brook and an ice cold drink of choice. I do also like, and happy to recommend, Hôtel des Roches and Hostellerie du Passeur. More options can be viewed via this list of accommodation for Les Eyzies.

Besides the two caves and having to queue early in the morning, there are many other reasons why I think Les Eyzies is a great base to explore the history of the Vézère Valley and surrounding area. 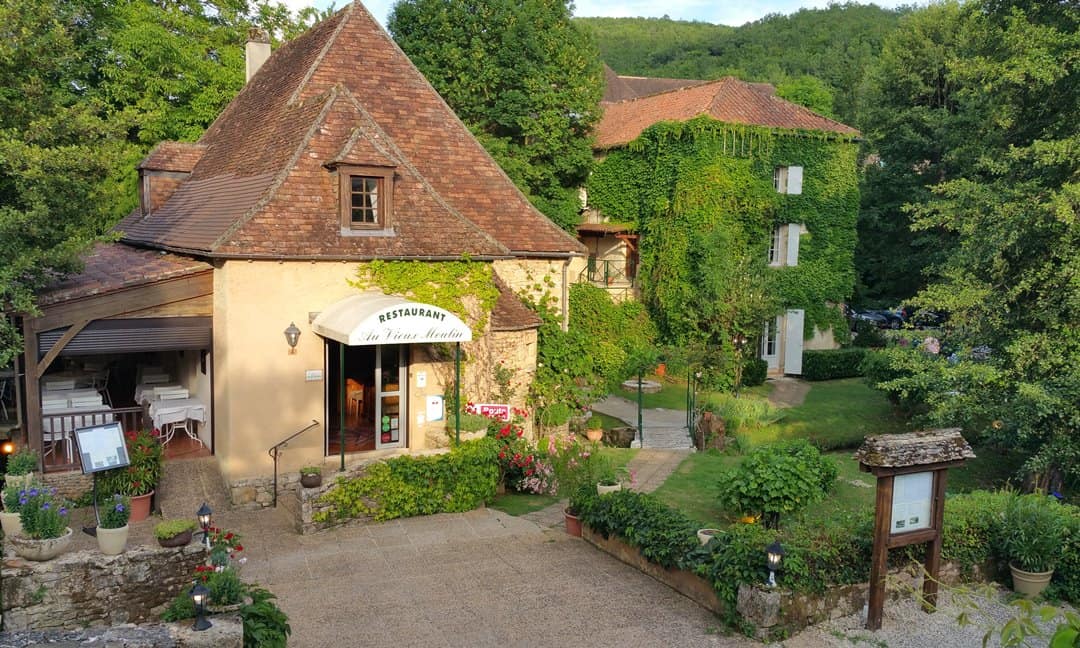 Looking from the restaurant at Hotel Le Moulin de La Beune towards the hotel.

Also on Sale at the Font de Gaume Ticket office

Each day 210 people are allowed entry to Abri du Cap Blanc. From 1 January to the end of June, and from 1 October to the end of December 105 tickets for Abri Cap Blanc can be purchased at Font de Gaume, while the other 105 tickets can be bought at the site (a few kilometres up the road – it is well signposted). NB, during July and August tickets for this decorated shelter are only available at the site itself. Tickets for Cap Blanc can not be reserved in advance. As they allow 210 people in per day, it is quite easy to get tickets – this is not a popular cave art attraction.

Visiting Les Eyzies? If you are planning a trip to Les Eyzies in the Dordogne, your may be interested in reading our check our Travel Guide to Les Eyzies: the World Capital of Prehistory.