The Moot Hall in Aldeburgh is believed to be one of the best preserved Tudor public buildings in Britain. Built around 1550, this timber framed brick building is now home to the Aldeburgh Museum, as well as still being used for local council meetings. Objects on display come from the surrounding area, and include prehistoric finds, Roman and medieval artefacts. 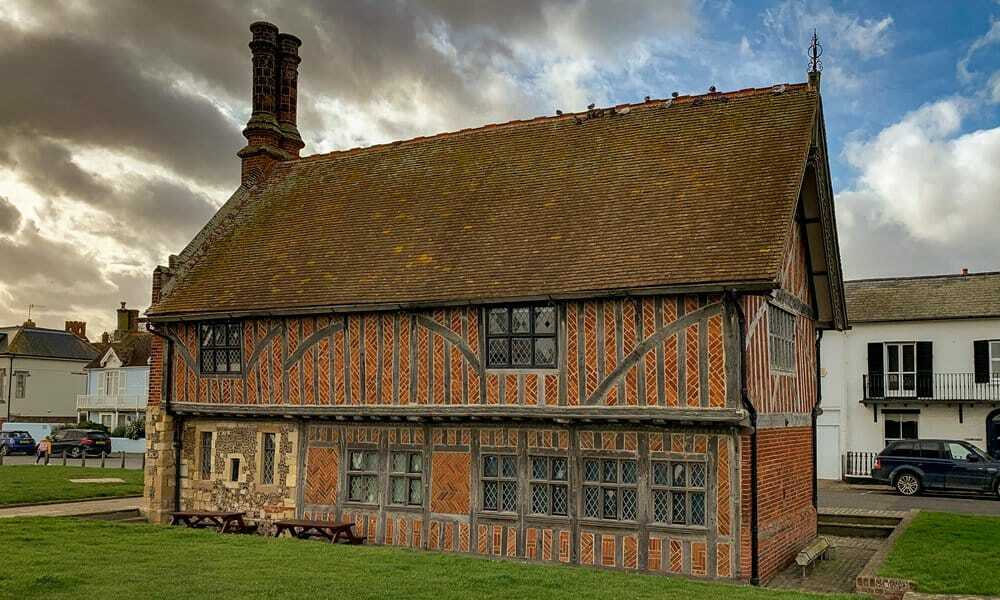 The Moot Hall, a quaint brick and timber framed Tudor building that is now home to the Aldeburgh Museum.

There is no exact date for the construction of this building, but best-guess estimates put it at 1550. Moot Hall sits on the seafront in Aldeburgh, with a huge pebble beach behind it stretching out to a cold, grey sea. It is quite remarkable to look at, with its timber frame, red bricks and tiled roof looking somewhat incongruous next to the colourful seaside villas and wooden shacks, lobster pots and fish stalls that fill the area. Now famous as a music and arts holiday destination, Moot Hall harks back to a time when Aldeburgh was a prosperous Tudor town of traders and ship builders. 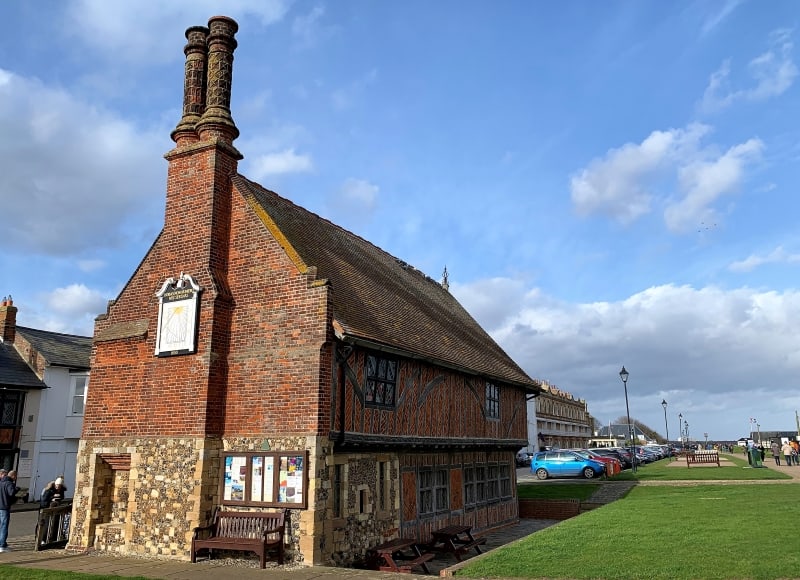 The sundial on the south side of the building was installed in 1650. This one is an exact replica and bears the Latin inscription ‘Horas non numero nisi serenas’, which means: ‘I only count the sunny hours’.

In the late 1400s, coastal erosion had led to the creation of a natural harbour, and this small settlement which only had five houses in 1086, now became an important Tudor port, whose ship builders built Francis Drake’s Golden Hind. The town was granted Borough status in 1529 and made a ‘free borough’ by Edward VI in 1547. Over time, however, the River Alde silted up, and larger ships were unable to use it. The town became somewhat diminished, surviving primarily as a fishing port then as a holiday seaside resort, with much of the Tudor town falling into the sea over the centuries. The hall, which had once been at the centre of town, now finds itself perilously close to the sea. 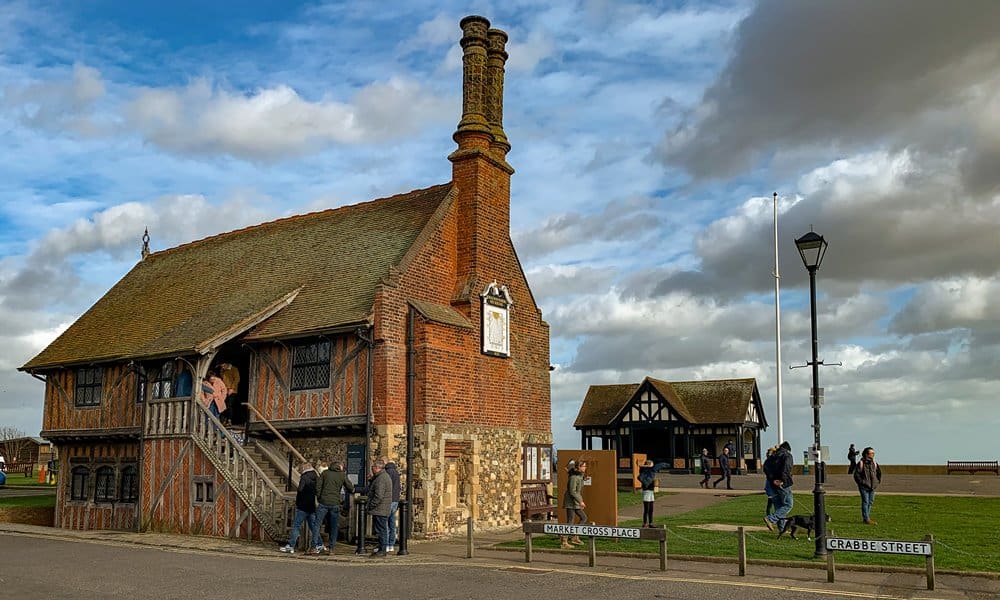 The Moot Hall, once in the centre of town, now sits on the sea front thanks to coastal erosion.

The Moot Hall is one of the few remaining Tudor buildings, although it has been altered and adapted over the years. Initially the Town Hall, as it was then known, was used for six self-contained shops, with goods sold through hatches on the ground floor as well as a two cell jail. The upper floor was used as a council meeting chamber, as it still is today. By the mid 1800s it had fallen into a state of disrepair and was renovated by the Victorians, who added the brick chimneys which are replicas of the kitchen chimneys at Hampton Court Palace. It was also the Victorians who changed its name to ‘Moot Hall’, using the Saxon word ‘moot’ for ‘meeting’. 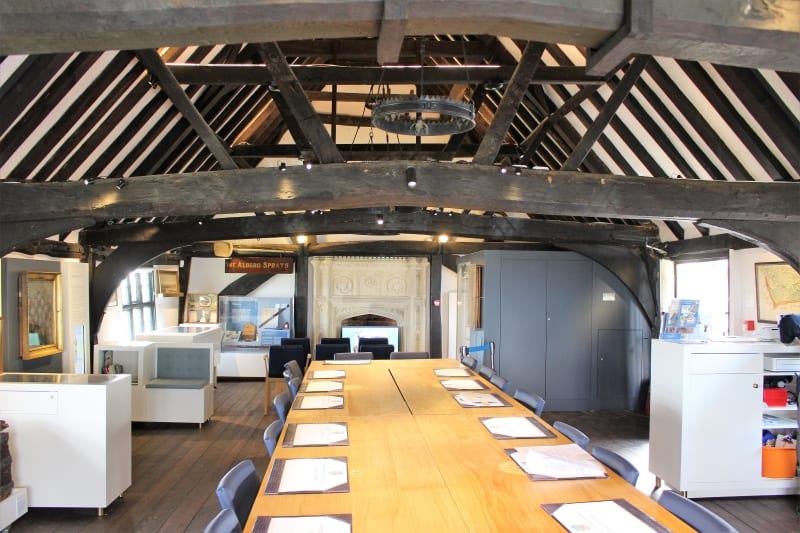 This must be an amazing place to attend council meetings; surrounded by historical artefacts and underneath the timber beams with a huge Tudor fireplace at the end of the room.

Now a museum, you enter on the upper floor into a large room which is used as the council meeting room, with display cases and artefacts around the walls. For such a small space, it packs an awful lot in, ranging from the prehistoric past, to the Romans, the infamous witch trials of the 1600s to war memorials for the two world wars.

This 14th century oak chest has three locks on it, showing that three keyholders were required to open it. It probably held parish registers and valuable items.

The mayoral chains of office are on display, an impressive piece made up of 50 medallions with the names of mayors inscribed on them – including that of Elizabeth Garret Anderson; the suffragist who was the first woman to qualify as a surgeon and physician in Britain, who was sister to the famous militant suffragist Millicent Fawcett who now has a statue in London’s Parliament Square, and who became the first female mayor in Britain, of Aldeburgh, in 1908. Mayoral ceremonial robes and the Mayor’s chair are also on display, the chair seat is believed to originally have been a ducking stool. 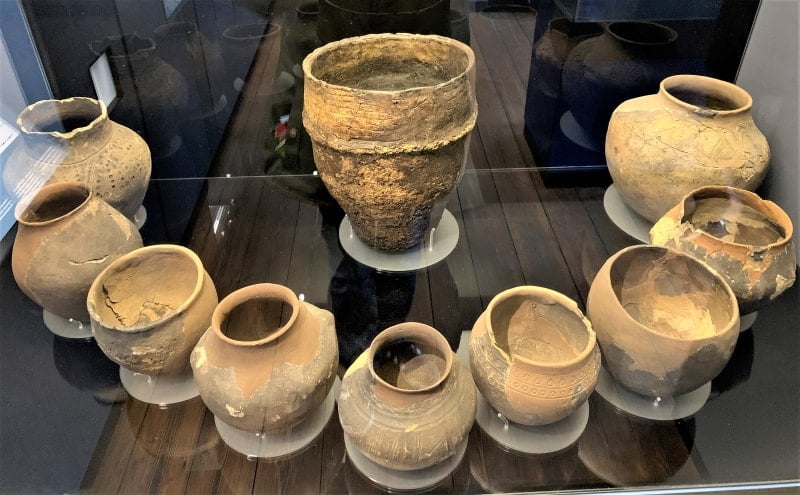 These cremation urns are all Anglo-Saxon, except for the larger one which is Bronze Age and was probably re-used by the Saxons.

The building was once used in the witch trials of 1645, when the Witchfinder General, Matthew Hopkins, was called in by the residents to purge Aldeburgh of its bad fortune. He accused seven women of witchcraft, locked them up in the Town Hall, where guards watched and waited to see ‘the coming of the unfamiliar spirits’. Cold, hungry and driven mad with a lack of sleep, they probably all eventually ‘confessed’. In February 1646, all seven women were hanged. 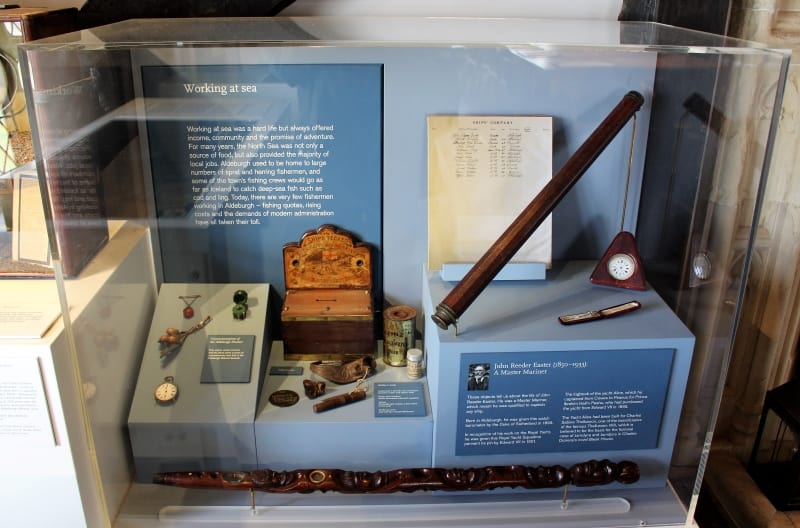 Life at sea is unsuprisingly a prominent feature of this coastal museum. Objects which commemorate the Aldeburgh Disaster, sailors tools and even a tin of Heinz mock turtle soup sit next to a barometer and ships’ logs.

Other objects relate to the Aldeburgh Disaster of 1899, one of the worst disasters in Lifeboat history. The Aldeburgh lifeboat had launched into heavy seas to help a ship which had run aground nearby. The sea and wind was so fierce that the lifeboat capsized, tossing many of the men into the sea, who struggled to reach land due to the backwash of the sea. The lifeboat eventually made it to shore, and the crew realised that seven of their own were trapped underneath it. Too heavy to lift they tried every means possible to rescue their men, but it was to no avail. A wooden display cabinet is made of wood taken from the lifeboat and contains photos of the men who died as well as a model of the lifeboat. 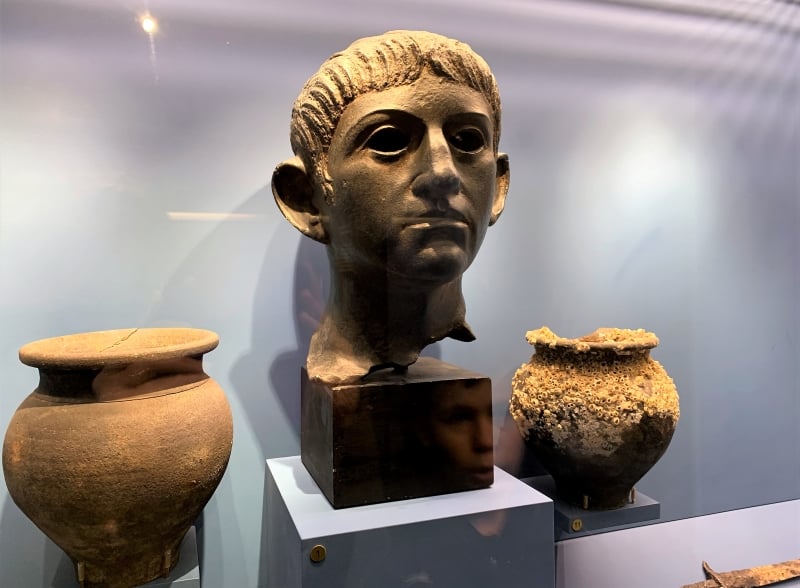 Roman finds include this copper alloy head and this barnacle encrusted urn found in the River Arne.

The museum continues downstairs with some of their earliest finds. Prehistoric axes, arrowheads and microliths all point to Stone Age human activity in the area, although a specific settlement has yet to be found. A Roman column, cooking pots, coins, a short sword and the head of Nero all provide evidence of Roman occupation of the area. Clay pipes, a bottle of Jamaican Rum and a huge light bulb from a lighthouse all show the little details from life here in later years. 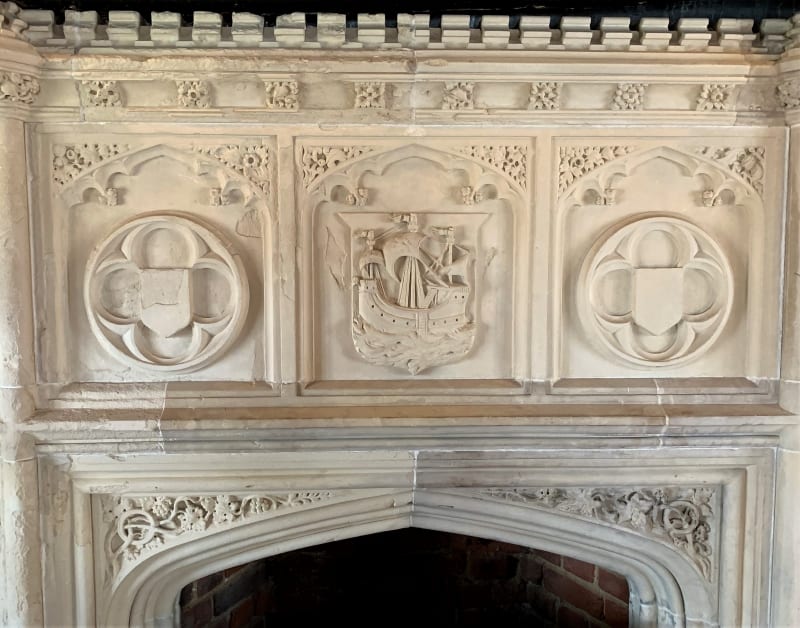 A Tudor fireplace was rescued from a nearby manor house and installed in the museum in the 1920s. It bears the three masted ship of the Aldeburgh seal.

The museum is a fascinating insight into the history of the area; well laid out with a lot of information, a wide variety of subject matter and plenty of hands-on activities to keep kids entertained, but it is the building itself which is the star of the show, and which should be on anyone must-visit list if they are in Suffolk. There are plenty of other historical sites to visit in the area, including Orford Castle and the magnificent Sutton Hoo. You can even stay in an original 1920s house, just a short walk away from the museum.

Visiting Suffolk? If you are planning a trip to the county of Suffolk in south east England, check our Suffolk Travel Guide for History and Adventure Seekers for more recommended sites and museums.