Completed in 2017, the memorial in the Middle Wallop Army Aviation Centre is the only memorial to those who have died during service of British Army flying. Located next to the airfield and the Army Flying Museum, it is a powerfully expressive reminder of the sacrifice many have made over more than a 100 years. 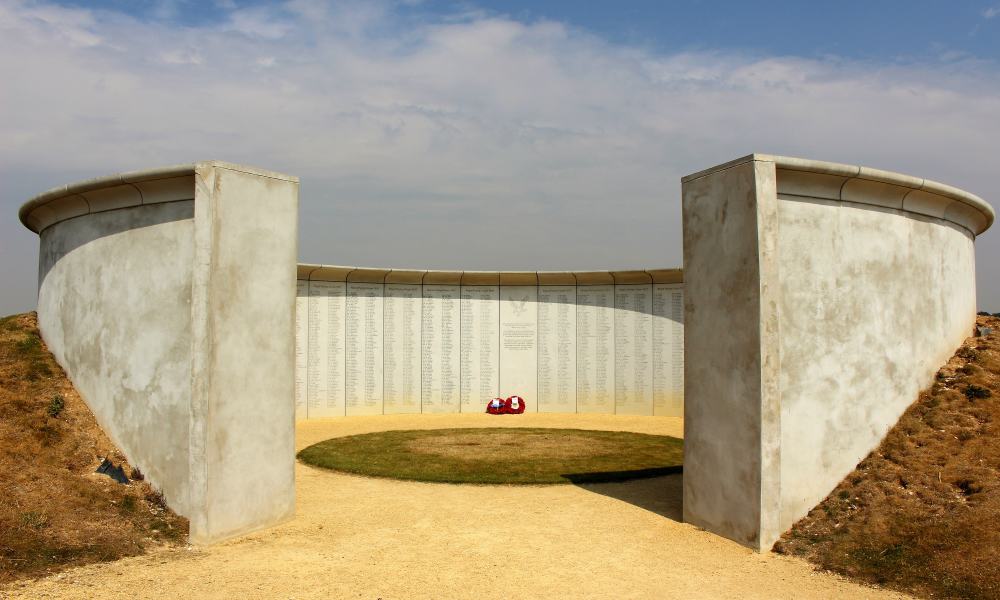 The main memorial is a circular construction which lists the names of all the people who died defending the skies.

Middle Wallop, a small village in Hampshire, has been a military air force base since the 1940s. Originally used for training new pilots in 1940, it was soon being used in the defence of the skies during the Battle of Britain, as well as defence against the Blitz. Initially belonging to the RAF, it was later used by the Royal Navy and the United States Air Force, until it was transferred to the Army Air Corps in the 1950s. Now known as the Army Aviation Centre, it is used for training personnel in both planes and helicopters.

The airfield sits next to the A343 main road between Salisbury and Andover, so it is quite common to have aircraft passing overhead as you drive along the road. The Army Flying War Memorial is in a small field next to the Army Flying Museum, where visitors can park for free. 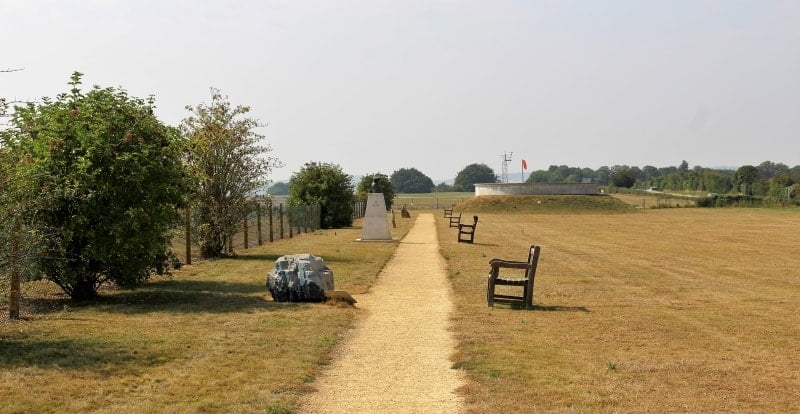 The path to the memorial is lined with smaller memorials and benches, with a view over the airfield.

From the carp park a pathway leads to the circular memorial at the end, where the names of over 5000 pilots are inscribed. Along the pathway are a number of previously existing memorials to men who lost their lives in aviation. These memorials have been relocated here, and serve as a ‘processional route’. Opposite each of these memorials is a bench, for visitors to sit in quiet reflection, as well as to watch the aircraft on the days they are flying. 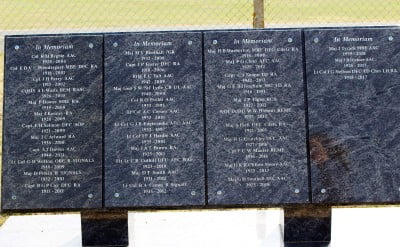 The names of those who served in World War II and survived to old age. 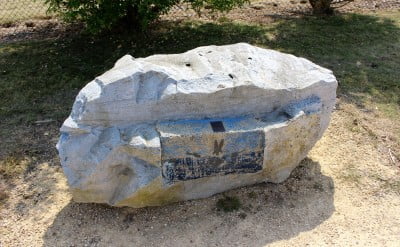 Granite from the Falkland Islands with a small plaque attached.

One of these memorials is a lump of granite from the Falklands. This stone commemorates the Army Air Corps who were stationed on the island from 1982, just after the Falklands War. They provided air support, observation, liaison flights and casualty evacuations, as well as assisting troops in South Georgia until they were disbanded in 1987. 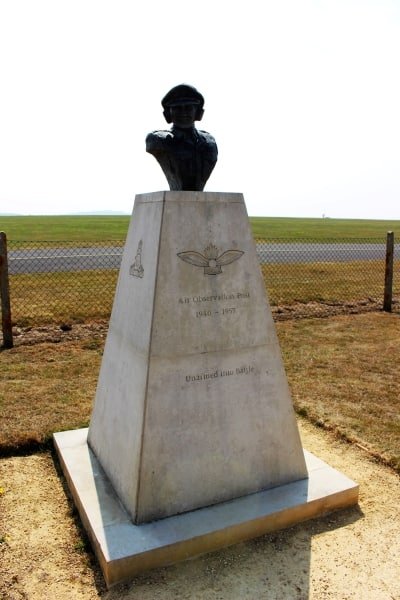 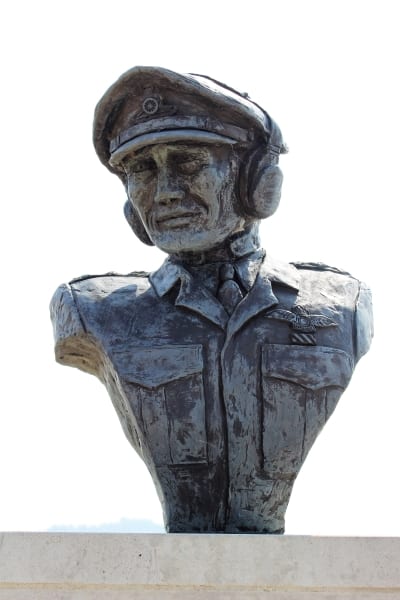 The memorial to the Air Observation Post shows the uniform and headset of the pilots.

The Air Observation Post Squadrons were formed in the early 1940s, as the exisiting method of directing artillery gunfire suffered from delays before targets could be engaged. Using morse code over a one way wireless and liasing between the RAF and artillery was cumbersome and time consuming. So it was proposed that a light aircraft flown by a gunner officer with a two way radio would be more effective.

The inscription on the pedestal says it all, “Unarmed into battle” – as they flew from unprepared airstrips and had to dodge fighter planes by flying using natural features as cover. The AOP squadrons saw action in Tunisia, Sicily and Italy during World War II, as well as Palestine, Korea and Cyprus afterwards, until they were formally disbanded in 1957 and amalgamated into the Army Air Corps. 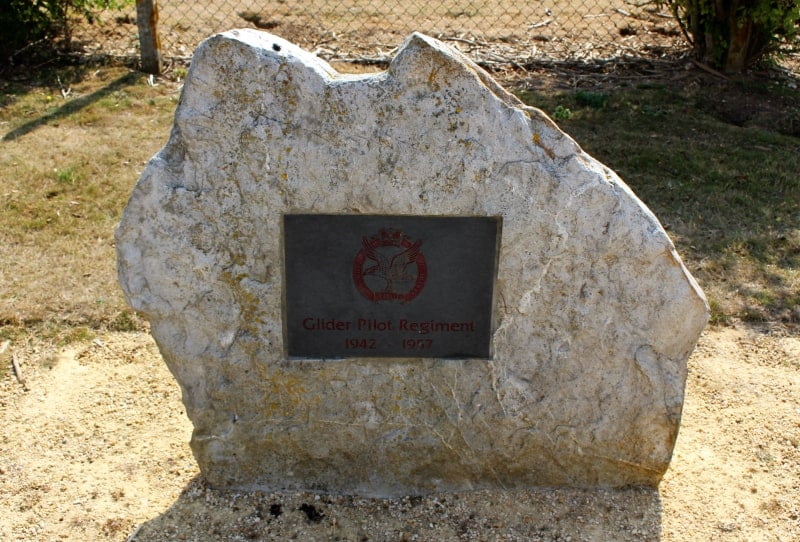 A memorial to the Glider Regiment, whose job was to crash land a plane and then go straight into battle.

There are two further memorials along the path. One for an individual pilot who died at the age of 30, it includes a heartbreaking message from his mother. The other is to the Glider Regiment.

The Glider regiment started during World War II when Churchill saw the need for a unit of parachute and glider borne troops. The first two gliders were used in battle during 1942 over Norway, when sadly both gliders crashed with the loss of all their crew. Gliders continued to be used throughout the war, their peak being during the D-Day landings in Normandy. The Glider Regiment was disbanded in 1957 – the Army Flying Museum has a large section dedicated to their history, as well as a Horsa glider and the largest surviving piece of a Hamilcar glider. 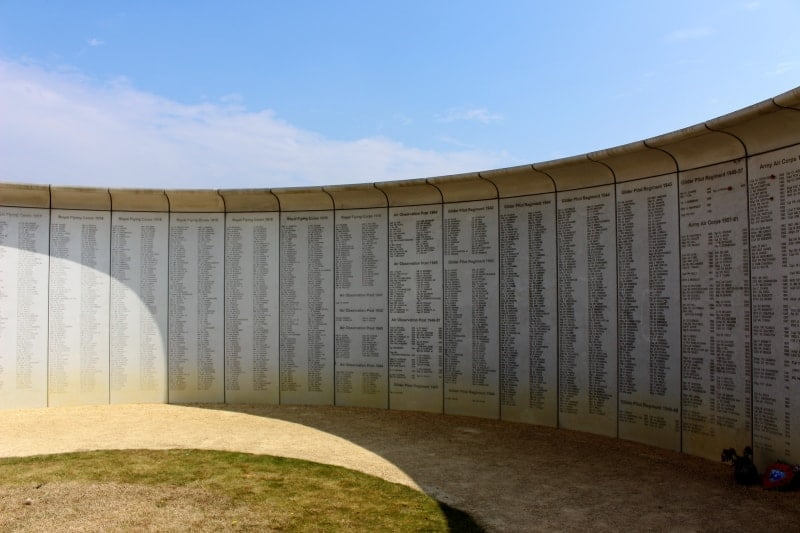 At the end of the path is the Army Flying War Memorial, a circular feature sunken into a mound of grass that is made up of 39 panels. The entrance to the memorial is positioned in such a way that it aligns with the angle of the sun at 11h00 on the 11th of November.

The grassy mound reflects the many ancient burial mounds in the area, as well as the circular barricades used to protect military aircraft on the edges of airfields. Stepping inside the memorial brings your focus to the sky above it and was intended as a space to connect the earth and air. 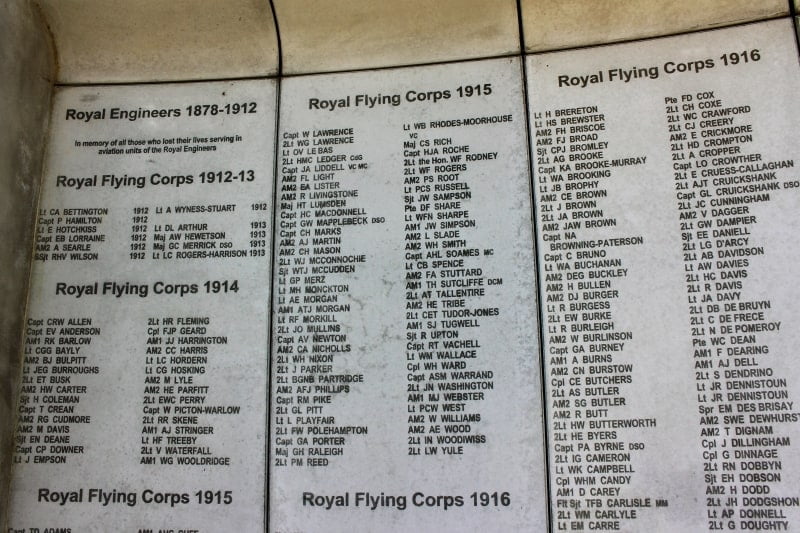 The earliest names start before World War I and include the two who died in the first ever military air crash at Airman’s Cross near Larkhill.

The names inside the memorial start with the very earliest deaths of men who served in the aviation units of the Royal Engineers between 1878 and 1912; those that started the use of flight in the military. As you walk around the memorial, you see that at least three quarters of it just goes up to 1918, which is a staggering statistic. A large proportion of the remainder is World War II. There are more recent deaths too, the last one being 2019. Altogether there are over 5127 names inscribed on the monument, from the Royal Flying Corps, Air Observation, Glider Regiments and today’s Army Air Corps. 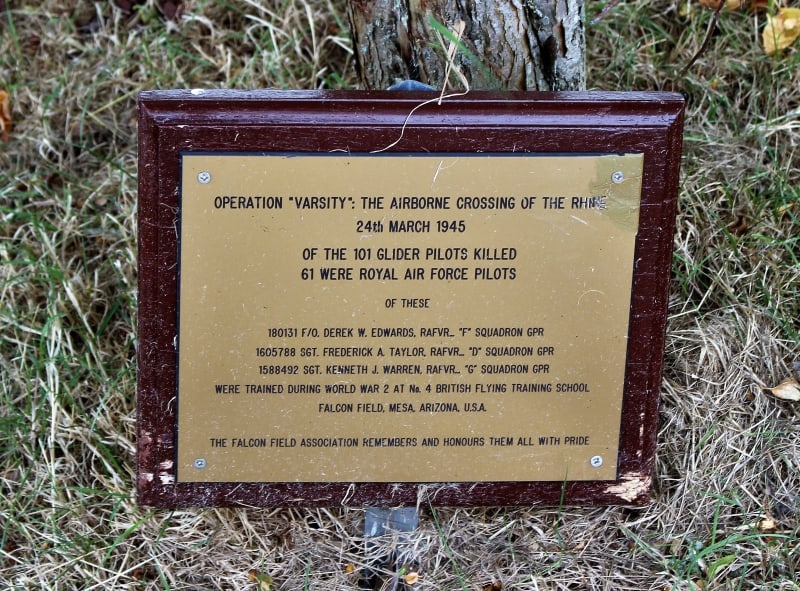 Each tree and bush has a memorial to a different person or event involved in the Army Air Corps and its predecessors.

It is a poignant memorial, a very peaceful space next to the airfield and the Army Flying Museum. When you walk back up the path towards the museum, you see that all of the trees and bushes around the museum each have a little plaque, dedicated to individuals or to whole military operations. It is worth wandering through the greenery to have a read of some of these. With an old plane, helicopter and tank parked outside the museum, the flags and the multitude of plaques and memorials, it feels as if the whole outside area is a fitting tribute to the people who gave so much to defend the skies.

There is an online memorial which gives the names of each person listed on the monument, which can be found in the British Army Flying Memorial Book of Rememberance.

The Army Flying Museum, with the memorial next to it, can be found on our Interactive Map of Archaeology And History Sites and Museums in England. Use the map for directions and to search for other historical places of interest to visit nearby.