Visiting Mont Saint-Michel: A Tidal Island With An Abbey

Mont Saint Michel is one of the most visited tourist attractions in France outside of Paris. Visitors come in their millions each year to see this extraordinary feat of medieval architecture. There is no Mont Saint Michel Castle. Rather what you will find is a unique medieval abbey with a diversity of architectural styles, most notably the 13th century, Gothic abbey. But, how do you get to visit Mont Saint Michel and explore the abbey without the crowds? 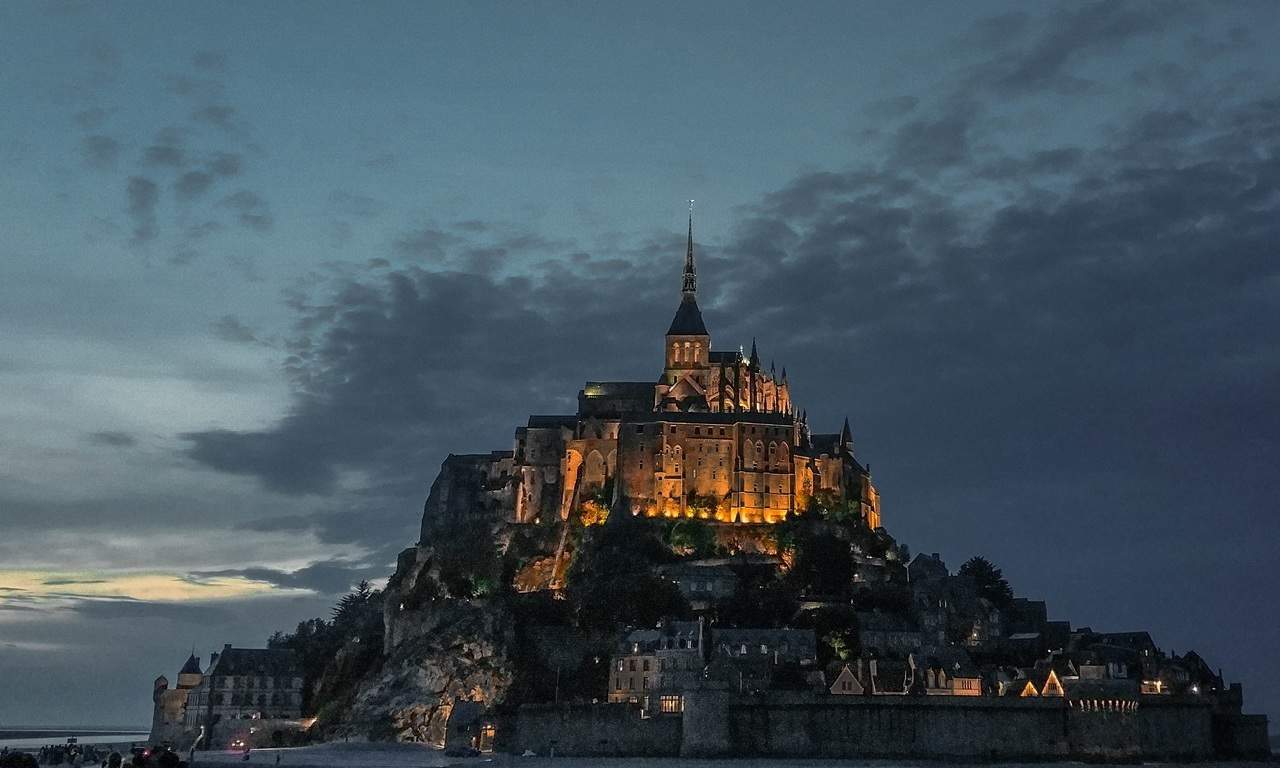 Mont Saint Michel with its beautifully lit abbey in the evening, no wonder it is referred to as La Merveille, the wonder.

Mont Saint Michel is a village and abbey that really is truly unlike any other. Not even St Michael’s Mount, once a Norman Priory on the other side of La Manche, comes close. Here medieval builders were constrained by the natural pyramidal shape of the granite outcrop, and so created an abbey in three stories.

What is Mont Saint Michel?

Mont Saint Michel is a tidal island with a fortified medieval village that developed beneath a Benedictine abbey. Contrary to popular belief, there is no Mont Saint Michel Castle. Geologically the tidal island was created when an intrusion of molten magma from about 525 million years ago was left exposed when sea levels rose and the softer surrounding rock eroded away. The islet is not very big, at only 960 m in circumference and the highest point is only 92 m above sea level, covering an area of about 7 hectares.

Where is Mont Saint Michel?

The tidal island is around 1 km off the Normandy coastline in the mouth of the Couesnon River, a few kilometres from the Normandy/Brittany border in north western France.

A sanctuary dedicated to Archangel St Michel was established in 708 AD. A pre-Romanesque chapel was built in the 10th century AD, and the Romanesque church a century or so later. Much of the Benedictine Abbey we see today was built between the 13th century, but modifications and restorations continued until the 19th century. The fortifications at sea level were constructed during the 14th century and the Hundred Years’ War between England and France.

What is La Merveille?

La Merveille, French for ‘the marvel’, refers to the 13th century Gothic abbey that was built on and incorporated the 11th century Romanesque Abbey. Given the shape of the tidal island, medieval builders constructed the abbey in three levels to a height of 35 m, and now considered the ‘jewel in the crown’ of the monastic site.

Why Was the Abbey Built Here?

Legend has it that the Bishop of nearby Avranches received orders in his dreams from the Archangel Michael to built a chapel on the tidal island. Aubert (the bishop) had a sanctuary built in 708 AD. Over the centuries the locations became a popular destination for pilgrims and so it grew and developed.

Can You Stay Overnight on Mont Saint Michel?

Yes. There are a few hotels on the island in which you can stay. Although not terribly expensive, they do fill up fast – see a list on Booking.com

At the very top is the abbey church and cloisters, which are made possible by a series of underlying crypts and buttresses. Mont Saint Michel has a long history, the earliest documented evidence of which dates back to the start of the eight century AD. The Bishop of Avranches is said to have been given divine instruction from Archangel Michael to build a monastery on what was then called Mont-Tombe. It soon became a pilgrimage destination, and by the 10th century the abbey had been settled by Benedictine monks. The abbey was built with the church at the pinnacle, while a village developed at the foot of the granite outcrop.

During the Hundred Years War substantial ramparts and fortifications were built around the edge of the isle to resist the English. A few hundred years later after the Revolution in 1789, the religious community was dissolved and the abbey used as a prison until 1863.

Mont Saint Michel was classified as a historic monument in 1874, and underwent major renovations, which continue until this day. It was added to the UNESCO list of World Heritage Sites in 1979. A multi-million Euro project started in 2009 to reverse the permanent causeway that joins the island with the mainland (for progress, see Mont Saint-Michel, June 2013). 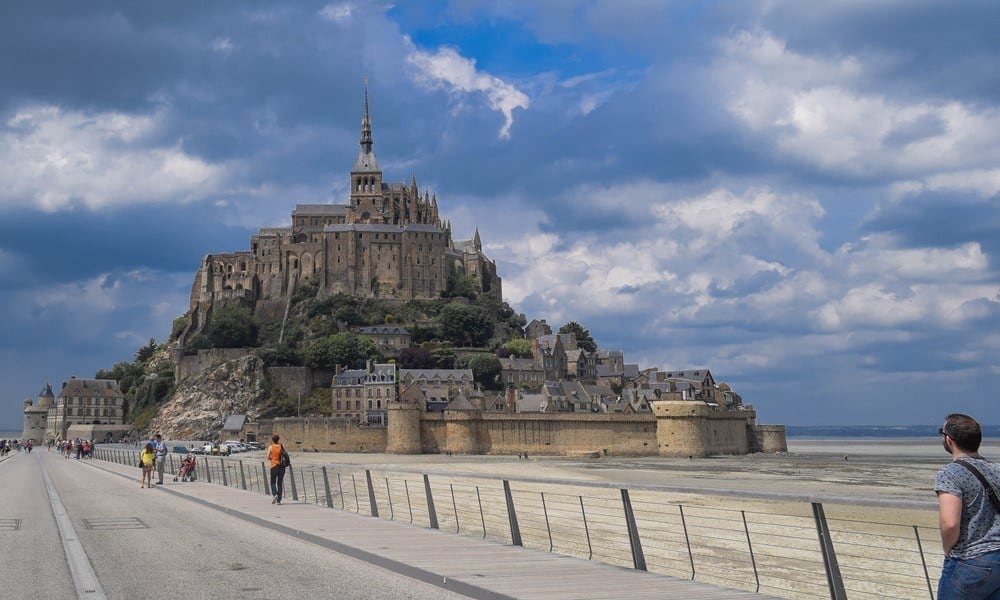 Now that Mont Saint-Michel is a tidal island, you either walk across the bridge or catch a bus. 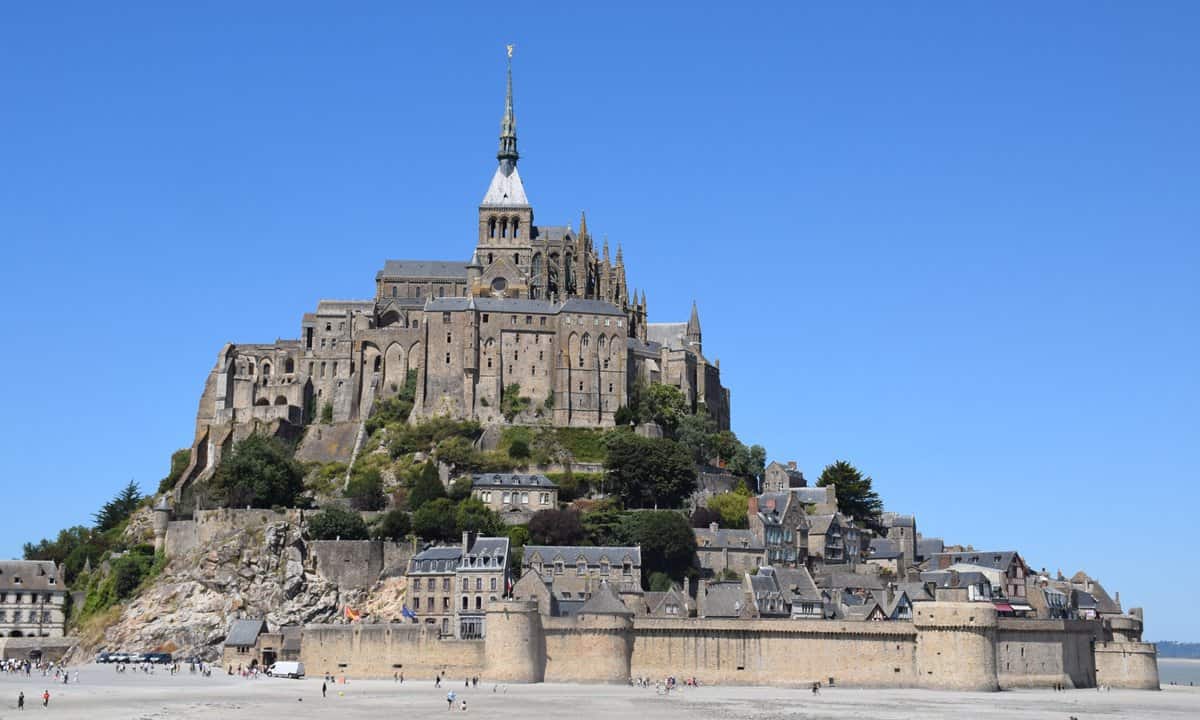 The ramparts of Mont Saint Michel are at their most visible during low tide.

By the 14th century the village that had developed outside the walls of the abbey had reached the water. The strategic importance of the island became more obvious with the onset of the Hundred Year’s War between the French and English. New more imposing fortifications were erected in the early 14th century, creating an impregnable fortress for the Duchy of Normandy. The island was defended by knights loyal to the King of France. The wall and defensive towers resisted English assaults and attacks for nearly 30 years.

Long gone are the days where you could drive up to a car park just at the entrance to Mont-Saint-Michel. The initiative to make Mont-Saint-Michel an island once again precludes this possibility. Which is a good thing for at least two reasons: not only was traffic at the busiest times of the day during the peak holiday season a nightmare, a car park directly in from of the Abbey is unsightly. Now, everyone accesses Mont-Saint-Michel either on foot or shuttle. There is also a horse-drawn cart available for hire for adding to your experience.

All aspects of accessing Mont-Saint-Michel has been expertly designed for visitors with reduced mobility: there are no steps or height differences on the roads and paths, lighting that facilitates movement in the dark hours, and wide pathways are free of obstacles.

If you are making a day trip to Mont-Saint-Michel by car, you are required to park your car in the new parking area located just behind the strip of hotels on the main road in La Caserne. The free shuttle service runs from the car park, on to the main road running through La Caserne, and then onto the causeway and to within 400 meters of the entrance to Mon-Saint-Michel. The shuttle service runs regularly, depending on the numbers of visitors, from 8 am to 1 am between La Caserne and Mont-Saint-Michel.

The causeway road has a footpath, a gentle walk takes about 20 mins. Bicycles are no longer allowed to be taken to Mont-Saint-Michel. There are two facilities available for cyclists to lock bicycles and then proceed on foot or by shuttle: one is located in the car park, and the other is at the dam wall near the start of the causeway road leading to Mont-Saint-Michel.

If you are staying overnight in one of the hotels in La Caserne, you will be given an access code when you secure your reservation. You will be required to enter this code at the entrance to the restricted area of La Caserne to gain access to the hotel’s car park.

Visiting the tidal island Mont Saint Michel and Mont Saint Michel Abbey are not the same thing. Access to the island is free of charge. You can explore the medieval village and walk along the ramparts. There are a number of restaurants on the island that serve full meals. And there are also a number of places to get light snacks. Of course there are the ubiquitous souvenir shops. There are four museums to visit – these are not free. And then there is the abbey – see details below for more information.

A multimedia presentation showing the building of the abbey.

A typical local history museum, detailing the 1,300 years of the island’s past.

The house of Tiphaine de Raguenel, an astrologer and the wife of Bertrand Du Guesclin – a distinguished knight during the Hundred Years’ War.

Explores the maritime history of Mont Saint Michel, including a collection of some 250 models of ships.

Adults €11.00
Youth under 18 Free
Buy a Priority Entrance Ticket for the Mont Saint Michel Abbey online from Tiqets or GetYourGuide.

If you are already at Mont Saint Michel, or you do not need transport to the island and all you want is a guided tour, a local guide can give you a two-hour tour.

To see the location of Mont Saint Michel on a map, click through to our Interactive Map of France. On the map you will be able to get directions to Mont Saint Michel from a location of your choice, as well as take a virtual tour of the island (not the abbey). Change the map to satellite view and then drag the yellow pegman (lower right) onto the map. You can follow the blue paths through the medieval streets or follow a path around the edge of the tidal island. 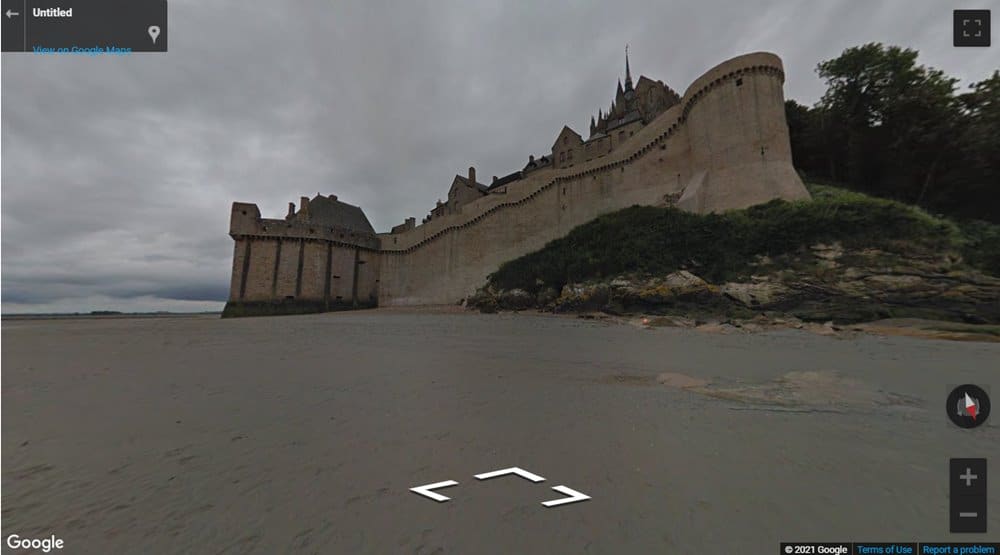 Virtual tour of Mont Saint Michel: with our Interactive Map of France, using the Google maps platform, you can take a virtual walk around the tidal island as well as walking through the medieval streets inside the fortifications. Unfortunately it is not possible to tour inside the abbey on Google maps.

Tips for Visiting Mont Saint Michel and the Abbey

As Mont Saint-Michel is France’s most visited attraction outside of Paris, it is always busy. My tip to beat the crowds is to get on to the island early, around 8 am (earlier if you would like to walk around the village and take photographs).

Go straight to the entrance to the Abbey, which opens at 9 am in summer (May to August) and 9.30 am from September to April.

If staying overnight in one of the hotels at La Caserne, they will sell you a ticket – buy one!

At low tide it is tempting to walk on the sand around the island. Only do this where there are lots of people, or by taking a local guide who knows the tide times and where the dangerous quicksands are.