In July 2021 the Humboldt Forum finally opened its doors. Over some 800 years the location of Berlin’s newest cultural landmark has changed remarkably. Having been the site of some momentous events in European and world history. Following the reunification of Germany and considerable debate, it was agreed to partially reconstruct the great Baroque Berlin Palace to provide a new cultural space in the city. Exhibitions and events drawing on the collections and work of four cultural and scientific institutions in Berlin.

The information on this page was last checked and/or updated on 31 August 2020. 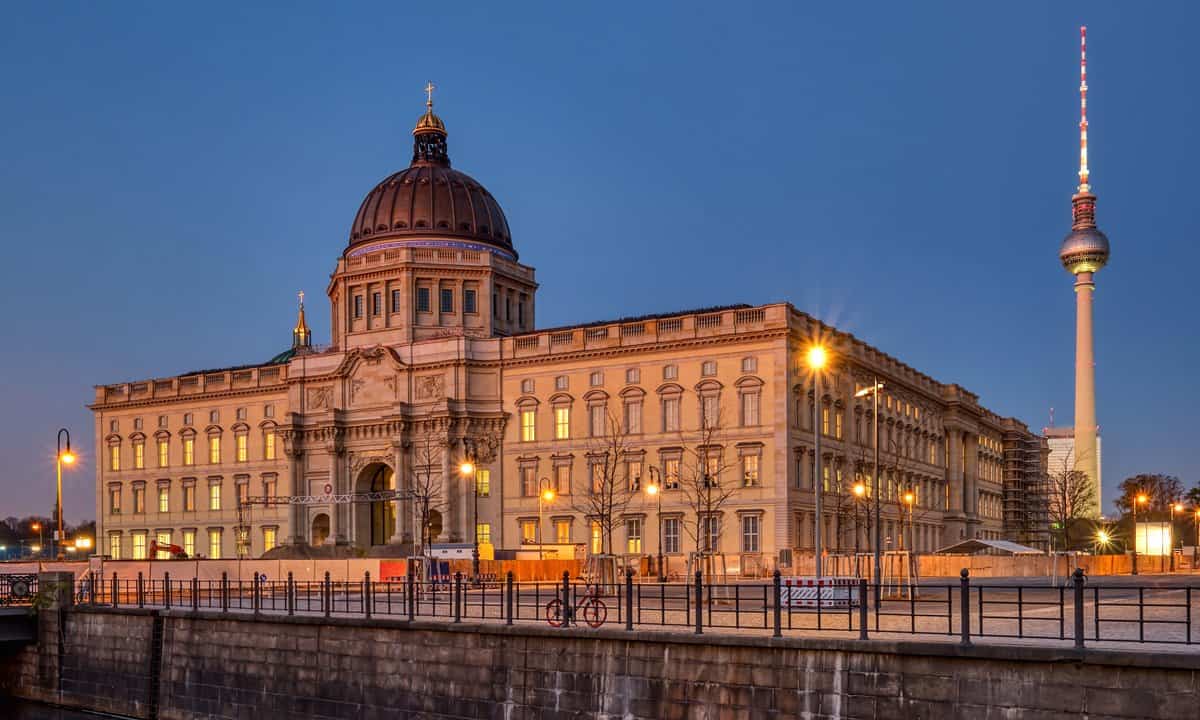 Looking north east towards the Humboldt Forum, with the TV Tower in the background, a reconstructed Eosander Portal serves as the main entrance, just as it did for the Berlin Palace.

What is the Humbolt Forum?

The Humboldt Forum takes both its name and inspiration from Wilhelm and Alexander von Humboldt. Brothers who had a profound effect on the way in which cultural and scientific thought developed in the 19th century. Wilhelm (1767 – 1835) is known for promoting what has become known as the Humboldtian Model of education. For him a greater understanding of cultural knowledge comes when the arts and sciences come together in research. The Humboldt University in Berlin, founded by Wilhelm, still follows the principles he set for research-based education.

Alexander (1769 – 1859), a geographer well known for exploring the Americas, also advocated a holistic approach to the sciences and culture. His book ‘Kosmos’, published in 1800, is one of the first to suggest a link between climate change and human activity. These intellectual ideals of bringing together the sciences, arts and educating to promote a dialogue between academics and the broader public is what is at the heart of the innovative approach taken by the Humboldt Forum.

Together these organisations will direct a programme of exhibitions, both permanent and temporary, and events centred on their respective collections and activities. 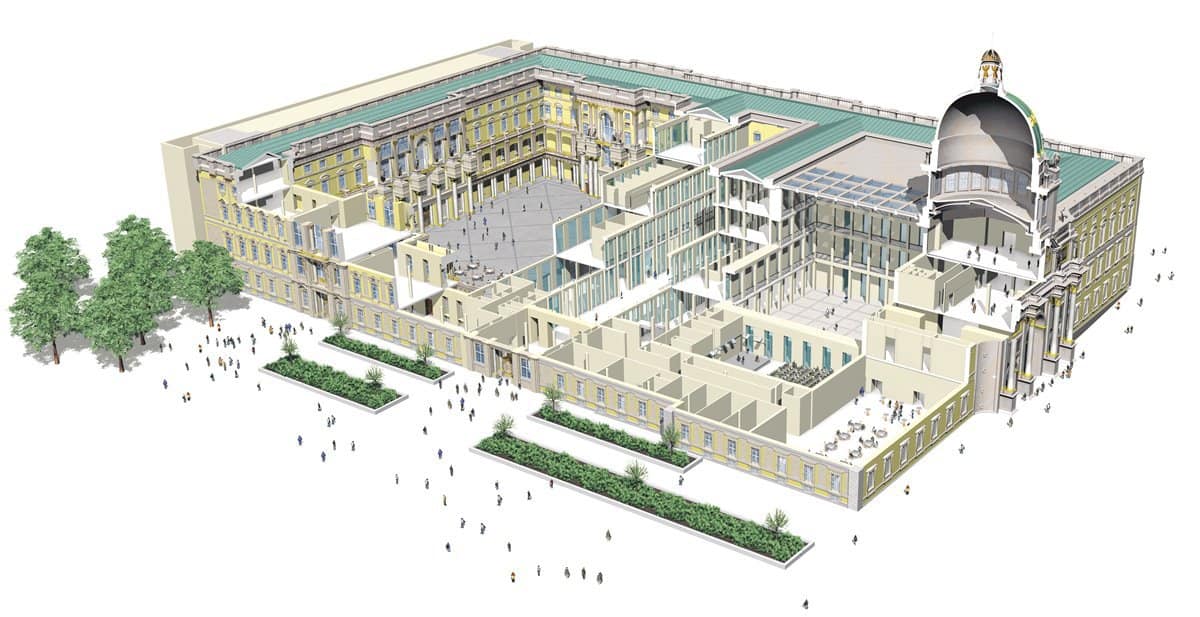 A Brief History of Schloßplatz

For a long time the site on which the Humboldt Forum now stand has been known as Schloßplatz, or castle square. The castle that stood here until it was demolished in the 1950s was the principal royal residence of the Hohenzollern Dynasty from 1443. These were the Electors of Brandenburg, the Kings of Prussia and the German Emperors.

But the site, on an island in the Spree River, has much more humble origins.

The island and the eastern bank of the river is where the two neighbouring towns of Cölln and Berlin were situated, respectively. The fact that we know so little about their founding (unlike nearby Spandau and Köpenick, for example) is a good indication of how unimportant these two settlements were to begin with. As Cölln began to grow a Dominican monastery was established here at the beginning of the 14th century. And in the mid 15th century the Hohenzollern family then the Electors of Brandenburg, chose to build a palace next to the monastery.

No doubt, the establishment of the royal palace here changed the course of history for the twin towns on the Spree.

Over the centuries the palace changed substantially, and the monastery dissolved. Most notably at the end of the 17th century the Renaissance palace was transformed into an extravagant Baroque palace for Frederick William II of Prussia. It was his son, Frederick William III, who in 1830 had what we now know of as the Altes Museum built across the garden (Lustgarten) from the palace. This was the first of the five museums that make up Museumsinsel.

In 1871, following the unification of Germany and the moment the King of Prussia became Kaiser (Emperor), the palace served as the symbolic and ceremonial centre of the German Empire. Four hundred years of royal occupation of the Stadtschloss would come to an end when in November 1918 from one of the balconies of the castle, Karl Liebknecht declared the German Socialist Republic, the so called Weimar Republic. Although the palace continued to be used for certain state events, its main function was to serve as a public museum.

The National Socialists did not pay much attention to the palace, preferring instead the Lustgarten between the palace and the Altes Museum. It was here that they held their first big rally in 1932. Near the end of World War II, in February the palace was twice the target of allied bombing campaigns. While the roof was totally destroyed and the interior largely burned out, the building was structurally sound. As the palace fell under Soviet control following the end of the War, decisions about its future lay with the German Democratic Republic when Germany was divided.

Like many other buildings that suffered significant damage during the War, the palace could have been restored. But the Socialists chose destruction over restoration. But not before saving that part of the façade that held the balcony on which had declared Germany a Socialist Republic in 1918. This section was placed on a building, the State Council Building, that would house the State Council of the GDR from 1964 to 1991. This building still stands, with the balcony, and is now the European School of Management and Technology.

The Socialists erected a new Modernist palace in the 1970s, the Palast der Republik. It would become known as the ‘People’s Palace’, because it not only housed the East German parliament it also had facilities for various cultural and social events, including art galleries and theatres, restaurants and shops, and even a disco hall. All activities were kept under close surveillance by the Stasi.

Opened in 1976, the People’s Palace did not last long. It was shut in 1990 due to the considerable amount of asbestos used in its construction. In 2003 the reunified German government chose to replace the Socialist’s palace with a replica of Berlin’s Stadtschloss. 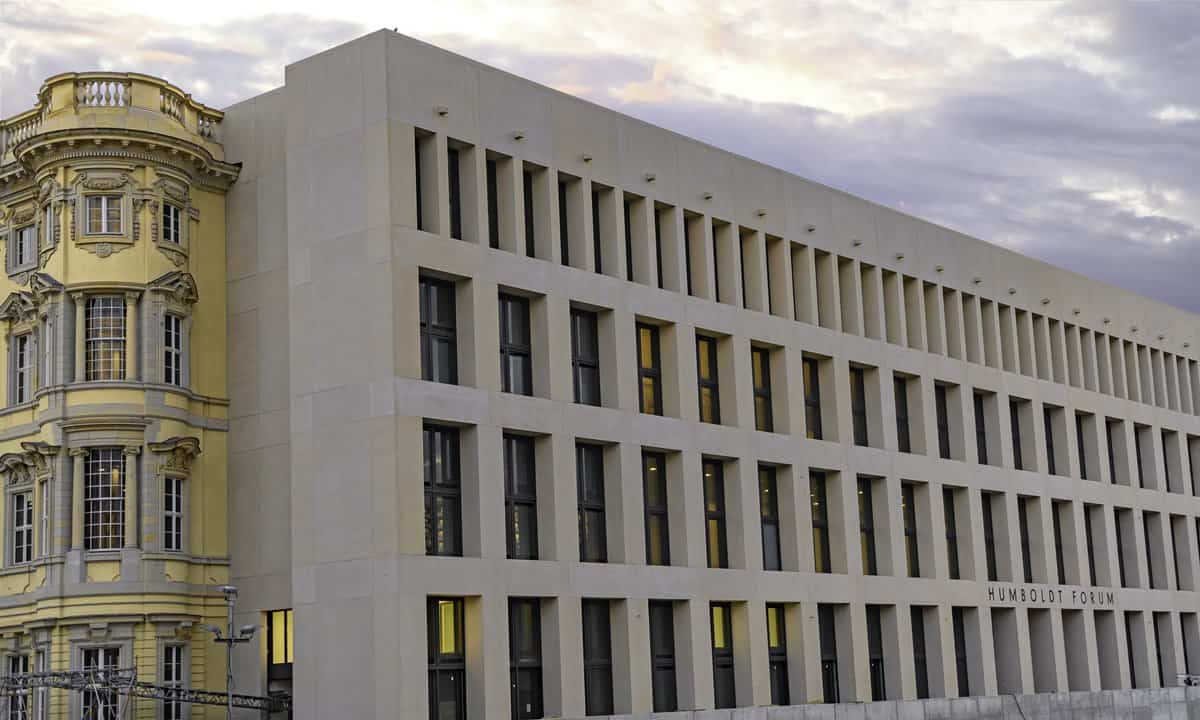 Baroque reconstruction meets new design at the eastern corner of the Humboldt Forum.

Controversies and the Humboldt Forum

Given the site of the Humboldt Forum, and more specifically the 800 year history of this location, it is not surprising that the project would be a controversial one. As multilayered is the history, so too the controversy. The cost of the construction, the purpose of the forum, almost every step of the project has had its share of debate and discussion.

After the reunification of Germany, and Berlin, the association of the Palast de Republik with the Stasi made it an obvious target for destruction, if not the controversial use of asbestos in its construction. Former residents of East Berlin were opposed to the destruction of their ‘People’s Palace’. And going further back, I can not help wondering whether there was any opposition from the monks to the Dominican monastery being destroyed to make way for a grander Royal palace.

The Cupola and Cross

If building a replica of the Berliner Palace was not controversial enough, adding of a cupola and cross to the dome above the entrance to the Humboldt Forum continues to attract strong feelings. Views and emotions that were reignited when the cupola and cross were lifted into place at the end of May in 2020. The issue is not just with the cross being added to Berlin’s skyline, also an inscription by King Friedrich Wilhelm IV calling on all peoples to submit to Christianity when the original dome was built in the 1840s.

These are complex issues, and it does not help that the media has characterised this debate as a “squabble”. Not only is that unhelpful and wrong, it is grossly insensitive and naïve.

For anyone interested in reading more about this, the Humboldt Forum have compiled what I think is a very helpful dossier. This can be read on their website: What’s it all about? The cross on top of the Humboldt Forum’s cupola 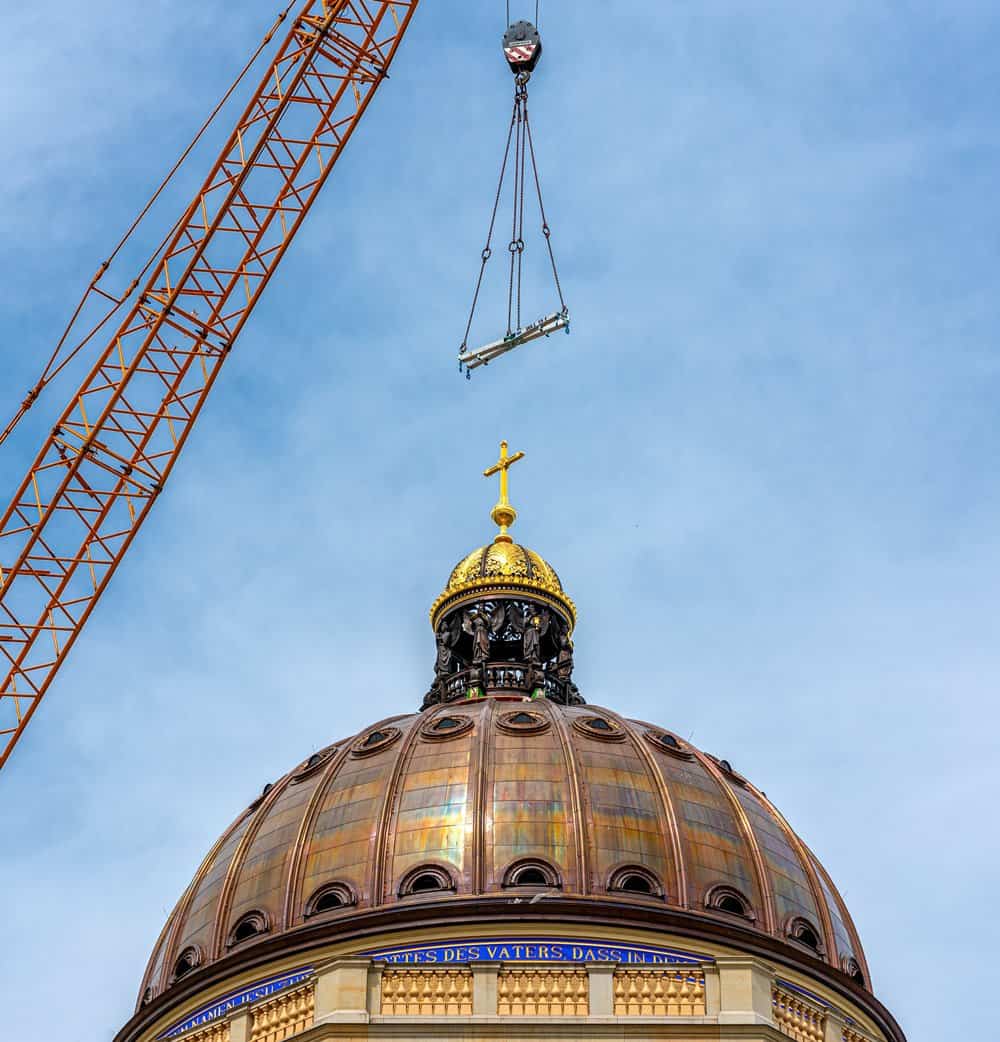 The gold cupola and cross lifted into place on the dome above the entrance to the Humboldt Forum.

Colonial Origins of the Collections

Given the Humboldt Forum will be home to the Berlin State Museum’s Ethnological Museum, this institution is obviously implicated in debates about colonial collections in European museums, in particular who has the right to own and display these collections.

Much has been published on this issue in the last few months, particularly as a result of the events of the summer 2020. A very readable and sensitive essay by Jacob Kushner has been published by the National Geographic: In Germany, a new museum stirs up a colonial controversy. 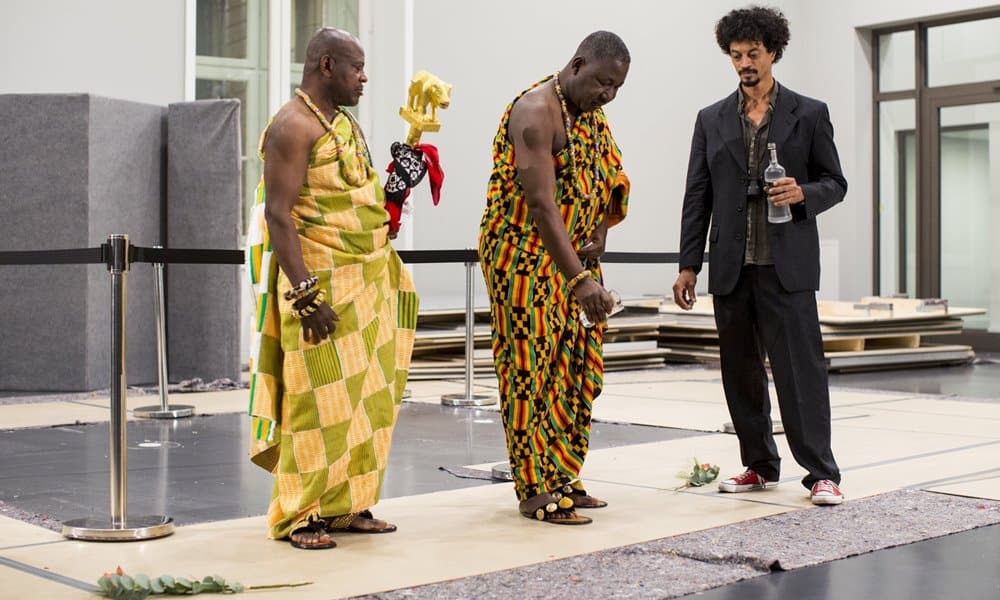 The invisible sculpture in the Humboldt Forum was dedicated with a rite by the Akan people from Ghana. © Kulturprojekte Berlin and Stiftung Stadtmuseum Berlin, photograph: Louisa Marie Summer

Exhibitions: What’s On At the Humbolt Forum In 2021

Due to the current global situation and restrictions that apply to the use of public spaces, exact details and dates have not been released for when the permanent and temporary exhibitions will open in 2021 at the Humboldt Forum. This is what we do know. In the meantime, watch the digital preview, streamed live around the world on 16 December 2020.

History of the Site

There will be four permanent exhibitions that cover the 800 year history that culminates in the Humboldt Forum. For example, remains of the medieval monastery and the cellars of the Berlin Palace have been preserved and can be seen in the basement. Also, a 28 metre long video wall presents the story of the Dominican monastery cellar. Tall stone figures and other ornamentation from the Baroque palace façades are on display in the sculpture hall. These exhibitions will be accessible as soon as the Humboldt Forum opens to the public when restrictions are lifted.

Also opening from the start will be the inaugural exhibition of the Humboldt Laboratory. On temporary display will be the research of the Humboldt University of Berlin and their partners. In confronting the global climate crisis, the focus of these displays is the relationship between nature and the environment, and global politics.

Another permanent exhibition that will explore the way in which global developments have shaped the city of Berlin, but also how events within the city have impacted on the world. Part of this exhibition will focus on responsibility for actions during the colonial era and how traces of this can still be seen and experienced in Berlin today.

It is hoped that from late summer in 2021 the permanent displays of the internationally renowned collections of the Ethnological and Asian Art museums will open to the public. These will be housed in the upper floors of the Humboldt Forum. These displays will entail an estimated 20,000 artefacts spread across 14,000 square metres. Besides exploring the cultural significance of these objects, displays will also confront rather than shy away from how these numerous objects came to be in European institutions.

Scheduled for 13 May to 24 October, restrictions permitting. This temporary exhibition draws on collections of the Ethnological Museum and the Museum of Asian Art to explore the artistic and historical significance of ivory. From carvings made from ivory thousands of years ago, to actions of colonialists in pursuit of ivory, especially in Africa.